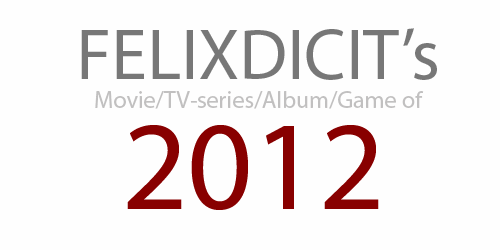 As the clock is slowly ticking away, counting down the final moments of this year, it is time to recap 2012. What movies, what games or what albums were either very good, or very bad. As I can’t have total knowledge of everything that was released the last 366 days, I will stick with whatever I’ve seen, listened to or played. I wanted to include books to this list, but I haven’t really read any books for the purpose of entertainment; if I’d read anything at all, it would have been studying material. A little disclaimer beforehand: I only watch/play/listen to stuff I would want to watch/play/listen to, so ‘the worst X of 2012’ will probably be the movie/game/album that was the biggest let-down for me. This list is therefore highly subjective. So let’s kick off with movies, after the jump.

I had seen all of the movies leading up to this film. The Incredible Hulk, Iron Man 1 and 2, Captain America and Thor. I thought, with the exception of Iron Man 1, they where all mediocre at best. My expectations for The Avengers therefore weren’t really high. Until I saw the first (raving) reviews. Together with a few housemates, I went to the cinema. The reviews where right. This could have been the most fun I ever had watching a movie. It isn’t really high-brow, but it is just plain fun. There were a lot of other good movies, but none of them entertained me as much as this one did, hence this is my ‘Best Movie of 2012’.

Chris Pine (Star Trek) and Tom Hardy (The Dark Knight Rises) fight for the love of Reese Witherspoon, seems like a normal romantic comedy. One little twist though: Pine and Hardy are to partnering CIA operatives, and use their equipment to compete. Things just got a little bit interesting. I saw a trailer for this film in the local cinema, which was, I have to say, an excellent trailer. But it was also very deceiving. The trailer contained every good part of the movie. The rest was filled with annoying tidbits of Reese Witherspoon contemplating which guy to choose. The fact that the trailer spoiled every good part of the movie, and the fact that it was mostly Reese Witherspoon whining, made this movie a big disappointment for me. Which means it is my ‘Worst Movie of 2012’.

I had to think a long time about this one. Should I pick The Walking Dead (season 3) or Game of Thrones (season 2)? Then I remembered: these seasons aren’t really better than their predecessors (season 2 and season 1 respectively). The only season that completely blew me out of the water was season 2 of Suits. Where season 1 primarily focussed on the struggling Mike Ross had to endure, the second season was about the predicament the firm Pearson & Hawthorn as a whole was in. The season ended 23rd of August… or did it? Apparently, there are six new episodes planned for this season, which are looking at a release somewhere in January through February. Even without those six episodes, season 2 of Suits easily became the best TV-series season of 2012. I am extremely curious to the rest of the season.

I’m starting to get frustrated with this show. It drags on and on, with nothing really happening. Yes, it is a very big and popular show, earning its creators a lot of money. Ofcourse they want to keep it on air for as long as possible, which means they have to smear out the story longer than they had expected to. But if they keep this up, ratings will drop in an alarming rate, meaning it will get canceled within two years. Which is fine. I only watch this series as a force of habit, not because I really like it. I think there are a lot of people feeling the same about this. Please NBC, get on with it. I want to remember HIMYM fondly, but you are making it extremely hard for me.

I didn’t know Caspian, but I do know that I like post rock. There are a few bands in that specific genre that I like, like Red Sparowes, Faunts and Mogwai. Caspian is basically all of these bands combined. It’ is sometimes melodic, sometimes more guitar oriented, but all around very atmospheric. A great album. There weren’t any albums in 2012 which have captivated me the way ‘Waking Season’ did. Therefore, it is my ‘Best Album of 2012’.

Muse. I’ve loved this band ever since ‘Black Holes and Revelations’, which was released in 2006. Their long and trippy guitar solo’s, sometimes guided by a catchy piano-tune, and don’t forget their awesome live performances. Muse is a band I regard highly. That is, until they released ‘The 2nd Law’. It has some songs which I think are mediocre, but the rest is sub-par. Whiny rock ballads, sometimes complemented with annoying dubstep. No. I hope Muse find the way back to creating good music. Meanwhile, ‘The 2nd Law’ has earned FELIXDICIT.com’s ‘Worst Album of 2012’.

Somewhere this year, I watched all of the available ‘The Walking Dead’ episodes during a few quiet night shifts. I became addicted to the series. Waiting for new episodes became a real burden, so when I saw there was a game coming out I had to buy it. For about 25€, it promised five episodes containing about 2,5 hours of gameplay each episode. It started out awesome, but then I had to wait for the second episode, which they promised would be released a month after the release of the first. A month passed, and nothing happened. It took another month for it to release. This continued a few times, and eventually the final episode was released about 2,5 months behind schedule. But it was worth it. Totally worth it. No other game has made me be as emotionally engaged to the characters as this game did. Amazing storytelling, all around. Truly, the ‘Best Game of 2012’. (You can win this game with the Holiday Game Giveaway, link above this page)

I was hyped for this game. I had played a fair amount of Monday Night Combat, it’s predecessor, but that didn’t have a large player base and most servers where empty. Super Monday Night Combat was going to be a free-to-play game, meaning it was actually free to download and play the game, you only had to pay for customisation items. I played it, and wasn’t entirely convinced. A lot of changes had been made (for instance, no rebuildable turrets) meaning that it didn’t capture the magic moments I had with its predecessor. On top of that, the community didn’t grow. There where, after the initial launch, a maximum of 1000 players online, divided over three servers. Matchmaking took about three minutes, meaning you had to wait three minutes before you could start playing. After a few months, even those 1000 players stopped playing, which resulted in a waiting game, sometimes having to wait more than 10 minutes before being dropped in a server. Eventually, I gave up on it, having played only about 15 hours. That is why this game is my worst game of 2012, sadly.