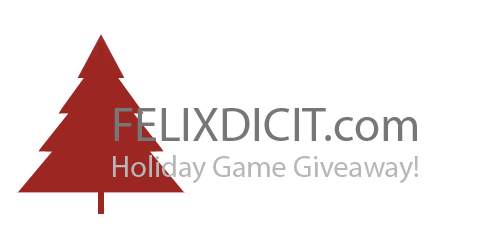 It’s almost the end of 2012 and the holidays are fast approaching. Whether it’s Christmas or Hanukkah, or simply the end of 2012, there is a reason to celebrate. As I want to give something back to my faithful readers, I’m going to organize a game-giveaway.Which games, and what you have to do for it to get one, is going to be explained below.

What you have to do:

Is that it? Yes. Which games will be given away?

How it’s going to go down. On January 1st, 2013, I will randomly select people using a randomizer program who I will personally approach. The one who gets picked first, gets first pick, etc. If there are games left once everyone has had their pick, the resulting games will stay in my Steam inventory and will probably be used in a future giveaway. It might take a while for everyone to respond in time, so if you don’t respond within 24 hours, I’m going to have to put you back in the order of which the program has chosen.

If you already like Felixdicit.com and don’t want any games, or you already have the games listed above, you can forward my gift to someone you’d think would appreciate it.