This is the story of my Football Manager career, playing with my local team: ADO den Haag. At the end of every season I will recap the season here. Here’s season 1, this is season 2.

The second season. Notably harder than the first, because ever since I’ve met my goal of 10th place in the Eredivisie, my players are in high demand with other clubs. Like vultures do the scouts of other clubs descend down upon my team, and because of the financial issues my club has, there’s nothing I can do about it. The best I can do is hope I can keep the overall structure of the club and maybe loose a few vital players and contracting some free agents. Zuiverloon, Loovens, van Haaren en Gouriye, I was sad to see them leave. Cabral went back to FC Twente after his loan spell had finished. I had to do something back on the transfer market, and so I did. 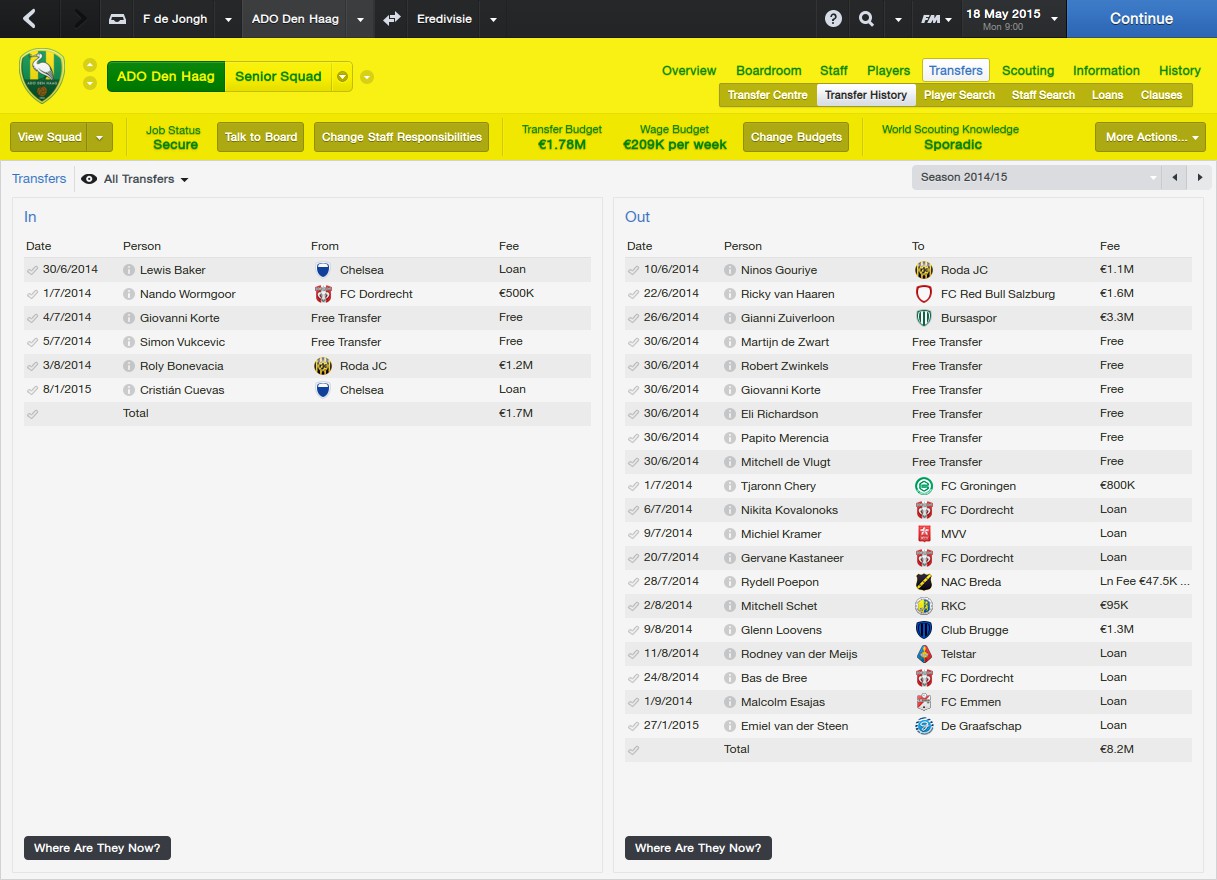 I hired a promising winger from Chelsea (Baker) to combat the loss of Cabral. Nando Wormgoor, little brother of Vito Wormgoor, came in as back-up to Beugelsdijk and his older brother, my starting picks for the central defence. I let go of a lot of unusable players to press the wage bill, which would otherwise ruin my next season as well. I also loaned out some promising youngsters, as I didn’t have a place for them in the starting eleven or on the bench. Former Ajax-youngster Roly Bonevacia came in as a replacement for van Haaren, and Simon Vukcevic (a player who I’ve signed ever since FM2008) came free of charge as an investment in the depth of the entire attacking force. With all these transfers, I was sure I was ready for the coming season, with a minimum result of 10th. Anything below that would result in my (forced) resignation. Unfortunately, I had forgotten I had to arrange friendlies in preparation of the season myself, which resulted in my players not being physically fit for the start of the season at all. Beginners mistake.

The Season (2014-2015).
As a result of that innocent little mistake, my team had trouble to adapt to the pace of other teams and the difference in pace within the team. I suspect that the abscense of Zuiverloon was the biggest problem for the team, as his workrate had lifted the team the previous season in situations where there was seemingly no success to be had. In held on to the 4-2-3-1 tactic I had succesfully used before. With Coutinho as goalkeeper, Supusepa as left-back, Beugelsdijk en Wormgoor as central defenders, Malone as a replacement for Zuiverloon on the right-back position, the defence had some problems at the start of the season. In central midfield, I had the captain Holla and Jansen by his side. On the left-wing, there was some rotation. First I tried Meijers, but he had a dip. Alberg didn’t perform as I had hoped, so in came Vukcevic. He disappointed as well, so it was back to Aaron Meijers.  The Central Attacking Midfielder (CAM) position was filled by Matthias Gehrt for the large part of the season, while the uncontested right winger was my Chelsea fledgling, Englishman Lewis Baker. He performed outstanding in the face of adversity, often placing great assists on Mike van Duinen’s head.

However, van Duinen got heavily injured half a season in. I had one trump up my sleeve: Romania Under 21’s Catalin Tira, a 19-year old striker. I had played him as a substitute a few times, but he rarely impressed me. However, when he got to play the full 90 minutes, he was great. Better than van Duinen. This resulted in a dilemma when van Duinen returned from injury. I had one solution. Baker replaced Gehrt as CAM, while van Duinen took the AMR position from Baker. This might have been one of the best decision’s i’ve made in this young career as a manager so far. Why? Well, this was the first game (against Vitesse, at the time second in the Eredivisie) using this line-up. 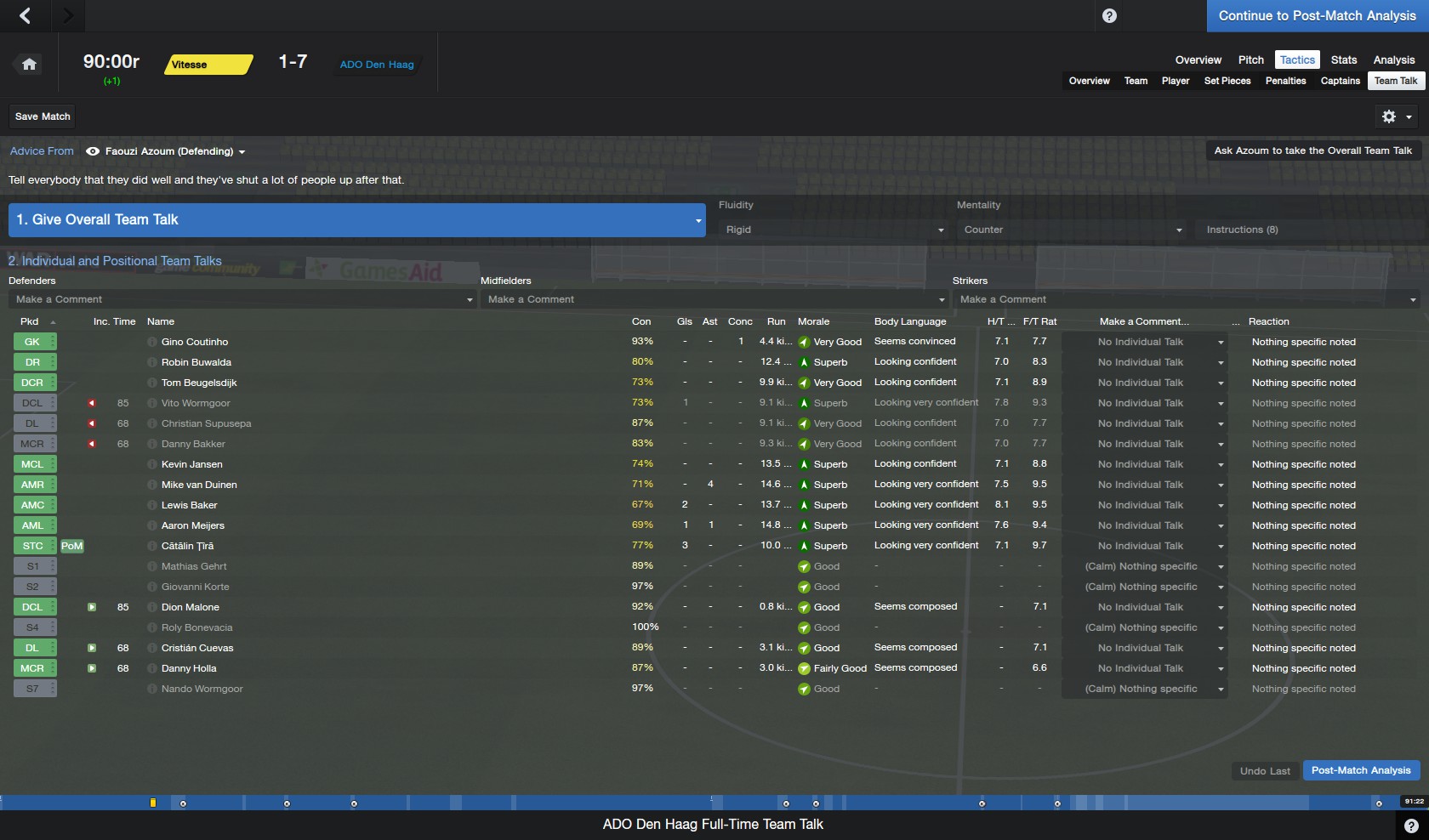 Yes. 1-7. And the one goal for Vitesse was even an unfortunate own goal by Beugelsdijk. We destroyed them. This became a turning point in the season, as from then on, we didn’t lose a game in about 8 matches. We climbed from 14th to 8th in the standings. At the final game of the season, we were 8th. I was at peace with that. However, after the final whistle blew, and we had won with a comfortable 3-0 againts NAC Breda, we had suddenly climbed to 6th. 6th! Can you imagine my joy after seeing this screen? 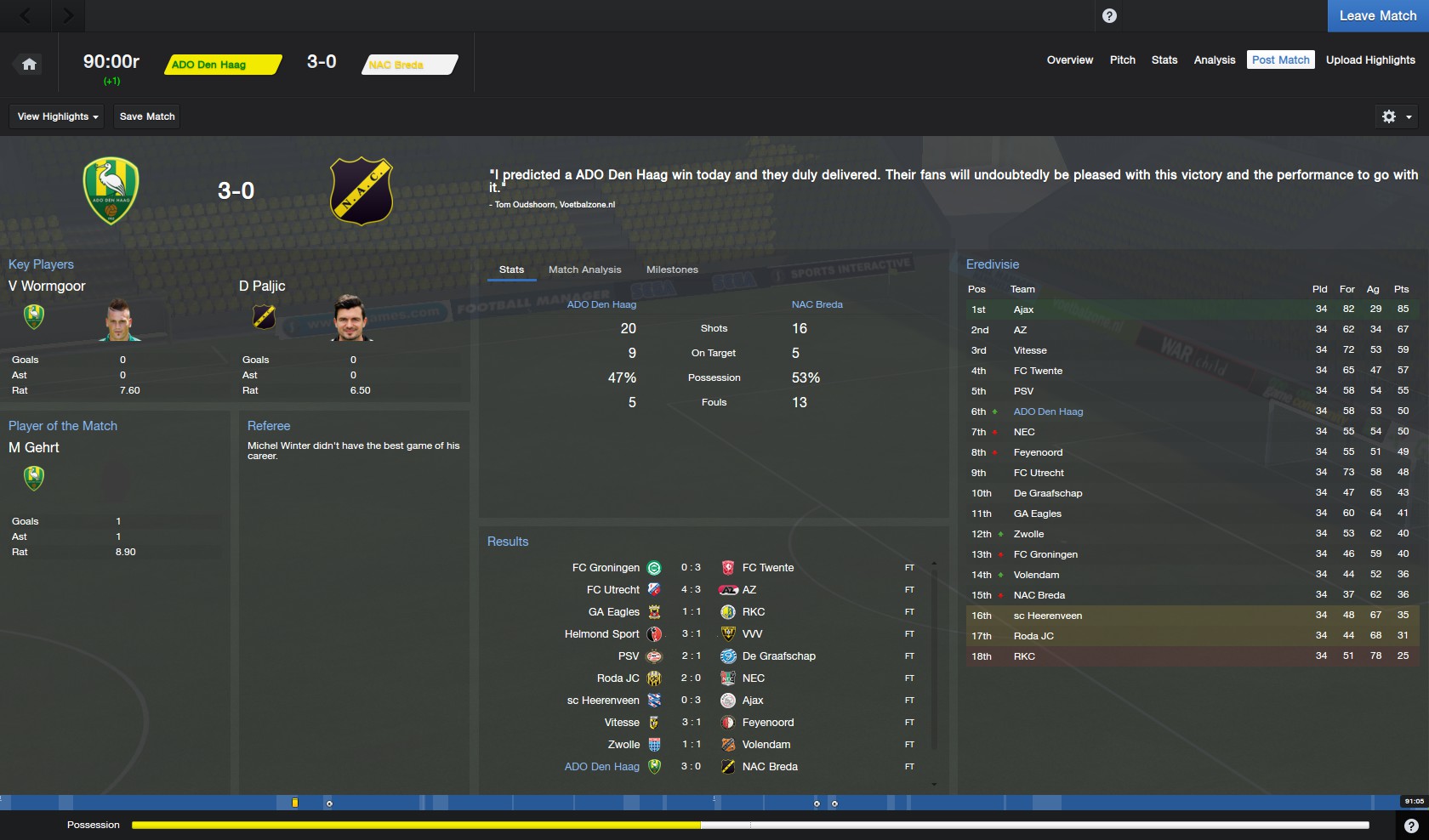 We got to play the playoffs for the one remaing EURO-league ticket. First NEC, which we brushed aside easily. Then came Feyenoord. We won at ‘de Kuip’ with 1-2, which was a great prospect for the second game. However sadly, we lost at home with 0-2. Still no European competition for us, but we don’t have to rush it. Here’s the full overview of the Eredivisie after 34 rounds, and our way to 6th. 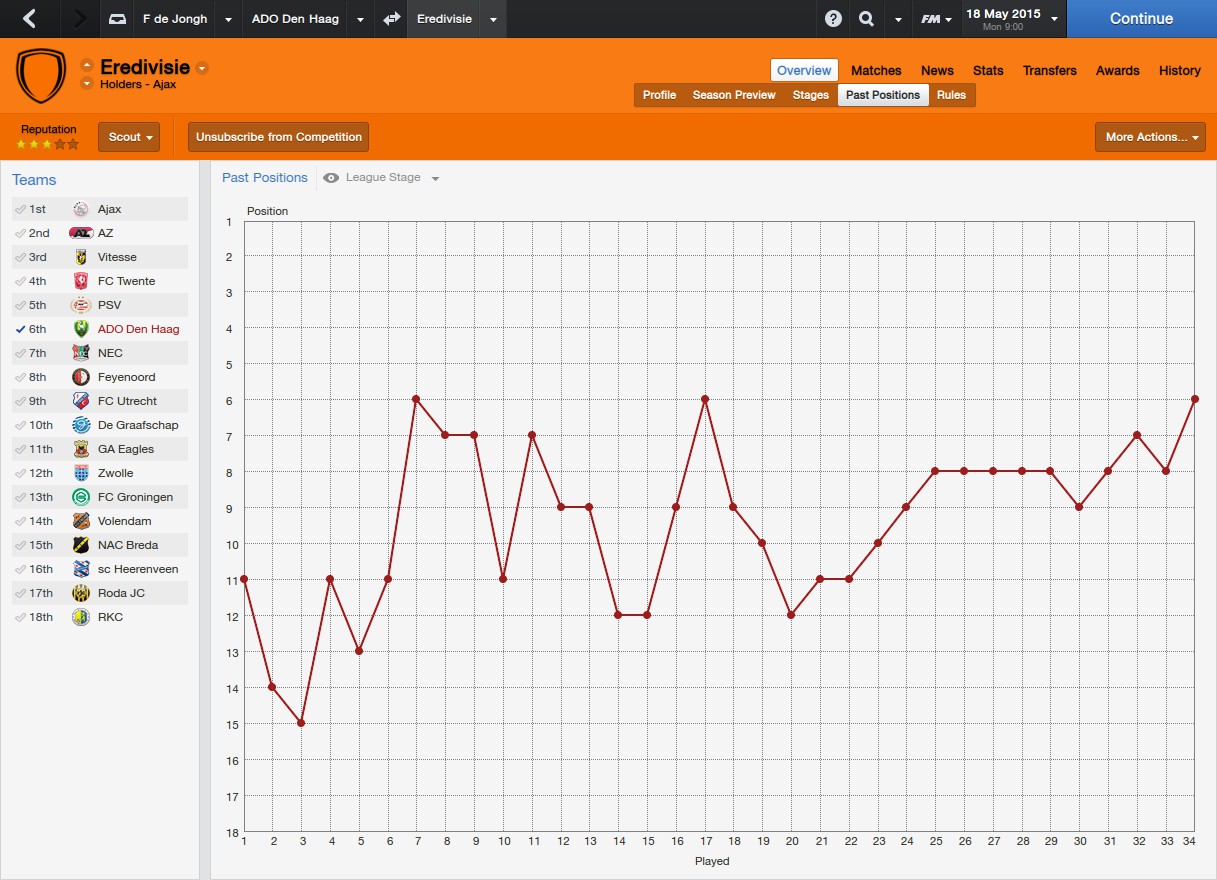 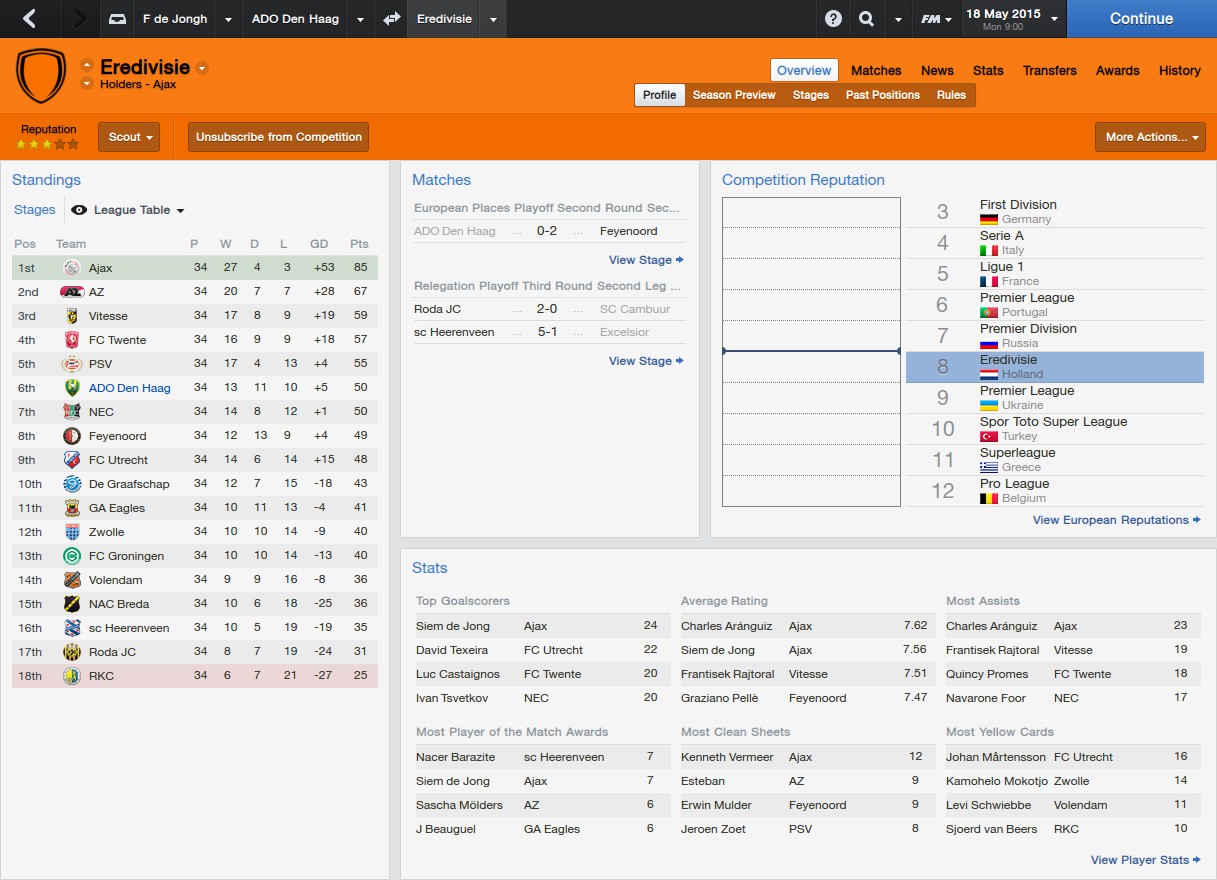 (for a baseline on their respective starting qualities, I advise you to look at the first post in this season, linked here) 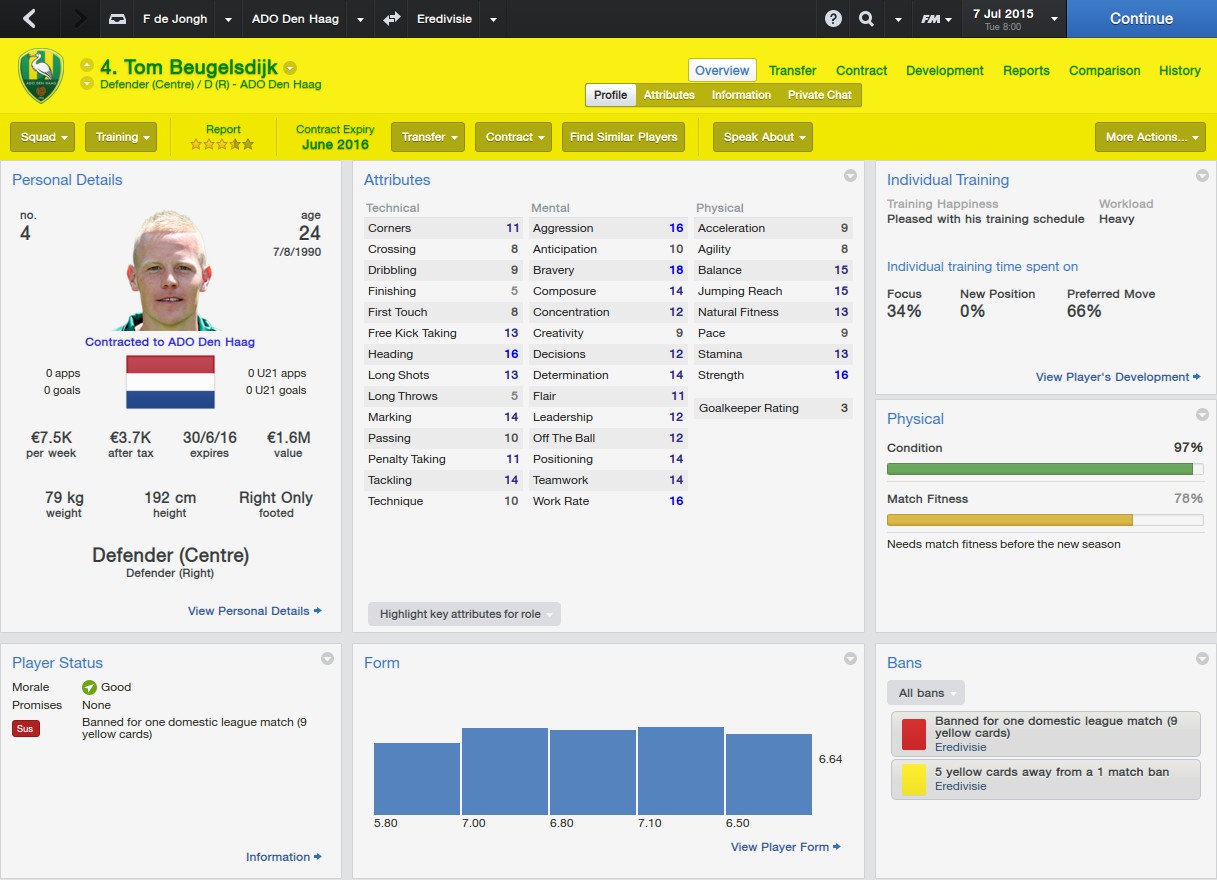 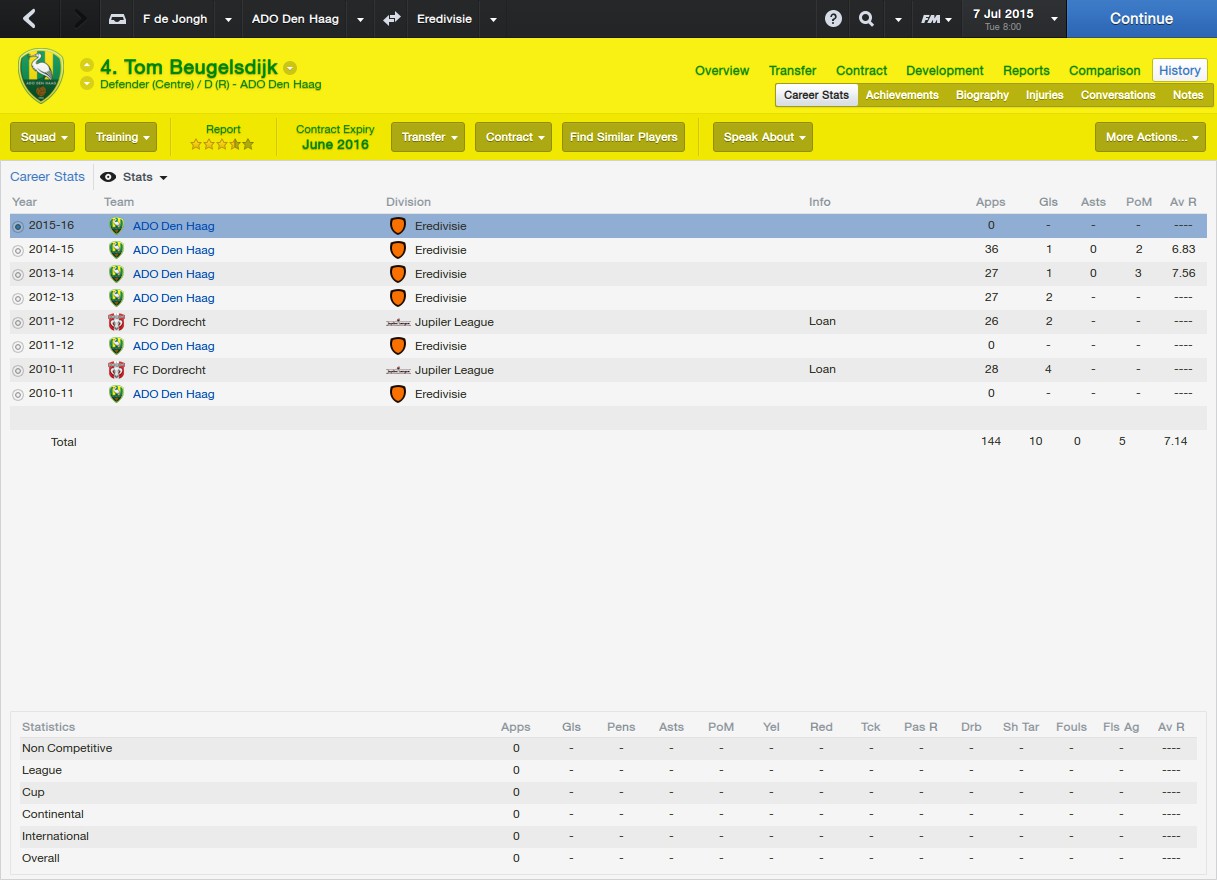 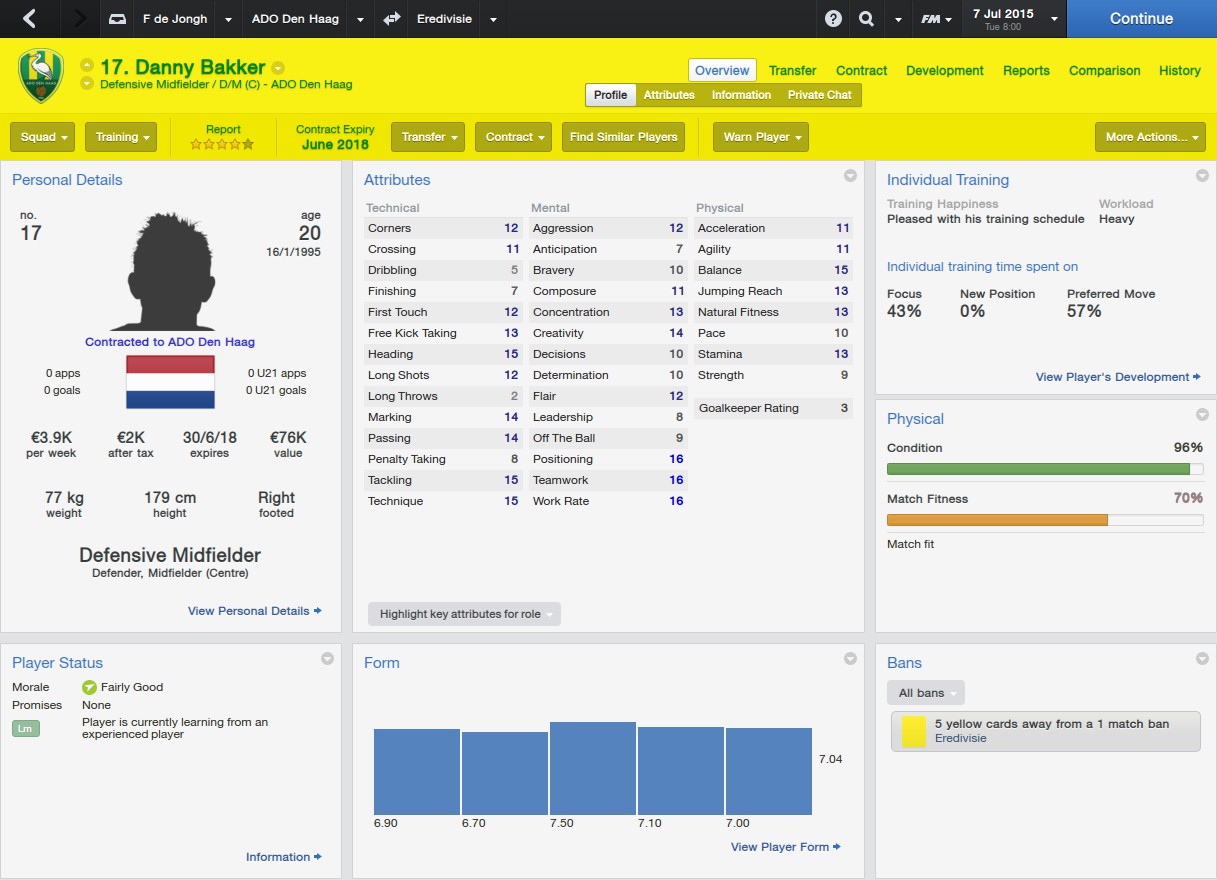 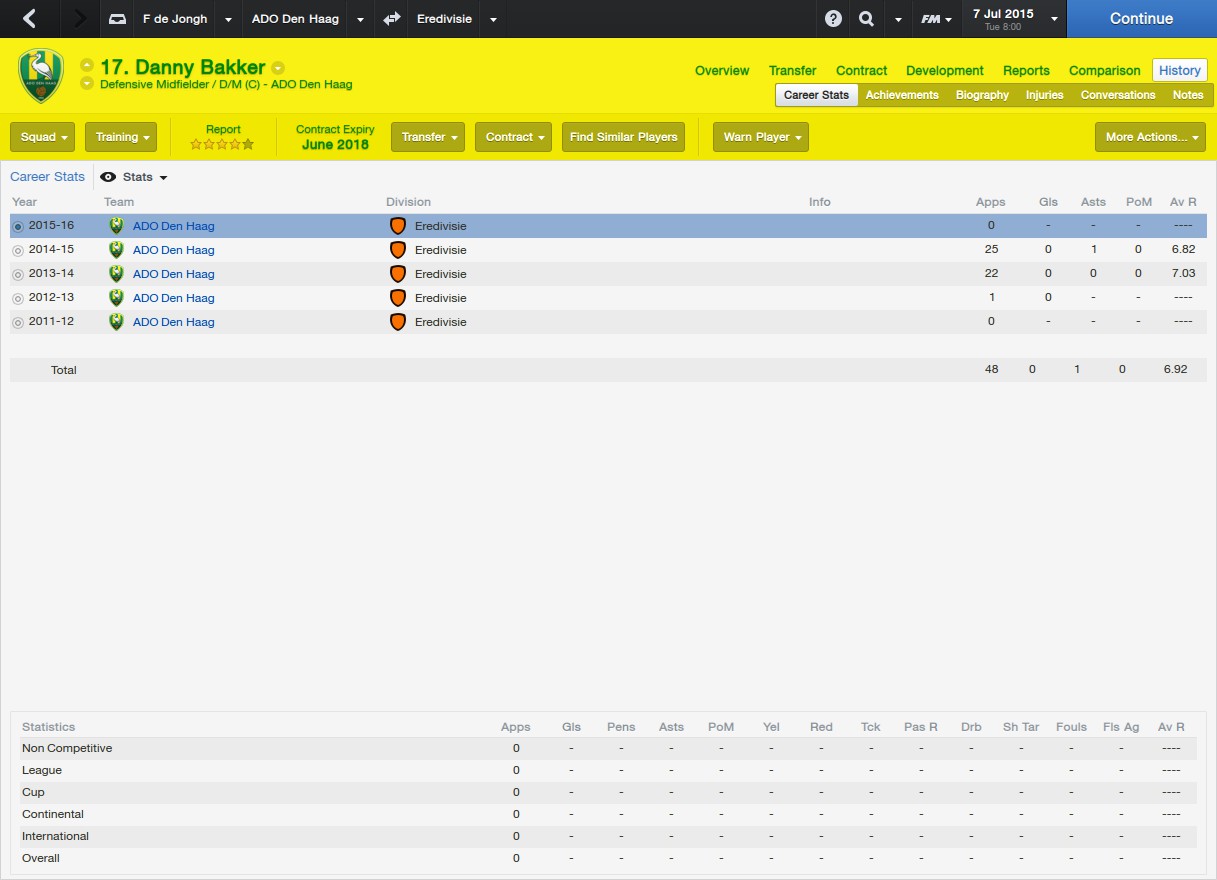 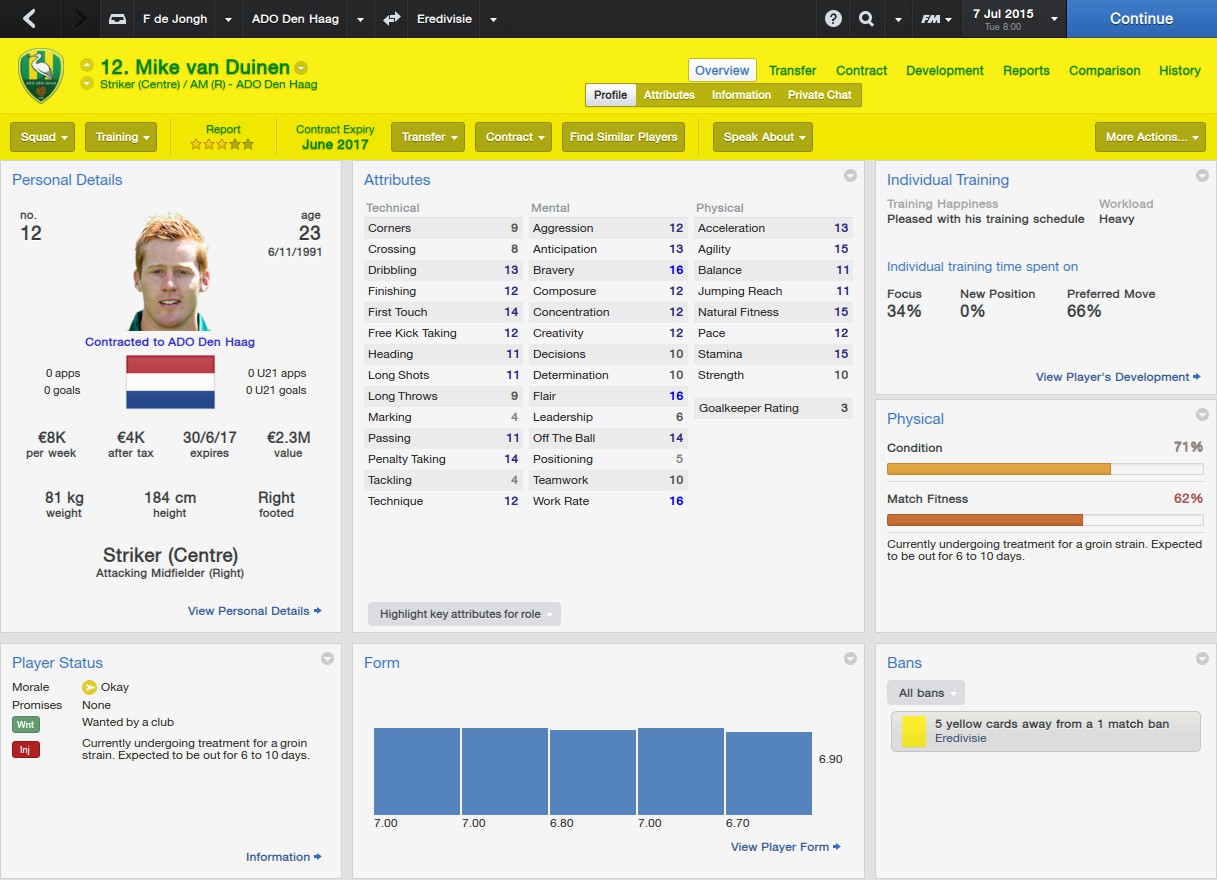 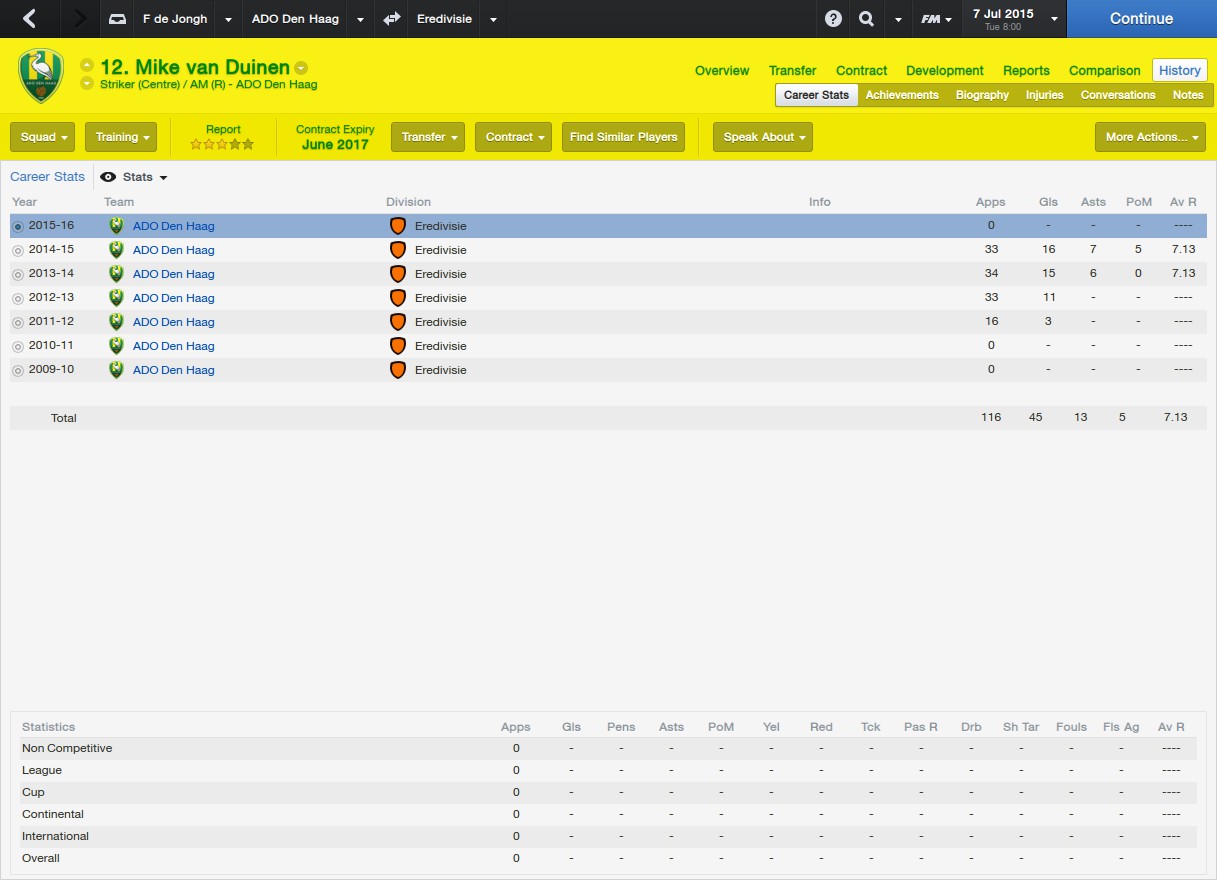 And introducing; this crazy re-gen I got. At age 15, he was already playing with Holland under 19’s team. Ladies and Gentleman; Bas Vos: 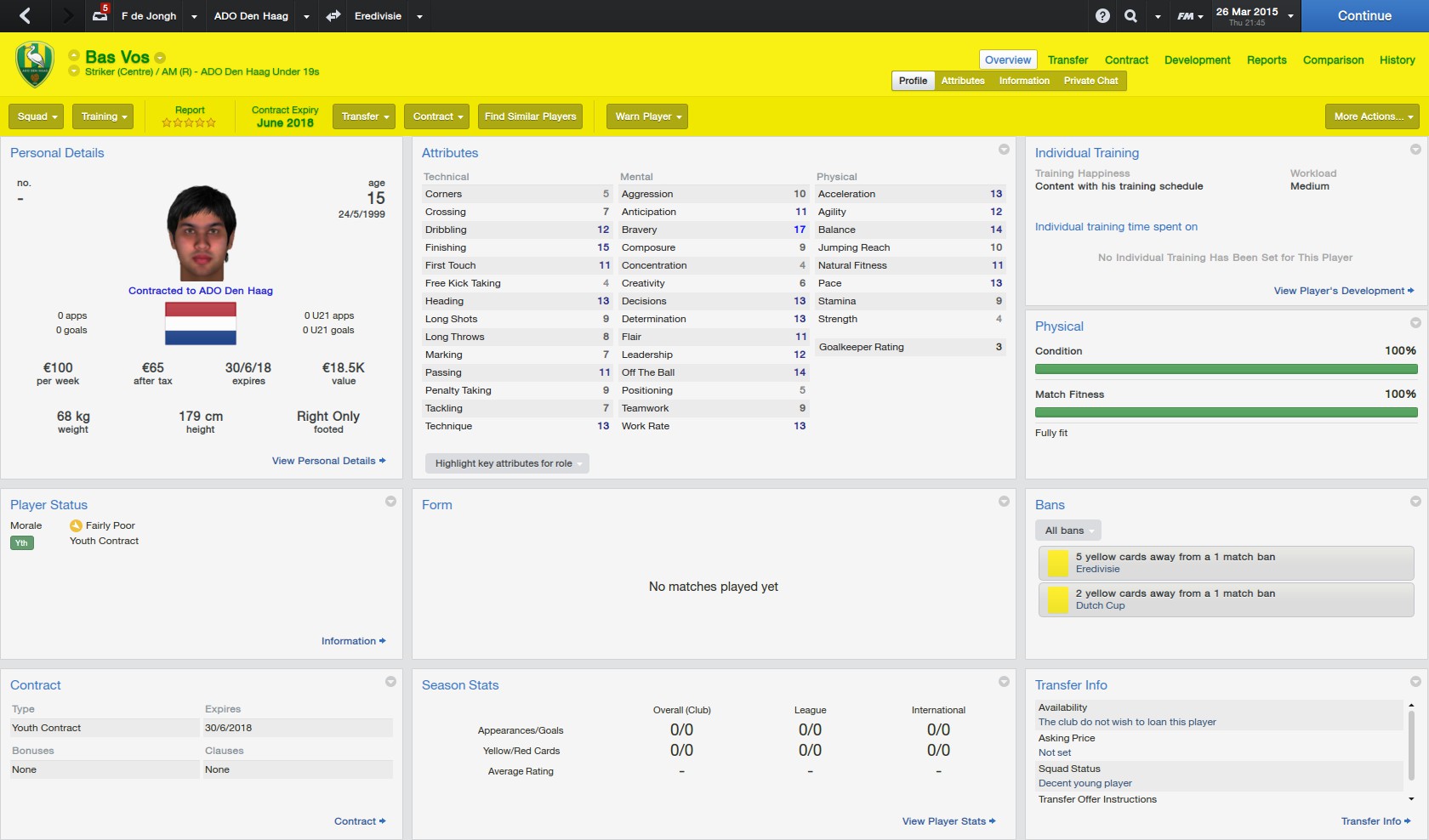 Looking at the stats, another amazing progress from Danny Bakker. Van Duinen and Beugelsdijk have also grown, but Bakker is going to be a star. Just like Vos, I will probably give him a few chances the next season to play some first team football, just to aid to his progress. Also, van Duinen had about 14 goals from 16 matches before he got injured, running for top goalscorer. Because I changed his position to AMR, he didn’t score as much anymore.

Here’s a full overview of the team directly after the season ended: 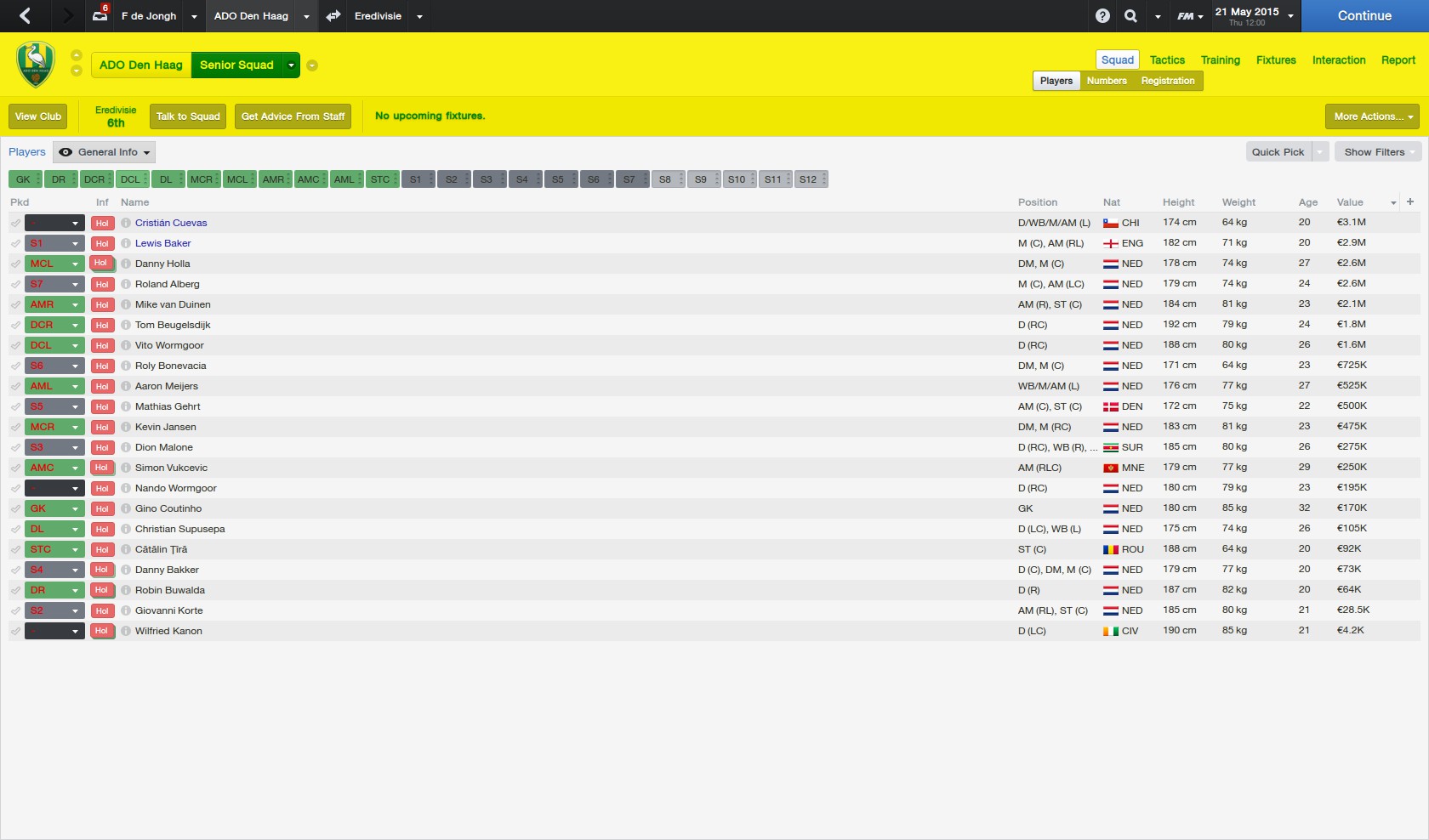 Club Finances
Because of our surplus on the transfermarket, we had a healthy season. Also thanks to my iron grip on the wage bill, we made a profit. We went from a negative 2 million € to a positive 4 million € on our bank account, as indicated by the below graph. Hopefully this will mean that I don’t get forced to sell players, and that we can start building the team slowly. I’ve already bought old fan-favourite Christiaan Kum from Heerenveen, to join us the coming season. Also Stijn Wuytens, Belgian midfielder and player of the year in the lower Jupiler League will join me on a free transfer. I will lose some non-essential persons, perhaps Vukcevic and Bonevacia, and start building our strength instead of depth. 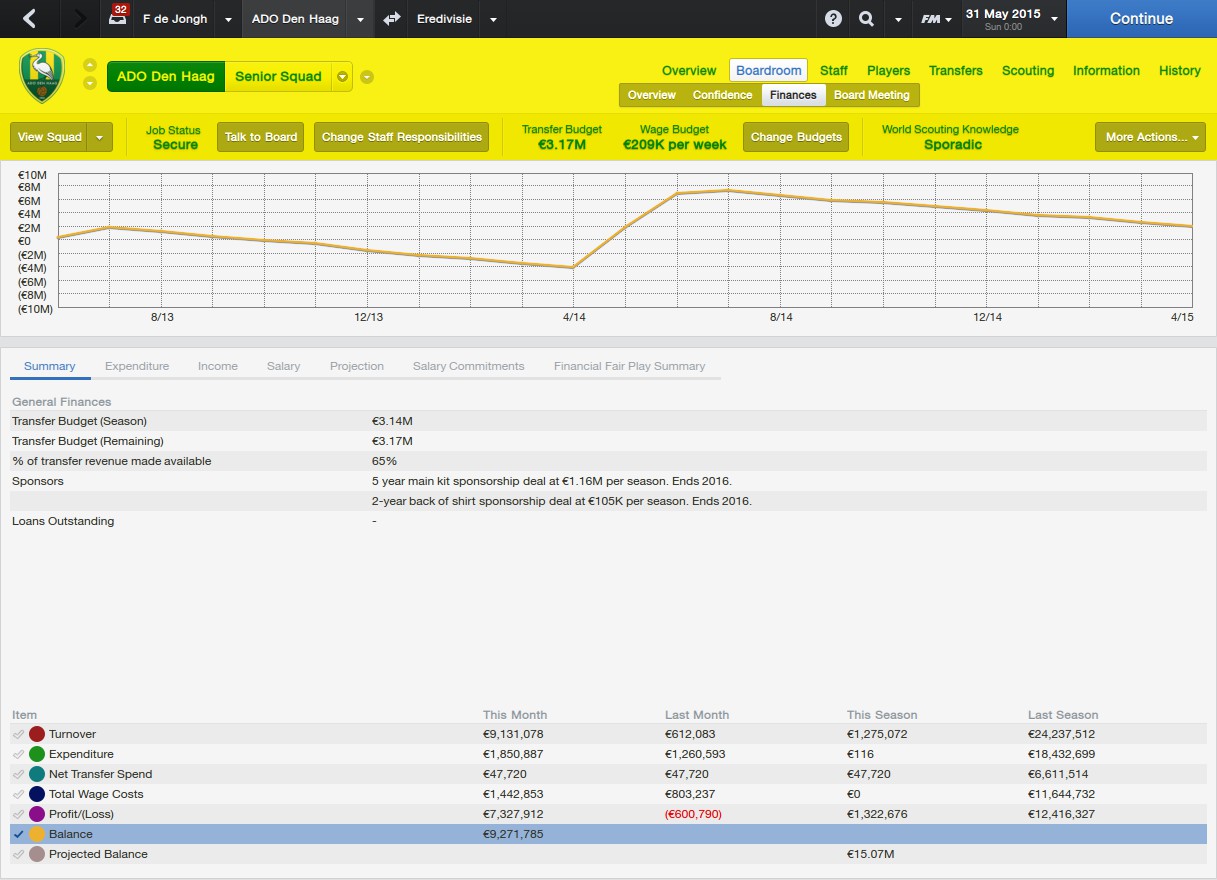 Conclusions and Predictions
Next season will be another tough one. We do have a certain amount of money, but I will still need to be smart with my purchases. I will also have to watch out for any clubs that want to steal my prized posessions away from me. Feyenoord has already bid 3.5 million on van Duinen, but I’m not willing to let him go. I will try and renew the loan for Baker, and I will probably be looking for an experienced CAM. Baker would move to the left, where he is equally skillful, and Meijers will take Supusepa’s spot in the defence. With Kum, I have a great substitute for any defensive position. I will however, need to find a place for Danny Bakker in the starting eleven. He’s equally a DC as an MC, so I can rotate him in midfield and defence. I hope we can go into Europe, but it will be a hard task. I’m affraid our 6th place was a fluke, and I will be battling for ~8th next season. Only time will tell.