In this weekly column, I will put a socio-political issue into perspective. This means that I will look at both points of view of the story rationally, and hopefully come to a compromise that both parties can agree to.

The Perceived Racism of an Innocent Holiday
For centuries, the Dutch have celebrated a holiday called ‘Sinterklaas’. Sinterklaas, or Saint Nicholas, is better known to the world as one of the precursors of the current image of Santa Claus. A catholic bishop, he arrives each year on a steamboat from Spain with his trusted servants, the ‘Zwarte Pieten’ (literally translated as ‘Black Pete’s’). Once he arrives, he get’s on his horse called ‘Amerigo’ and starts delivering presents to kids in the Netherlands and Belgium, with the big conclusion on December 5th, the night before his birthday, called ‘pakjesavond’ (‘present evening’). For some reason, the last couple of years the build-up to this holiday has been hampered by a lot of discussion regarding racism, a leftover from the historic roots of the holiday. Yesterday, Saint Nick arrived in Groningen, making the subject and the accompanying discussion, relevant again.

The Problem
What most people who call racism see as the core of the problem, are the image of Zwarte Piet, and his relationship to Saint Nick. Black Pete is traditionally dressed in a colourful ~17th century traditional servant suit, painted black with red lipstick, a wig consisting of black curls and accessorized with golden earrings. While Saint Nick rides his horse, the Black Pete’s walk beside him, holding the reins to his horse and doing comedic bits to entertain the kids. Some perceive this as an example of slavery, which, if you look at the roots of the tradition isn’t all that far-fetched. 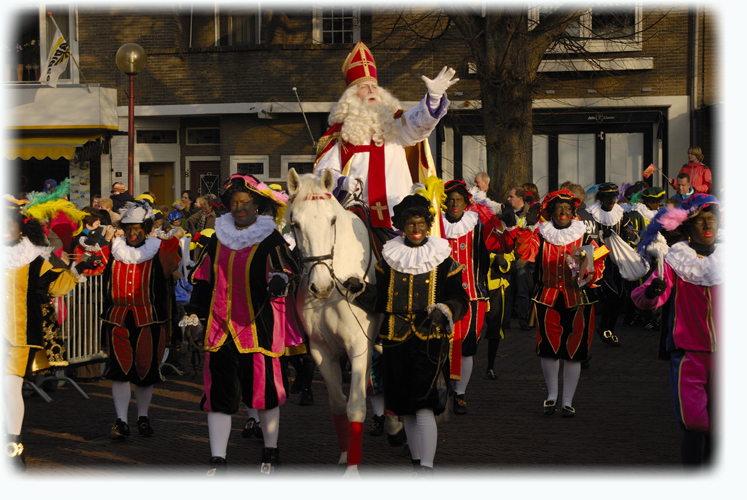 Saint Nick and his Black Pete’s

The story goes that Saint Nick is about 600 years old, a Turkish bishop living in Spain in a gigantic mansion. He’s supposed to be a very rich man, which is why he’s able to purchase all the presents for the kids. But what else would a rich man have in the 18th century? Most noblemen would express their wealth through the abundance of slaves. There would be a hierarchy of slaves, the one more important than the other and every slave would have another task, be it maintenance, administrative work or just plain cleaning. This is equivalent to the roles of the ‘Pieten’. There’s a ‘head-pete’, a ‘navigation-pete’, and many, many more.

The story that I (and millions of other kids in the Netherlands) learned was that the Zwarte Pieten became black because they entered houses through chimneys, and the ashes would form a permanent layer on the skin of the Pete’s. However, this is inconsistent with the red lipstick, curly wigs and golden earrings, which most resemble traditional blackface. As a kid, between the age of 3 and 10, you don’t question the story your parents feed you. You also have no idea what racism entails, and that the black pete’s are an extension to centuries of repression.

The Other Side of the Problem
The Dutch are a divided people. However, when you threaten our traditions, we become united as one. When the now Queen Maxima, in one of her first media appearances, stated that ‘the [one] Dutch identity doesn’t exist’, months of discussion followed. The same came about with this whole discussion about the do’s and don’ts of Sinterklaas. People feel threatened enough in these times of (relative) economic disparity, now some people want to take one of their only unique cultural traditions. Of course the backlash is great.

Often heard arguments are that the racist connotation has been lost with the years gone by, that the Black Pete’s are loved, that they are in no way slaves but merely assistants to an old and tired man. Lots of people also raise the point of ‘why now’? Why do some people only now realise that the celebration is racist? Nothing has changed the last few decades, so why do people only now object to the form of the celebration?

A Possible Solution?
There will always be people on the fringes of the issue who don’t want to compromise their position to come to a solution to the perceived problem. On the one side, people want to abolish the role of Black Pete entirely. Others don’t want to change the tradition at all, looking back with nostalgic goggles to their own experiences with Sinterklaas. They don’t want their kids to have a different experience to what they had as a kid.

The position of Black Pete seems to be untenable. Something has to change, or else it will be the same story every year: politicians, media and social justice warriors ruining the spirit of the celebration altogether. But how to erase the negative connotation of Black Pete without changing the tradition of the holiday?

The first variables to go would be the golden earrings and the red lipstick. The black make-up can be changed to better fit the chimney-story. Instead of all black, why not a few black smudges? Some people have advocated rainbow-colored Pieten, but how would you change the back story to fit their new appearance? They’ve walked through a rainbow? That’s just not believable to kids. The black curly wigs are also obsolete; why not have different styles of hair?

The last variable is the most difficult to change, in my opinion. They are the suits.  Apparently, these are traditional suits worn by slaves in the 17th and 18th century. Without changing the suits, you can’t lose the link with slavery. However, without the suits, Pete’s wouldn’t be recognizable. This should be changed gradually, for instance starting with removing the white collar, which is to some a form of slave collar. The rest of the clothes can slowly start to resemble a 17th or 18th century noblemen dress-up. A different hat, for instance.

I stress that the changes need to be made gradually. It is not easy to break traditions, thus I propose to ‘bend’ them. Fully eradicating Black Pete is impossible, but instead of calling him Black Pete, calling him just Piet or Pete would be a huge step.