Pokemon Go: Delving into the Statistics of Evolutions

Pokemon Go is taking the world by storm. I wrote an article about my first experiences with the game a few weeks ago. At the time, I was working on my master’s thesis, which was a quantitative content analysis. I performed that analysis with SPSS, a statistical program created by IBM. I used Pokemon Go to recharge the battery in between sessions, catching loads of pokemon. Mostly Weedles, Pidgeys and Rattata’s. Because I was in a statistical mood due to my thesis, I decided to keep track of evolutions, to see whether I could discover some statistical facts of the hidden mechanics of Pokemon evolution. Even though lots of databases have popped up,  such as Pogotoolkit, I still think my data has value. And here I am, to present my results to you.

First, some exploratory facts about the dataset. Of every evolution I did, I recorded the CP and HP before and after evolving, creating a dataset with 168 cases (n=168). A total of 27 different evolutions were recorded. By far the largest groups was Weedle > Kakuna evolutions, with 45 cases (26.8%). Pidgeys came second, with 38 (22.6%). 29 Rattata’s were evolved to Raticates (17.3%). Eight Staryu’s and Psyducks, and seven Goldeens were evolved. I guess it’s obvious: my city (Leiden) has lots of water (‘grachten‘), and the accompanying water Pokemon.

Analysis
So, what did I do exactly? I put all of the evolutions into a SPSS data file with the recorded variables. I calculated the evolution multiplier by dividing the CP post evolution by the CP pre-evolution, and did the same for HP numbers. I calculated a score of the Pokemon pre-evolution by dividing CP by HP pre- and post-evolution, and arrived at a ‘CP/HP’-score by dividing these score with each other. I know, this kinda sounds confusing, but I hope I can make things more clear after using the first results as an example. So, without much further ado, let’s get on with the first group.

Above is Weedle’s score chart. His average growth multiplier during evolution is ~1.08 for CP gain, and ~1.12 for HP. This is based on the aforementioned 45 cases. The standard deviation for CP gain is ~0.012, meaning that 68.2% of all evolutions will either be 0.012 lower or higher than 1.08. 95.8% of evolutions will be within two standard deviations of the mean, meaning that there’s nearly a 96% chance that the average gain of CP through evolution (for Weedle) will be at least 1.05564, and at most 1.10356. The other values, Min. and Max., are the minimum and maximum observed variables. The same can be calculated for HP, with the lower expected gain to be 1.08496, and the upper gain being 1.14804.

For the final part of this first analysis, we have Rattata (n = 29). Rattata gains ~2.60 CP from an evolution, and ~1.72 HP. His CH-score is ~1.51, meaning that the disparity between CP and HP gain through evolution is pretty high. Some people only look towards CP as a way of boasting to friends, but a Rattata of CP 830 will have very low HP (roughly 86, which you can calculate by taking the CP and dividing it by the CP/HP-post). While the 830 might look good, it does mean your Pokemon will die almost instantly during Gym battles.

Analysis 2: Staryu, Psyduck and Goldeen
I will run past these analyses really quickly, because you can take the conclusions made above and copy paste them below using the values in the tables. Because there is a smaller number of cases in the datasets, this data might not be completely finalized. However, it is pretty hard to get about 40 cases of Staryu evolutions, even for me.

Staryu gains an average of ~2.40 with its evolution to Starmie. Not too shabby. The HP gain, however, could be better. Starmie has pretty high damage, but is lacking in the defensive department.

If I were saying Starmie’s HP was bad, Golduck’s is dreadful. With a CH-score of 2.1177, Psyduck has one of the highest values I encountered. However, this could also be because Psyduck himself has relatively high HP, so he ends up with around the same HP as Starmie compared to its CP. All in all: Golduck is not a good gym-battler as well.

Goldeen’s CP-gain might not be the highest in the 50-candy 1x evolution tier, but this is compensated with a relatively high HP gain. Yes, Starmie’s HP gain is higher, but then again, Seaking’s is better relative to its CP.

Analysis Intermezzo: Data Comparison
Okay Felix, this is all fine and dandy, but we have Pogotoolkit. Why do we need this data? Well, lets test my data with what Pogotoolkit has to say. Inputting a Pokemon gives the variance in multiplier Pogotoolkit gives, which will be cross-referenced with my own data. See the table below for the results:

As you can see, numbers are generally the same. Any differences between the data can be described through differences in evolutions we observed. Their low value for Pidgey is remarkable though, as well as their high value of Rattata. It could be my data is skewed, but most evolutions have just .1 of variance (or lower), but those given by pogotoolkit have .2 of variance. It could be I haven’t experienced such values yet, but due to the amount of data (especially with Pidgey and Rattata) I have observed, this seems more like a fault in Pogotoolkit’s data. Oh, and don’t forget: Pogotoolkit only posts CP data, whereas I have at least some data for HP as well.

Analysis 3: all the rest.
The following results are those which still have multiple evolutions in the dataset, but not enough to have any statistical significance (between 2 and 6). Check below for the average CP and HP gains I encountered: 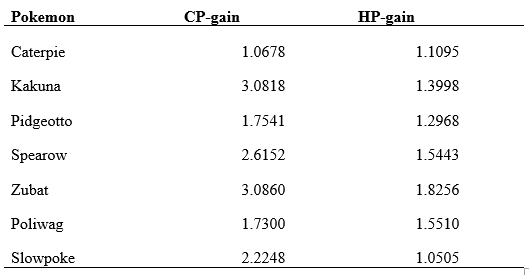 The following is a plot of all evolutions. This is just raw SPSS output, because fuck putting all of them in a table. I’ve been putting way too much effort into this post as it is. Also, 104 is supposed to be Cubone, forgot to label that data. And no, Magikarp isn’t a fault in the data. It really is that strong (CP-gain is 11.53, HP gain is 4.59). 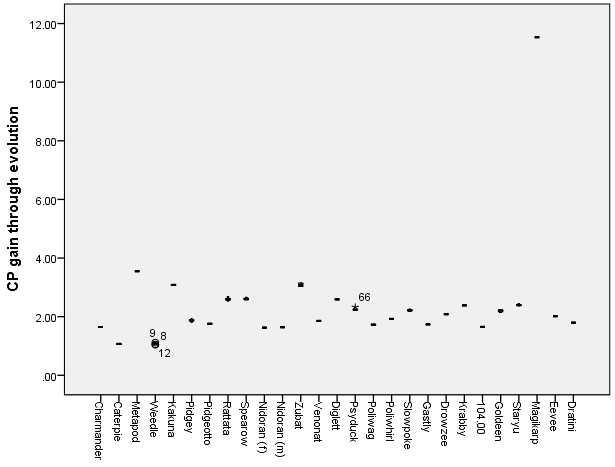 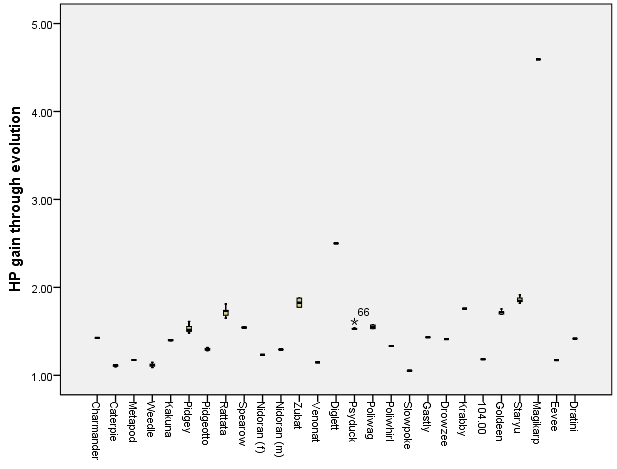 Well, that’s it. Please let me know what you think of it in the comments. I’ll be going to Italy tomorrow, and with high roaming costs, I don’t think I will be able to add a lot to the data. If you want to take my dataset and add your own evolutions to the list, feel free to download my dataset from here. You do need SPSS to open and edit the file though.