How Reddit made my wish come true: being a Graphic Designer.

I woke up yesterday feeling creative, wanting to draw something. When I created my template for the 2017 Formula 1 car and uploaded it to reddit’s /r/formula1 subreddit about one and a half months ago, people over there suggested I try my hand at Adobe Illustrator. Well, yesterday morning I thought “hell, lets give it a try”, so I installed an older version of Illustrator (CS6) and looked up a video through google on how to draw in this particular program, giving me this tutorial. I decided I wanted to draw a Formula 1 car, and chose this picture of the 1990 Ferrari 641 (driven at the time by Alain Prost and Nigel Mansell) as a base image for its elegance and simplicity of design, and got to work.

I used my old Wacom Bamboo One which had been lying dormant in my closet for a couple of years, unused. The pen had all of this sticky gunk on it, which is apparently a much heard design flaw caused by a reaction of the plastic to air humidity. I cleaned off the gunk, and started scribbling in Illustrator. At first, progress was slow, as I had no idea what I was doing. Progress was not helped by my Wacom’s driver utility crashing every 15 or so minutes, prompting me to restart the driver and having to close and open Illustrator every time this happened to regain full functionality.

After a couple of hours, I was satisfied with the final product (as pictured above) as a first forray into using Adobe Illustrator, and I posted it to /r/Formula1. After just a couple of minutes, I already had about five upvotes. Being a frequent poster on this subreddit (I acknowledge I might even spam my blog there a bit too much, especially while writing the post-test recap and analyses, but people seem to enjoy them nonetheless), I knew that this would be a popular submission.

I wasn’t prepared for the amount of popularity of the post though. The drawing, of which I thought was just a decent scribble, was on top of the subreddit after a couple of hours. Apparently, the style of my drawing hit a particular snare people enjoyed. The wheels aren’t particularly round, the lines aren’t particularly straight, and the coloring is wonky at best. But, people liked it, and it felt awesome. I don’t give a crap about the karma it received, but it just felt good to know that people enjoyed something I created with my own hands.

If I wasn’t prepared for the amount of popularity it gained, I was certainly unprepared for what came next, though.

A lot of people replied to this comment and it became so highly upvoted, I decided to take the gamble and ask my fellow reddittor’s how to make this happen. Some were quick to point out RedBubble as a good place to set up shop, so I obliged. I registered with their website, set up my account info, and added the design, thinking it would ultimately result in nothing anyway. In Dutch, we have a saying: “Baat het niet, dan schaadt het niet“, which boils down to ‘it doesn’t hurt to try’.

some examples of my design on a shirt, courtesy of RedBubble

You see, I’ve become quite pessimistic over the past couple of months. Since losing my job late October, I have been desperately trying to find a job befitting my expertise (the “PSA: FOR HIRE” link in the sidebar is a direct result of that). Especially since New Year’s, I’ve been getting out of bed early to go to the library. Not to read, but to fully concentrate on sending job applications. Apart from one temporary, minor gig, I did not get a stable job. Out of the 50+ applications sent, I think I got about twenty formal (generic) rejections, two (failed) job interviews, and the rest went without any reply from the employer. I was starting to lose hope, and this was also why I started drawing yesterday morning – because I was getting sick of sending job applications which would not amount to anything anyway.

After an hour or so, I got an email from RedBubble: 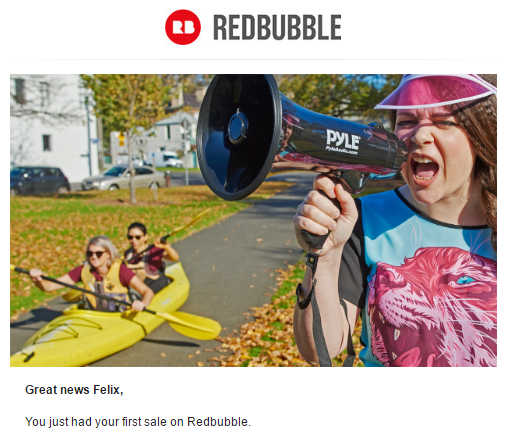 Someone had just bought something I created.

I had to let that sink in for a moment.

Someone had just bought something I created.

I don’t think I’ve been that happy since I got an email stating my Master’s Thesis had been approved, and that I completed my Master’s. I quickly found out it was a user by the name of ‘asparagusface’ who had been the first to pull the trigger on purchasing a t-shirt. An hour later, my second sale dropped. And a third. As of right now, I have sold six shirts.

Now, that doesn’t mean I’m immediately rich as fuck, but in regard to my current job status, it is a welcome amount of pocket-money meaning I can do groceries for a few days. But that is not the most important part. The most important part is the amount of boost it gave to my morale. I am happy as fuck right now. Literally (not literally) over the moon.

I just had to write this piece in order to properly thank everyone. The ones who gave a simple upvote to the post. Bushi87 for writing that particular comment. The people who upvoted /u/Buschi87’s comment. The people who pointed me in the direction of RedBubble. And most of all, the (at the time of writing) six people (especially you, asparagusface, as you were my first) who bought my design on a shirt.

I also want to thank the mods on /r/Formula1, after a little back-and-forth messaging, my design is also featured in the header of the subreddit – sporting an antenna like reddit’s Snoo mascot.

I was in a dark place yesterday. But as the sun literally went down, it began to shine figuratively – and I have one hell of an awesome community to thank for that!

If you like the design and want to view/purchase it, you can click the links below. I don’t want to be pushy about selling my stuff, but if you made it this far down, you were probably looking for it. I also added some personal favorites I think work really well.

Edit: I just uploaded a version specific for my friends over at /r/Formula1, which is slightly different in that it has a white helmet, and white antenna (as per reddit’s mascot, Snoo).

As an extra, I added an older design and made it to look good on a t-shirt based on this post from two months ago. Links pertaining to that design follow below, but first, a preview;

If you really want to support me, I have one product that I have increased the mark-up I receive by a factor of 5. Listen, this is way overpriced and you shouldn’t buy it. Really. But, if you want to throw my face against a wall, or let loose on a loud fart, you can do it with this throw pillow, as pictured below!

If you want to support my endeavours but don’t want to buy unneccessary rubbish, there are other ways to support me. Upvote my threads on reddit, follow me on twitter or facebook, and whitelisting this blog from your adblock.