This post will detail the goings-on at the Circuit de Montmelo for the first day of the second week of testing, taking place on March 7th, 2017. If you want to know more detail about these pre-season tests, or want to know the importance of it, feel free to read this post first. For the recap and analysis of week 1, as well as the predictions I made for this second week, you can click here.

9:00: Palmer is the one to kick off this second week of testing, followed by Vettel and the returning Pascal Wehrlein, who had to sit out the first week due to a back injury received from his crash during the Race of Champions in January. Within seven minutes, all ten cars have made an appearance on track. Hamilton is the first to post a lap (1:32.216) but starts to chew off big chunks in consequent laps. He hands the baton to Vettel, who sets four consecutive fastest laps, culminating in a 1:22.422. Twenty minutes later, it is Vettel who improves on his own time with a 1:22.235, strangely enough on unmarked tires, which he continues to use to improve to a 1:21.912.

10:00: Ricciardo puts his foot down in the Red Bull, taking the top spot with a 1:20.964, already faster than Red Bull’s fastest time of the first week (1:21.153). Others, like Massa, fail to improve on Ricciardo’s time for now. Wehrlein is the only one not having set a time with 100 minutes down on the clock, continuously doing out- and inlaps, probably testing his back more than his car. Hamilton goes second with a 1:21.080, just under three tenths slower than the Red Bull. 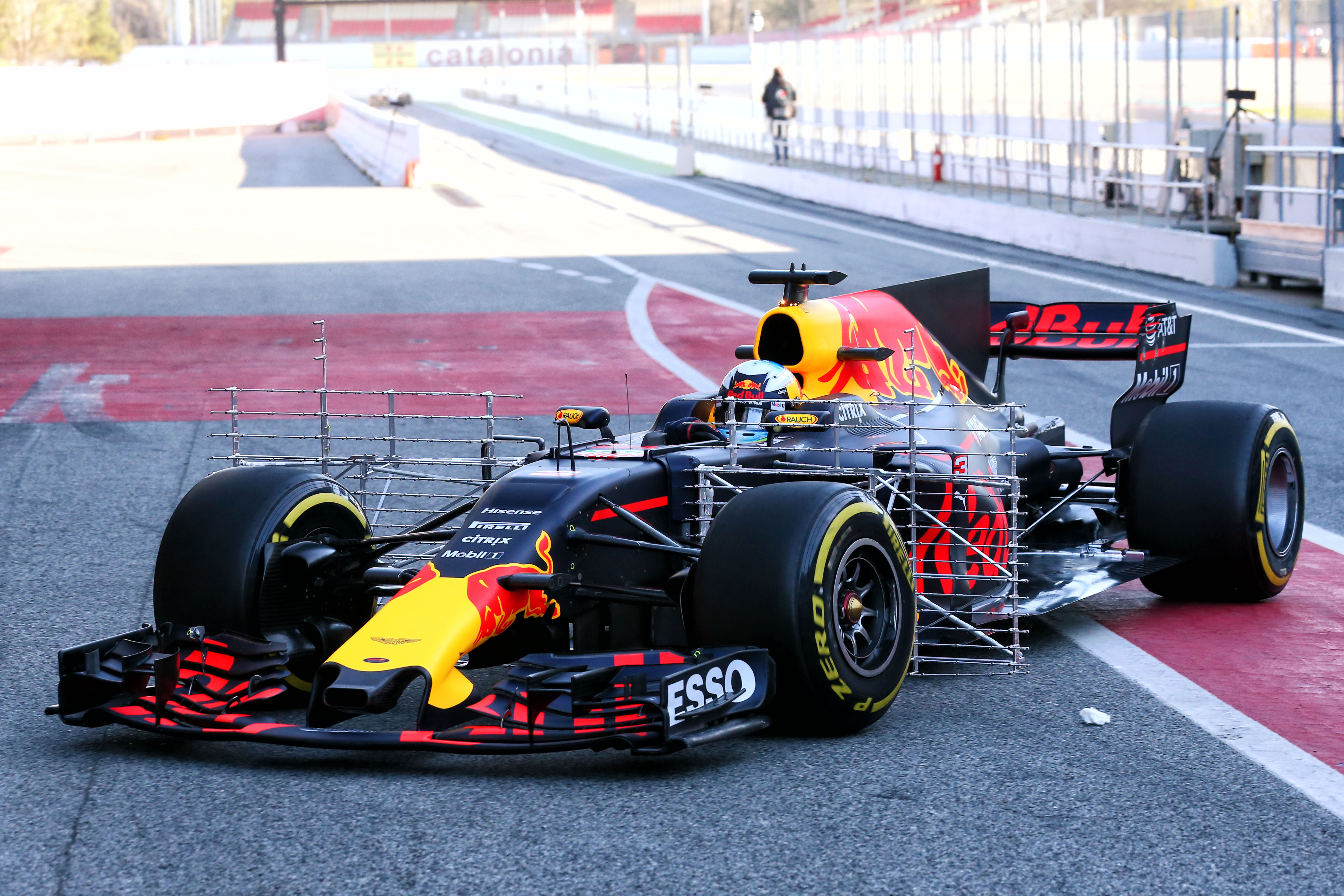 11:00: An hour later, Ricciardo once again shows he has a heavy right foot by improving on his own time by nearly a second as the timer stops at 1:20.106 once he crosses start/finish. Ten minutes later, and Ricciardo shows that the gloves are off at Red Bull: 1:20.077 (on softs), about .4s slower than the fastest time driven last week (on ultra softs). Meanwhile, Massa shows that in his hands the Williams is more than capable of keeping up with the Red Bull – his time is a 1:20.084, .007s down on Ricciardo. On the other side of the lap time chart, Wehrlein is gradually improving his times, showing his back can handle the G’s.

12:00: Renault seem to have run into problems, as they haven’t been out for a while since Palmer coasted the car into the pitbox a couple of hours earlier. Wehrlein keeps improving on his times. but he is still in the 1:25s. Ricciardo attempts a run on the ultra soft tire and is four tenths quicker in the first section, only to coast toward start/finish posting a lap time one tenth slower than his currently faster time. Massa, on super softs, does no such thing, setting a time of 1:19.726, just .021s down on last week’s fastest lap. As the morning session comes to a close, Ricciardo is the last to improve, setting a 1:19.900 on ultra softs.

14:00: For about thirty minutes, Ocon is the only one to head out onto the track. 31 minutes into the afternoon session, it is Vettel who joins him, immediately improving his own time to a 1:20.387 on softs. Bottas once again took over for Hamilton for the second part of the day, something they have done from day 1. Today, however, Sauber and Renault follow Mercedes’ example, but in Sauber’s case it must be to remain careful of Wehrlein’s back as Ericsson takes his seat.

15:00: McLaren have not been located yet this afternoon, which is explained when they state their power unit change will take a couple of hours. You’d reckon the mechanics would be able to change the Honda engine within 30 minutes by now. Vettel is the third driver to dive under the 1:20s today, with a 1:19.986 on the board ran on (surprise) softs. By 15:42, he is the first to drive 100 laps today. Meanwhile in the McLaren pitbox, they seem to confirm my suspicion, as Vandoorne leaves the garage (yes, with his car, not on foot). 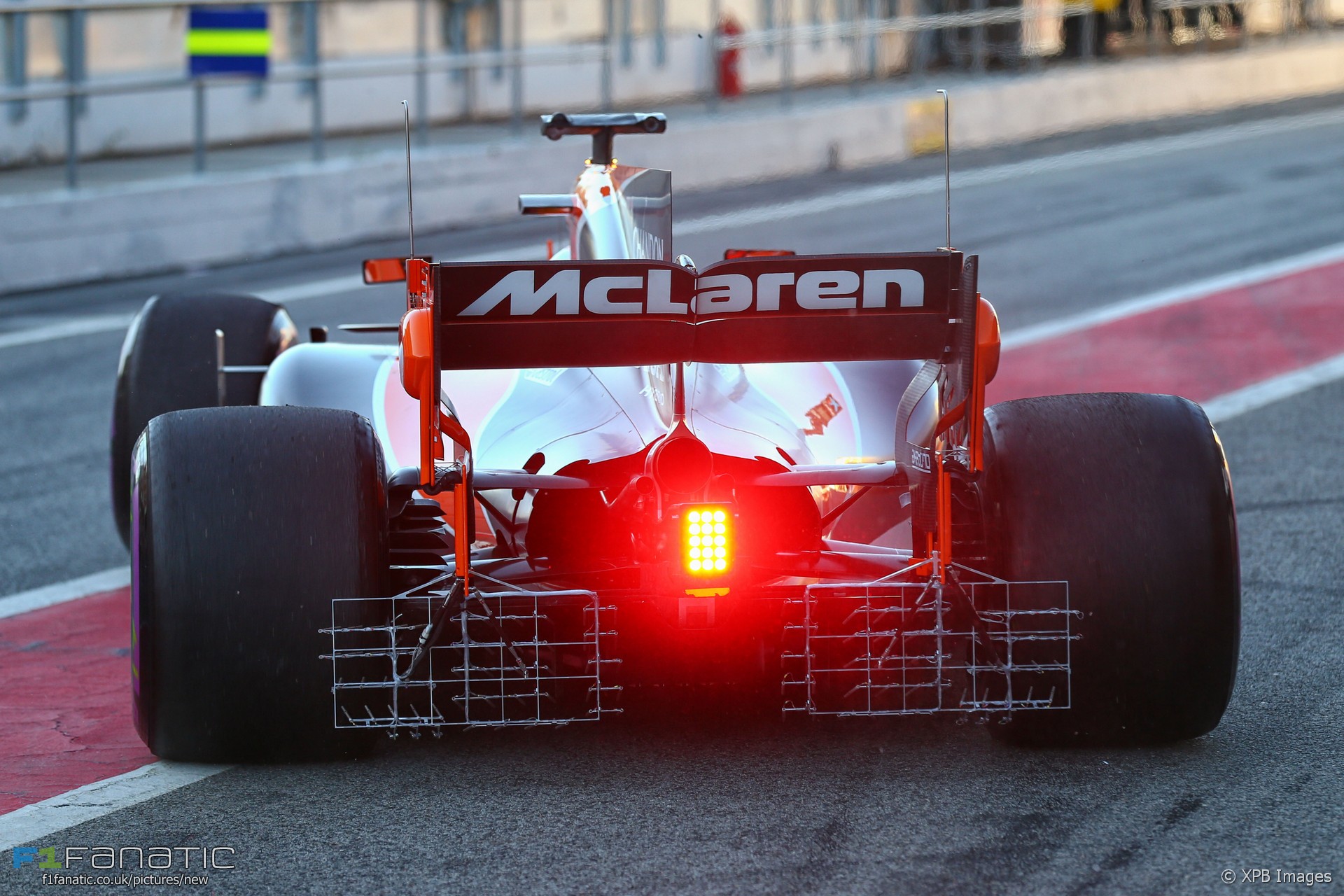 16:00: It had been a while since we saw a change on the boards when Vettel sets a 1:19.906 on softs, inching his way towards Massa’s time. Massa on the other hand, is the second to rack up 100 laps today. Vandoorne exits the pit again, looking to add some much-needed mileage to his McLaren. While Ocon also records his 100th lap, Vettel and Massa are already at 131 and 133 respectively. Williams is gaining ground after they had such terrible luck with Stroll behind the wheel last week, missing out on day 2 and the entirety of day 4.

17:00: Massa is already on his 142nd lap, well over two races distances. While the track is starting to get filled with other drivers, Massa continues to put in laps, reaching 155 with half an hour to go. Vettel is on 147, Ocon has 123 to his name. Vandoorne, with his freshly fitted engine, also nears full race distance. Twenty minutes later, Vettel catches up to Massa, both having driven 163 laps. As they enter into the final minutes of the session, Hulkenberg stops on track causing a red flag and ending the session just a minute before the checkered flag would have dropped, leaving Massa and Vettel both on 168 laps, or 2.55 race distances. 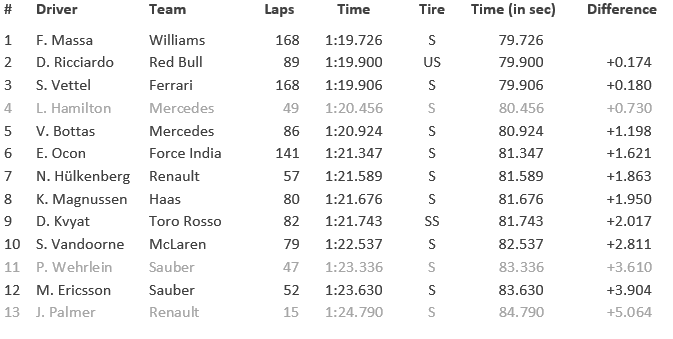 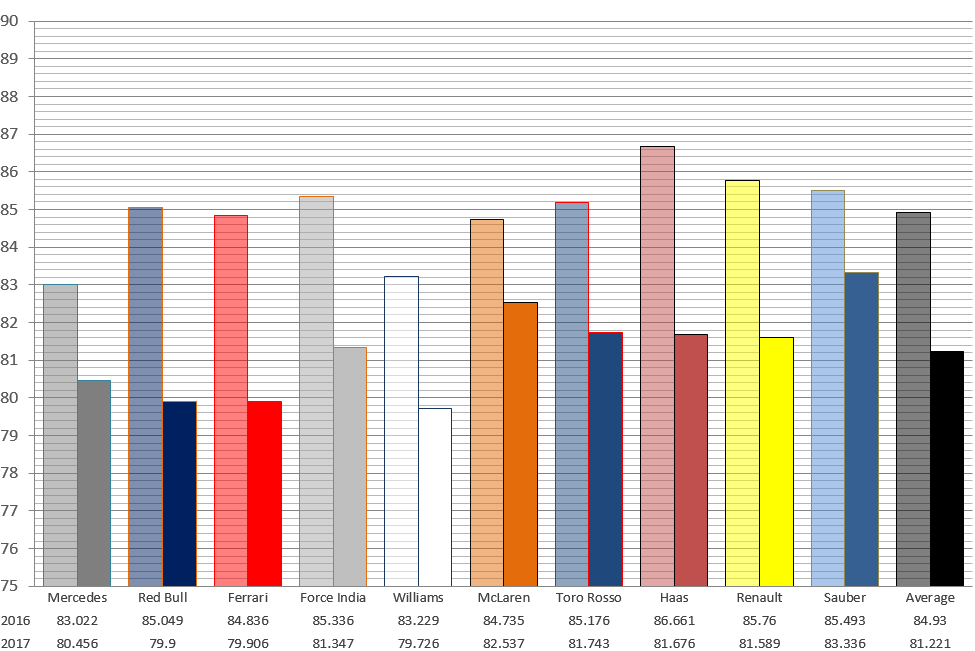 As I predicted in my preview to week 2 of testing:

I expect Williams to make a strong comeback, possibly setting some fastest times on the boards while Ferrari and Mercedes are not pushing their limits.

Williams have surely delivered, setting the fastest time today. Last year, Mercedes beat them to it by .207 of a second, but today they were nearly two tenths clear of their nearest competitor. The second part of the predictions rings true as well, though. Mercedes held back, and I believe Ferrari to be able to go faster, as they still haven’t touched the super soft or ultra soft. Red Bull showed they have the pace today as well, Ricciardo backed off when he set the fastest sector time in sector one.

Day 5 marks another troublesome day for McLaren. Eventually, they got in some much-needed laps, but nowhere near enough to catch up to the rest. Having had to switch their engine, they need nothing short of a miracle to bring both cars to the finish line come Melbourne. Toro Rosso, Force India and Haas had decent days, while Renault did have a mechanical failure which kept Palmer on the sidelines for much of the morning session. Sauber seemed to focus on long runs today, and at testing Wehrlein’s back problems, as they were far removed from the mid field today. 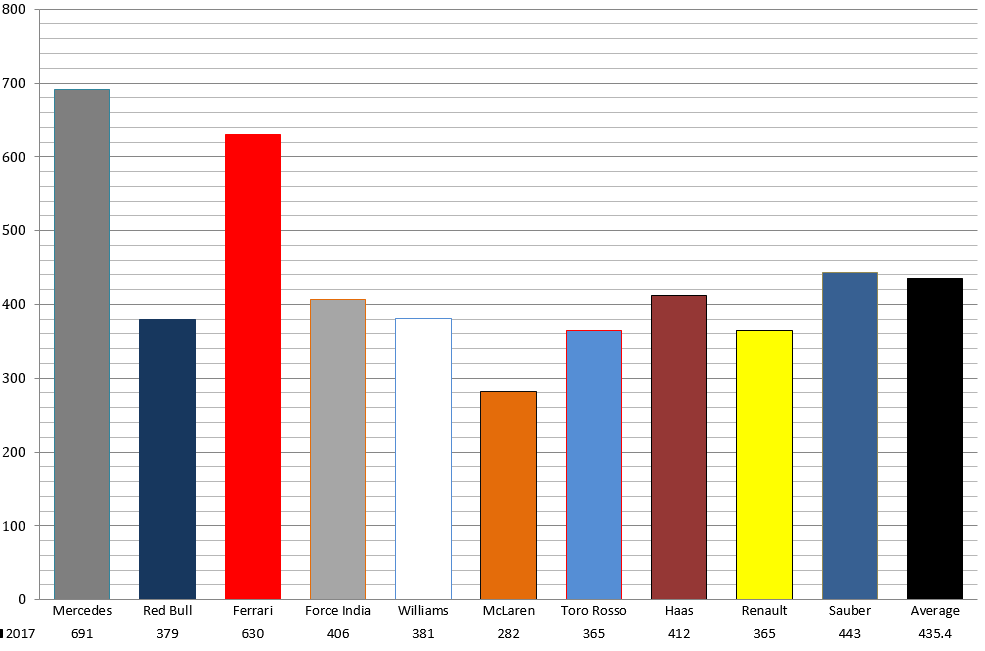 In terms of laps driven, Mercedes is still ahead but Ferrari is inching closer thanks to the mammoth effort by Vettel today. Mercedes took a more relaxed approaching today, giving Ferrari the opportunity they so happily took. Massa shows why he is needed at Williams, putting in the same 168 laps as Vettel nearly doubling the laps Williams had ahead of day 5. Force India showed they too have a reliable car. 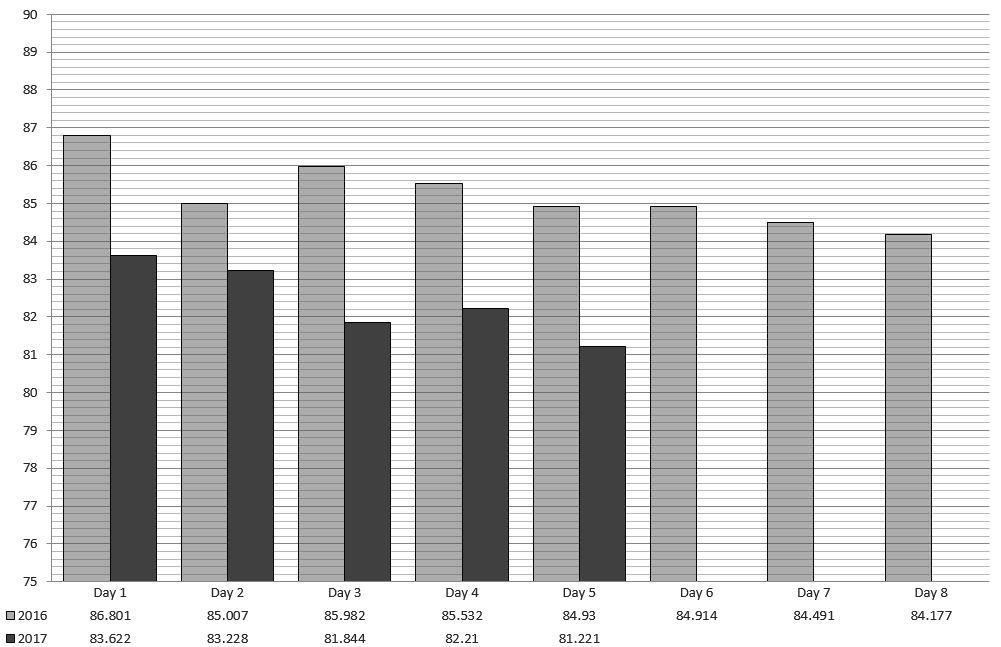 Today was the fastest day by .6s, defeating day 3. However, as the bars show us, last year they continued to drop right up until day 8 of testing, which I predict will again be the fastest day this year. This means a lot of fireworks is still to come!

Sorry for this being somewhat shorter than my usual analysis, as I have been a bit pre-occupied today. I hope it does contribute in any way to your enjoyment of the coverage regarding the tests. If you’d like to support me writing this blog, why not share it on facebook or twitter, or consider whitelisting me from your adblock! See you tomorrow!