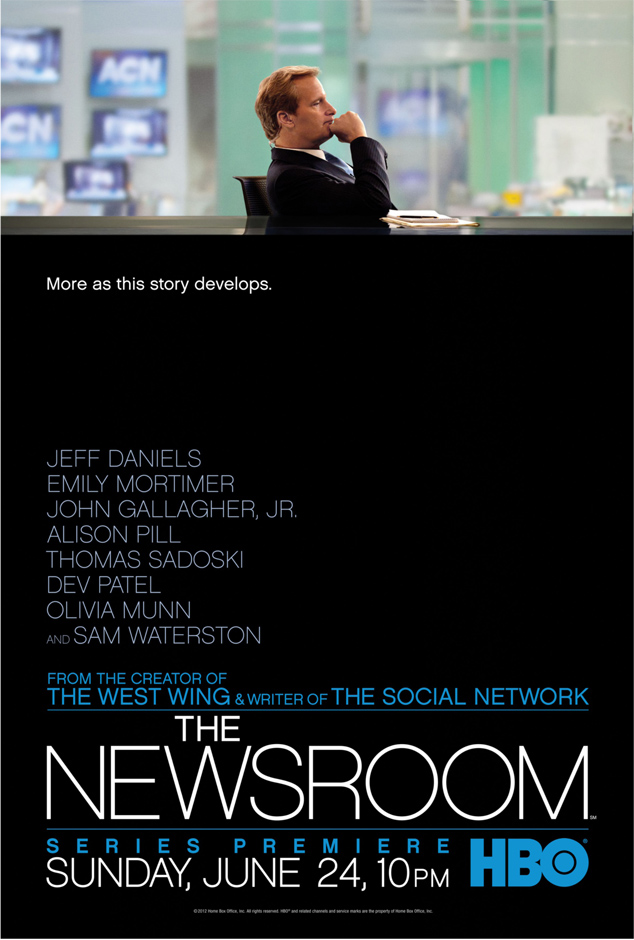 I’ve awaited ‘The Newsroom’, HBO’s new drama series from the mind of Aaron Sorkin, for a long time. I even wrote a preview for it nearly two months ago. After much waiting, the first episode premiered yesterday, so I could watch it today. Which I did. I’ll post my experiences while watching the first episode below.

‘The Newsroom’ starts out with Will McAvoy (Jeff Daniels) being questioned during a college tour. He tries to remain neutral on political topics, but when the speaker insists on getting an answer from the heart, he snaps. He delivers a three-minute speech on the demise of the United States as ‘the greatest country in the world’.

Initial reaction to his tirade forces him to take a three-week vacation, during which a lot of changes are made to his team. Most of his producers switch to another program, not only due to the recent mishap but also due to Will’s personality. Will’s boss is forced to hire another executive producer to fill in some gaps, and purposefully hires someone Will has got a history with.

After much quarrel, news breaks about the BP-oil spill, and everyone has to put their differences aside and work together to deliver the news. This is where ‘The Newsroom’ really starts to shine. Sharp, speedy dialogue followed by snarky political statements are delivered. Aaron Sorkin basically put ‘The West Wing’ into a new setting, but that isn’t something bad. Instead of the first power, he now approaches politics from the fourth power, the media, and their failing abilities to deliver the truth to the people.

Not only is this a great new series I’d be more than willing to watch, it is also a great example of what’s wrong with 24/7 news broadcasters like CNN and Fox News, not by being an example of one of them, but showing how it could be done. Critical reporting, without any bias whatsoever, making sure the government doesn’t screw like they did with the BP oil spill.

If you want to watch it, here’s a magnetlink you can open with your bittorrent-client to download episode 1: