Make 2017 Yours by Keeping to Your Resolutions

After the dreadful 2016, 2017 has arrived. In 2016, we saw Trump take victory over Clinton, we saw the British exit from the European Union decided through a referendum. We saw numerous terrorist attacks in 2016, most notably in Brussels, Istanbul and Berlin. In Turkey, a failed coup took place, giving Erdogan a carte blanche to cleanse the three pillars of government from critics. Numerous musicians, actors and comedians died, concluding in the family tragedy which first took Carrie Fisher, and her mother Debbie Reynolds the day after. Furthermore, 2016 was again the hottest year on global average meaning that we are fast approaching a critical point of no return. No, 2016 wasn’t pretty. All the more reason to let it behind and look forward to 2017. There’s a problem though: 2017 doesn’t look like it will break any trends. In a few weeks, Trump will officially be president of the United States. Article 40 will most likely be triggered by Theresa May, fulfilling her duty towards Brexit. And, if you’re Dutch like me, 2017 will see important parliamentary elections which, at the time of writing, might give victory to right-wing populist and xenophobe Geert Wilders.

No, things look absolutely gloom for 2017. That is why I recommend that you, now more than ever, try to improve yourself in order to find joyousness. You will most likely not find happiness in 2017 unless you create it yourself. Self-improvement will cause happiness. With the world on the brink of disaster, it is important that we help each other in whatever way we can.

Each year, people write New Year’s resolutions. Some statistics on them:

Those are some poor statistics, and it might deter you from even trying to begin with. Your resolve might be wavering as we speak. However, have no fear. I’m going to help you.

Most resolutions are too unrealistic. Trying to go to the gym three times a week, for instance, is near impossible. If you fall ill, you might miss an entire week of working out. You might forgive yourself because you were sick, but your subconscious already prepares itself in order to deal with the next setback to your resolution. Soon, when you went only once or twice, your mind will find an excuse such as ‘being too busy’. If this trend continues, you will go less and less, and will (in most cases) eventually give up entirely. Having a resolution which says “go to the gym at least once a week” will therefore be better than “go to the gym three times a week”.

Your goals must be realistic, but you also have to be strict with yourself. Peer pressure helps, for some. Tell your goal to someone close to you, and you will feel like you let them down by not following up with your resolution. This is especially good if you find no quarrel with letting yourself down, but have trouble letting down others (like me).

It also helps when your goal is visible – by which I mean: written down or printed out and hung up somewhere were you can easily see it. Confronting yourself with your resolutions is a good way to keep them. In order to do that, I have created a template you can download and print to make this part easier. Said document can be seen below, you can download the .pdf by clicking the downwards arrow:

As you can see, there are three resolutions on each page, with two differing types. One is weekly, the other is monthly – in order to keep your resolutions attainable. If you want to start reading more, finishing a book a week might be too much for most; hence the monthly resolution as well. There are multiple configurations, so you can pick the one (or two) page which fits best with your resolution and print that one out.

I base this on exactly nothing, but I think three resolutions hits the sweet spot. Try keeping at least two of them, and track your progress. You might even want to set milestones (I put them at 25%, 50% and 75% of the year) you can treat yo’self for making it that far.

If you can’t think of a third resolution, I’ve got you covered. HERE is a link with the 50 most unoriginal, often-used and clichéd resolutions. Now, go and make 2017 yours. And, in order to keep up with my second tip; here are my resolutions for 2017; 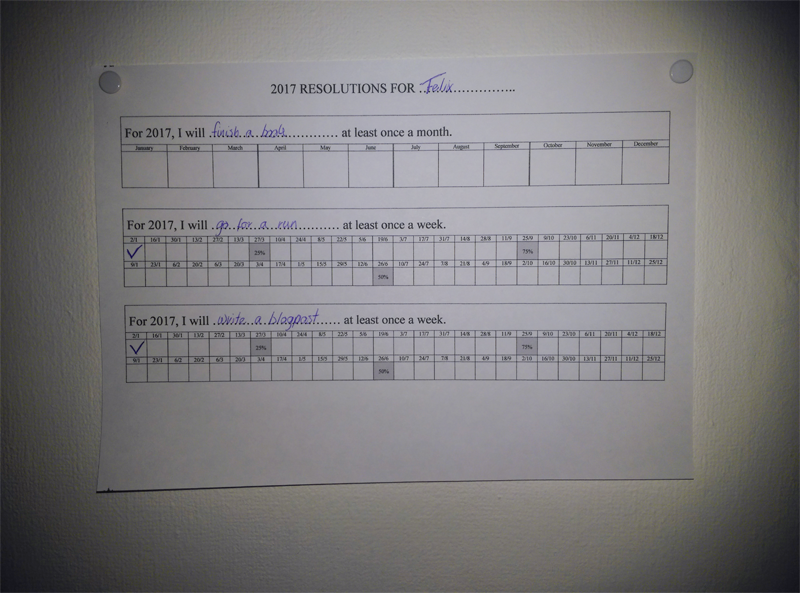