This post will detail the goings-on at the Circuit de Montmelo for the second day of the second week of testing, taking place on March 8th, 2017. If you want to know more detail about these pre-season tests, or want to know the importance of it, feel free to read this post first. For the recap and analysis of week 1, as well as the predictions I made for this second week, you can click here. For yesterday’s post detailing day 5, click here.

9:00: As the green flag signals the start of the sixth day of testing, Alonso is the first to head out. An optimistic move by McLaren, after the continuous problems with their Honda power units. Bottas heads out with a mission, sporting four ultra soft tires, setting a 1:21.229 within seven minutes of green light. Wehrlein heads out as well, experiencing no issues with his back. Half an hour in and Alonso finally puts a time on the boards, but he’s miles off on his ultra softs; 1:35.717. Just before the end of the first hour, Sainz Jr. heads on track, meaning that all cars have made an appearance now.

10:00: Verstappen is continuously putting decent lap times on the board running mediums in what seems like a race simulation, driving between 1:22s-1:23s. Not long after, he switches to softs and immediately nabs first place from Bottas in a 1:20.516. Sainz is the last to record a time, but it is not something to write home about, a decent 1:23.933 on super softs takes him to the fifth spot. 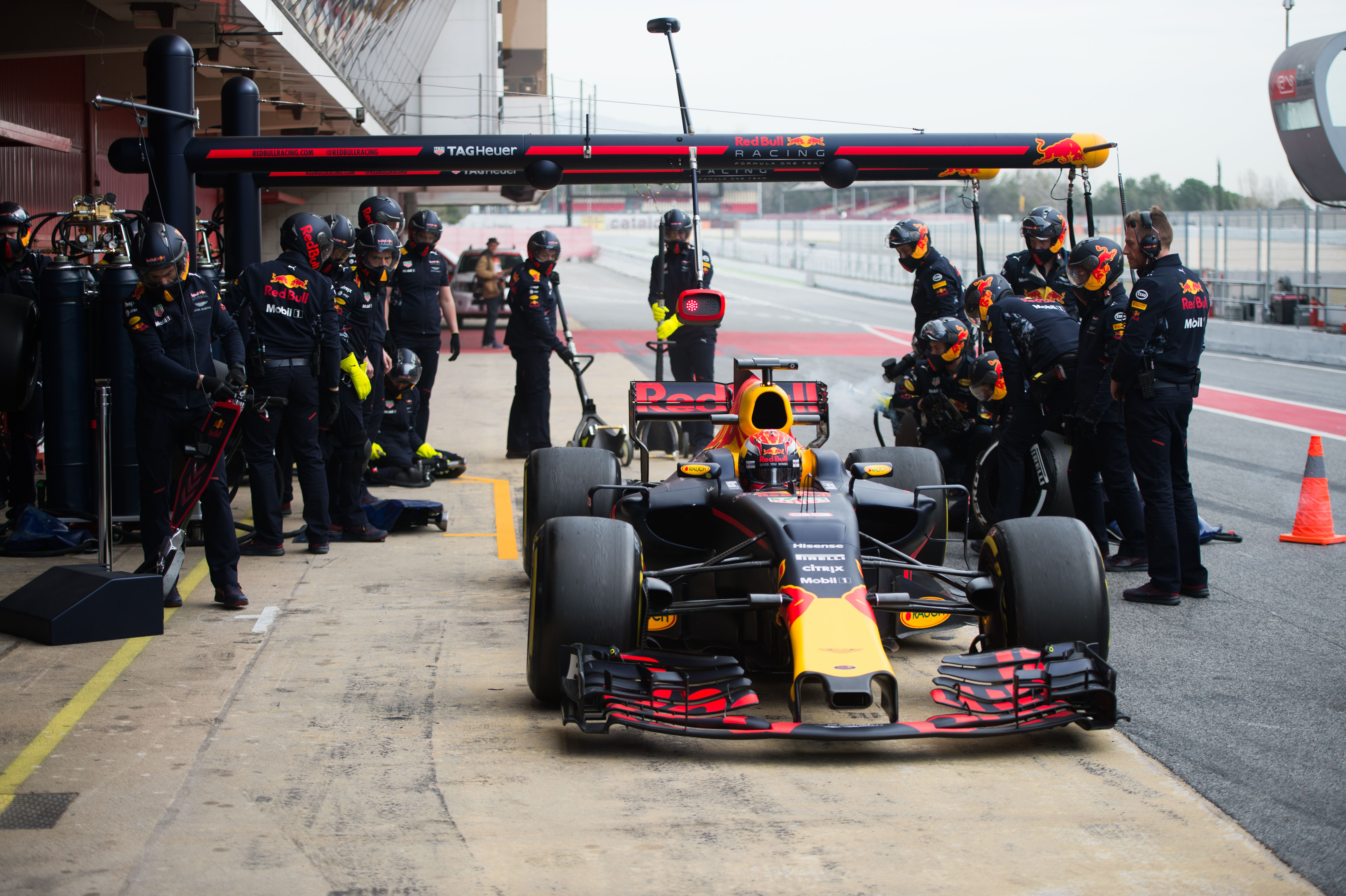 11:00: Alonso is still being ultra careful of the MCL32, while Verstappen improves his fastest time to a 1:20.432. Hülkenberg does a run on super softs, taking him to a 1:21.213, which means he is in second. Apparently, McLaren has given Alonso the green light to rev higher than stationary, as he puts in a 1:23.210. Bottas attempts a hot lap on super softs, and certainly succeeds. He clocks in at 1:19.310, taking .395s off the previously fastest time this year – also driven by Bottas on Day 3 of testing. Meanwhile, Mercedes’s nearest competitor in these tests, Ferrari, is nowhere to be seen as Raikkonen has completed just fifteen laps today.

12:00: Raikkonen finally re-enters the track with an hour left on the clock. Massa does a 1:19.487 on ultra softs, which would’ve set headlines yesterday, but is now .177s short of Bottas’ flyer. Ferrari reports to have undergone a fluid systems check. Massa is back at it again, inching closer to Bottas after setting a 1:19.420, now just .110s short. Meanwhile, Raikkonen is gradually climbing the charts, going third in a 1:20.406. Right before the checkered flag drops, he attempts another run, but falls short by .012s.

14:00: After thirteen minutes of total silence, Perez is the first to head out. Others follow, such as Lance Stroll who makes his first appearance since his ‘problems’ on day 3. Red Bull reports they’ve changed Verstappen’s engine, but will not be ready for another hour. Stroll gets on the board with a pretty decent 1:22.814, while Hamilton posts his first lap as well in a time of 1:21.371. With the hour almost over, there is still no sign of Palmer (taking over from Hülkenberg), Ericsson (taking over from Wehrlein) and Alonso.

15:00: Ericsson is the first of those three to appear on track. Verstappen leaves his pit box with the new  Tag Heuer engine. Stroll reports back to the pits, having driven 26 laps in an hour. Honda reports no problems for Alonso today, but he is yet to head out this second part of testing today one and a half hours in. 110 minutes in, he finally does leave the track, immediately followed by the first red flag of the day. No, it isn’t a blown Honda engine, it is caused by Raikkonen going off in turn 3, crashing mildly hard backwards into the tirewalls. 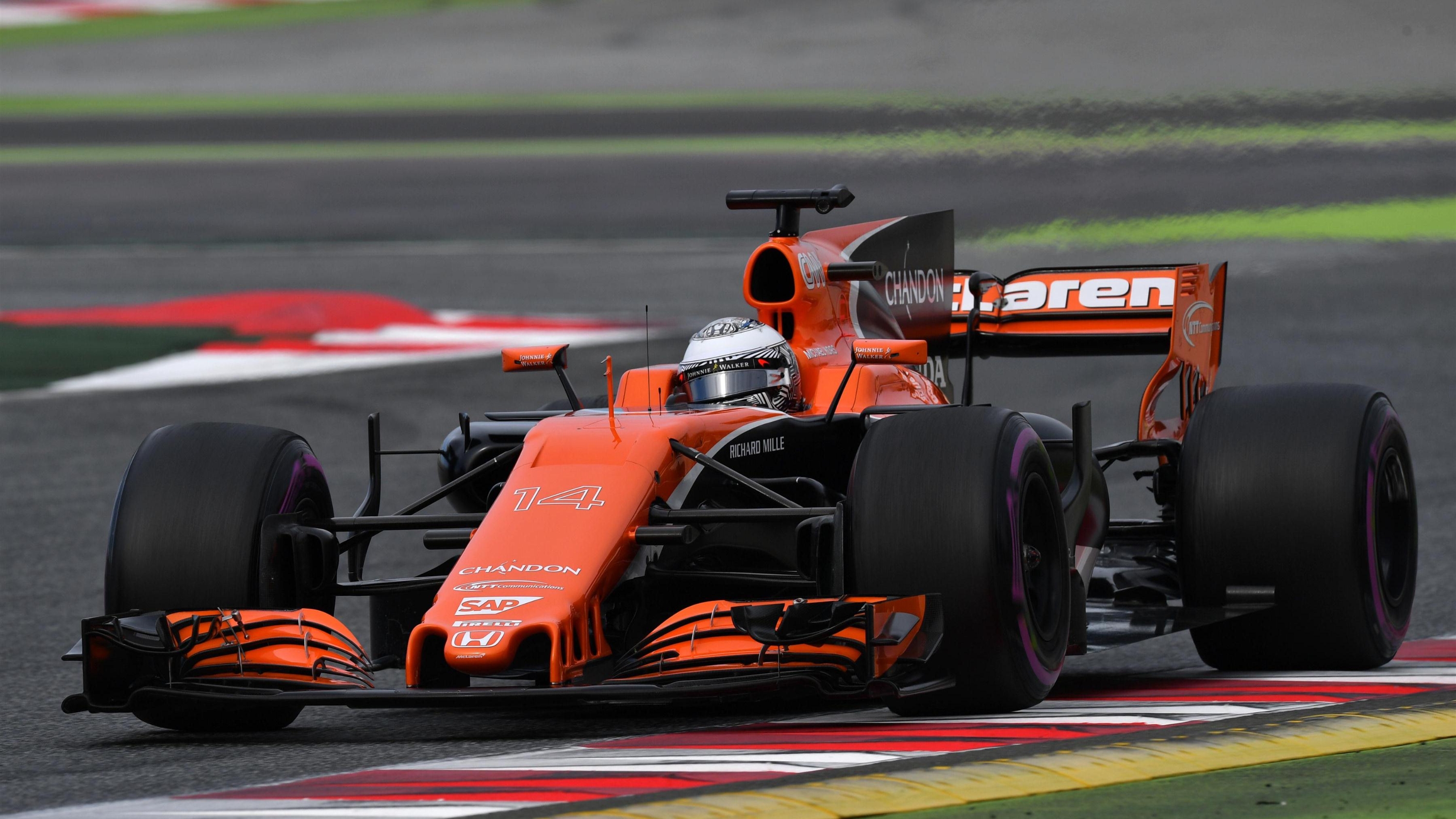 16:00: Fifteen minutes later the lights turn (to the color blinds among us) from brown to a different shade of brown. Palmer is still MIA, but shows he’s still alive 145 minutes into the afternoon session. Meanwhile, a large portion of the field is attempting to improve on their lap times, but no real shock is caused. Stroll is slowly making his way up the chart, Sauber is still lagging behind, while Palmer is stuck in 14th.

17:00: The final hour also marks the return of Alonso on the track, who is joined by Verstappen, Hamilton and Ericsson. Verstappen is doing a race simulation on mediums again, doubling his lap tally in an hour. Stroll does a 1:20.579 on super softs, but is still over a second slower than his experienced teammate. Ferrari announce they will not continue today, as the damage to the car appears too great to fix in the remaining minutes. With twenty minutes to go, a second red flag is flown, caused by Verstappen who had just surpassed the 100-lap barrier first today. His car has stopped in turn 12, which appears to have been hampered by a mechanical issue. The session is prolonged to 18:05, meaning there are still ten minutes left once the red flag gets lifted. Four minutes later though, Ericsson causes this day’s third red flag by stopping in turn 8. In despair, organizers decide to throw in the towel by waving the checkered flag at 18:02. 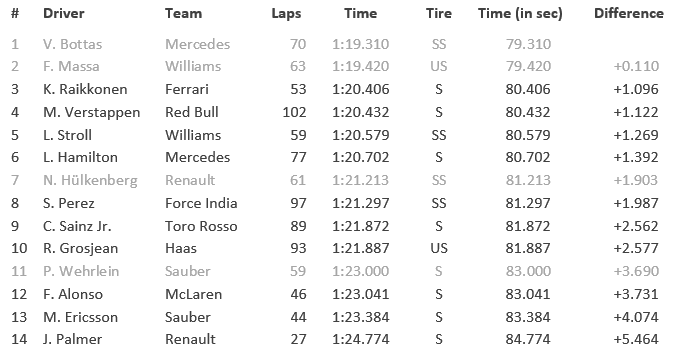 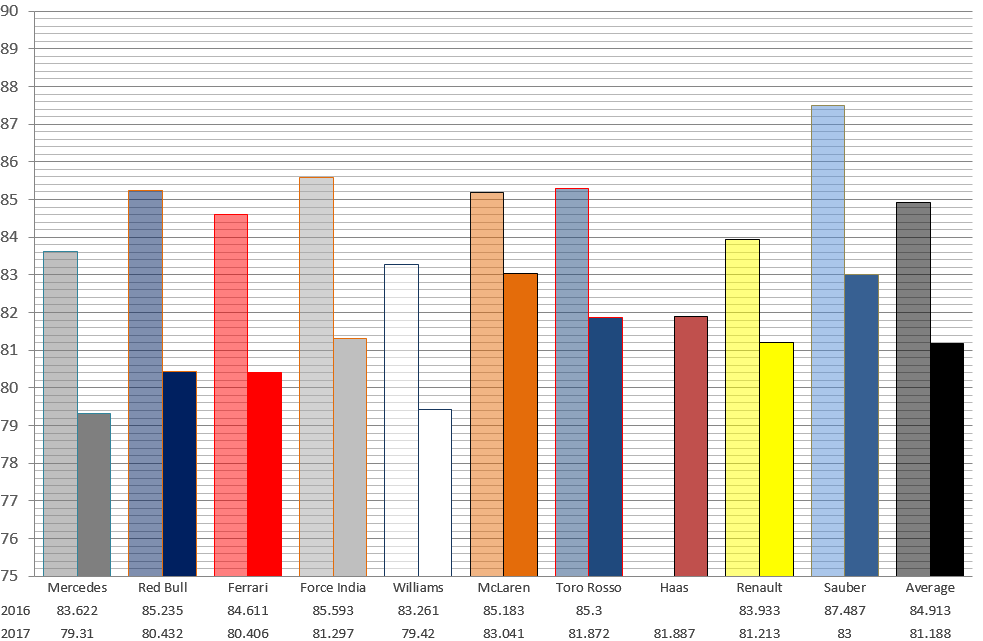 Lets just start right off the bat with Mercedes. Mercedes took a very casual approach yesterday, but proved today they are still king of the hill. Massa came close in his Williams, but Bottas’ lap time proved just a tenth of a second too quick. Still, I suspect there is more to come. I don’t think Mercedes went all out on that lap, and I think they will show at least a 1:18.9XX tomorrow or on the final day. I do think Williams is running close to their current limit, while Red Bull is not showing us anything. Ferrari had an off-day, especially compared to yesterday. Not just because of Raikkonen’s unfortunate crash, but they were taking things slow before that as well.

In the midfield, or at least I think we can call it midfield by now, Force India, Toro Rosso, Renault and Haas had decent days, though Palmer’s running in the Renault this afternoon was cut short by some unnamed problem. Perez put in a lot of miles today, which is good for them. Toro Rosso had no problems two days in a row now, showing they have fixed what held them back in the first week. Haas looks very comfortable with their 2017 Ferrari engine, and double that for Force India with their Mercedes power unit.

At the back though, I am seriously worrying for McLaren. While their lap time might not be entirely indicative of their actual pace, the fact they are running at this pace means they are very, very concerned about their engine. They were at the bottom of the mileage-chart again today, with just 46 laps to their name. Sauber on the other hand seem pretty reliable, but can be considered now to be the stable backmarker for the upcoming season. I hope they can surprise me, but their pace spells gloom. 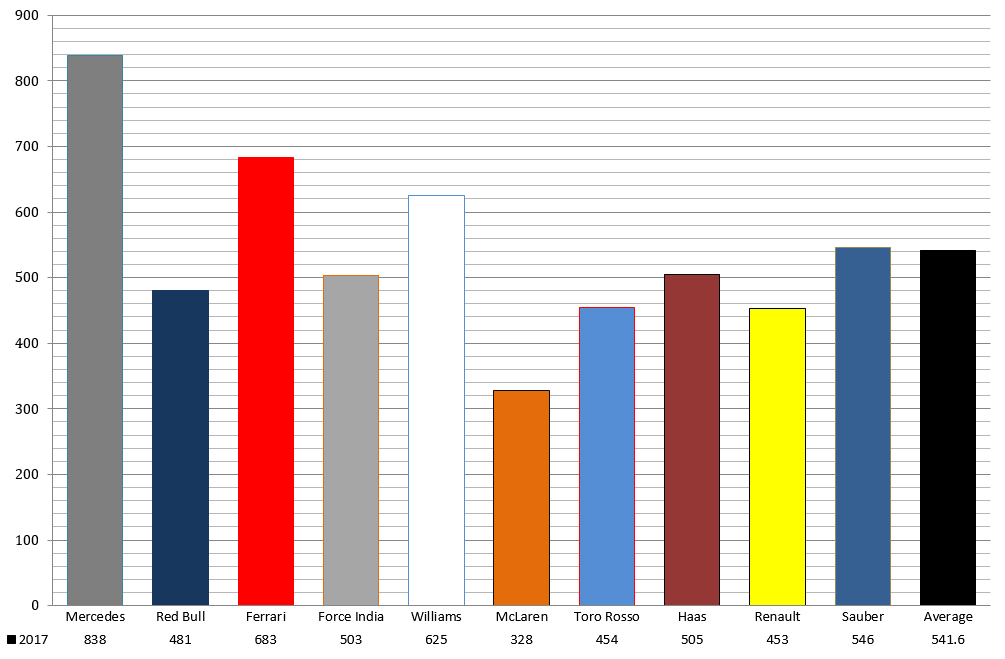 After gaining some mileage on Mercedes yesterday, Ferrari threw away everything they gained by only posting 59 laps against Mercedes’ combined 147. Verstappen was the only one to go over 100 laps today, his 102 laps are a nice boost to Red Bull’s tally. Force India, Haas and Sauber are still ahead of them, but the difference is closing up, while Toro Rosso and Renault are about 30 laps down on the top running Renault-engined car. This graph, however unfortunately, shows McLaren’s problems best, I think. They are 115 laps down on the nearest team, something they will not be able to recover from in the coming two days as they have averaged at just 55 laps per day over the past 6 days of testing. 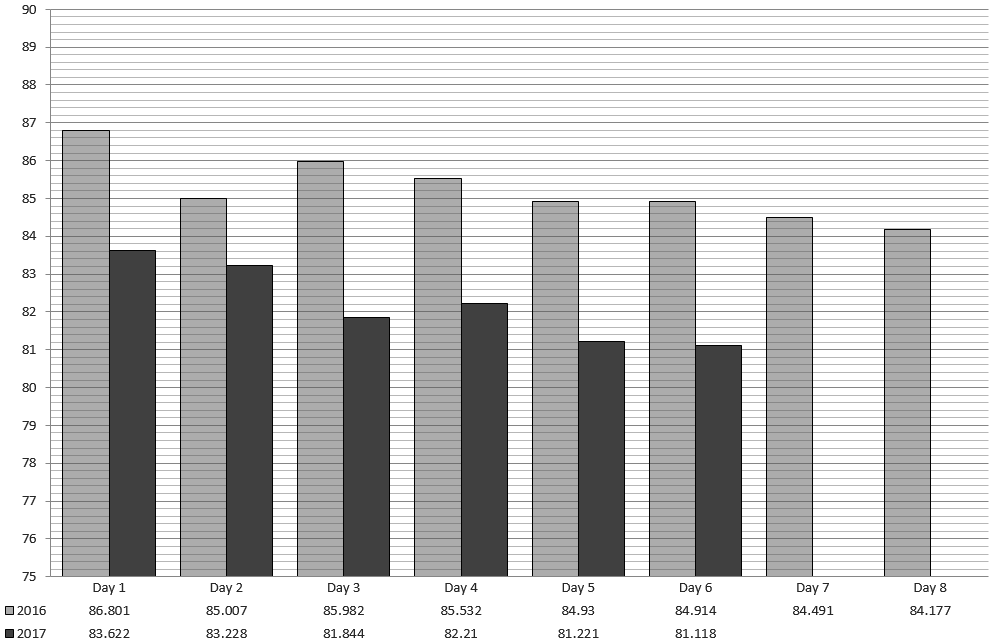 As I predicted yesterday, today again saw a slightly faster average lap time. I reckon, for tomorrow, the gloves will come off even more than they have the past two days. An average time below the 81s barrier might be possible if there are no teams hampered by technical problems slowing their potential. In terms of individual performances, if Massa will drive again tomorrow, I predict another top 3 place for Williams running in the low 1:19s. Bottas might break the 1:19 barrier and post a lap time close to 1:18.9, or he might record a 1:19.1. Whatever the case, I think we will see another record-setting lap tomorrow if the weather allows it – and it looks like it will.

Thanks for reading again today, I will be back tomorrow for another recap, this time for day 8; again the last day of testing. It won’t be my last article on testing, however, as I will do another, full testing recap analysis which will probably go up on sunday! If you’d like to support me writing this blog, why not share it, or like my page on facebook or follow me on twitter, or consider whitelisting me from your adblock! See you tomorrow!