Starring: A lot of Japanese actors I don’t know 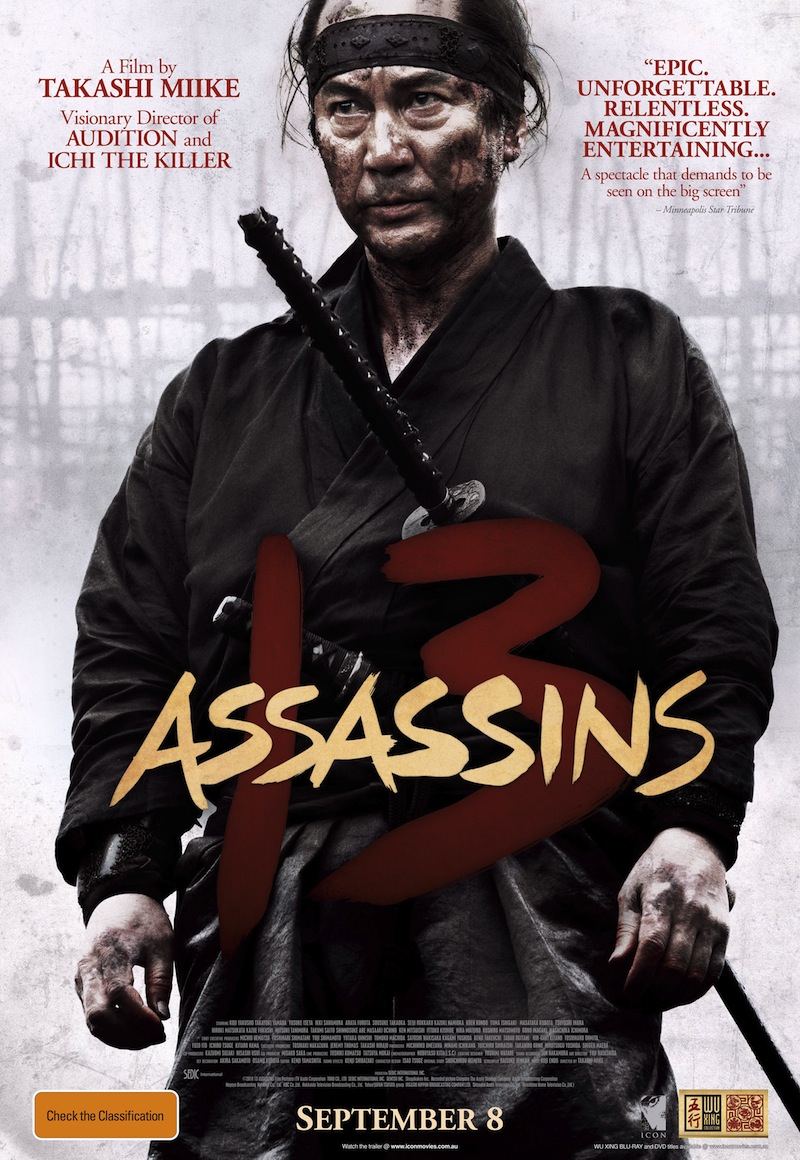 I’ve seen, prior to this one, exactly 1 other film by Takashi Miike. I once  went through a bargain bin and found ‘Ichi The Killer’. Intrigued by the horrible clichéd title, I bought it and watched it. What I saw was one of the most insanely sadistic movies ever. And I loved it.

Now this. 13 Assassins takes place in 1844 Japan. It tells a fictional story, with some historical elements as a baseline. It is about the sadistic half-brother of the Shogun (the military commander of the Emperor) who tries to increase his power over Japan. In the official history books, the guy dies of a sudden disease. In this movie, however, he is attacked by a task force of 12 samurai, and one peasant.

I have a weakness for Japanese cinema. Movies like Ichi The Killer and Battle Royale are able to show a story with limited resources (the budget for this film was six million US$), and therefore find creative ways to do so. 13 Assassins is no exception to this. It feels very real, unlike most Western action movies. They are able to show a level of emotion, uncertainty, which isn’t easily found in Western culture.

The film starts quite incomprehensible, I couldn’t quite remember the characters and eventually they blurred into one big group, with the exception of the few main characters. I don’t know if that is my fault for not being able to tell Asian faces apart, or that it is deliberately done by the director, but it works for the film: the characters form a group in which everyone is equal, and everyone has to fight as one to defeat the enemy. It doesn’t matter which one is person A, B or C, in the end, they are all part of the alphabet-group.

This movie seems to me as what ‘The Last Samurai’ should have been, an epic battle set during the transition from feudal Japan to the modern Japan without Tom Cruise running around to ruin everything. It is a great film, but it is hard to recommend. You have to enjoy the genre, the culture and/or the director. If you do want to watch it, be sure to watch it with the original Japanese voices; the English dub is dreadful. You might need some subtitles though…