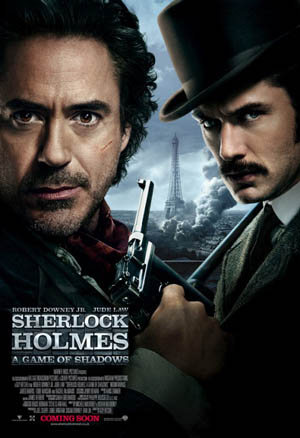 Robert Downey Jr. had almost been forgotten, until he was cast as Tony Stark in the ‘Iron Man’-movies. After portraying a believable, gritty persona, he had offers flying his way. One offer in particular got his attention, Guy Ritchie’s Sherlock Holmes-reboot. He signed, and made a wonderful performance as a sociopathic Sherlock Holmes, who, as always, was aided by his friend and doctor John Watson, as played by Jude Law. The film was released to critical acclaim, and did reasonably well in the box office.

It wasn’t a surprise a second movie would be made. As the story of the first film progressed, a new villain arose as what would later turn out to be Holmes’ arch-nemesis. If you are familiar with any of Arthur Conan Doyle’s stories, you know this is James Moriarty. But who is this man? You only hear his name drop once or twice during the first film, his identity unknown until the second one.
Holmes and Watson are joined by ‘Madame Simsa’, a gipsy fortune-teller played by Noomi Rapace (famous for playing the Girl with the Dragon Tattoo in the Millenium-trilogy). Holmes believes she is crucial to solving the Moriarty-case, which results in her being forced to join the two arguing friends. She shows promise for being a love interest to Holmes, but by the end of the movie, not much of that is left.It’s too bad I had just watched the BBC series, so the whole ‘Holmes’-story arc was still fresh inside my memory, which resulted in few surprises story-wise.

They did do a good job of capturing the same kind of dark humor the first movie had, but none of the characters really grow during the movie. Where the first film had Holmes heavily relying on his friend Watson, this movie has Holmes trying to leave Watson out of the turmoil caused by Moriarty. Obviously, this fails, but nevertheless, the teamwork doesn’t shine as in the first film.

Guy Ritchie did a good job on this, but the problem is that he’s bound to Arthur Conan Doyle’s legendary story. He does use some new angles to the story, but the essence is still the same. Because of this, this movie had very little surprises left for me. I had a small chuckle every once in a while, and it is an entertaining movie, but it isn’t as surprising, good or funny as its 2009 predecessor.

I could however, suggest you watch this movie. Even though it is not as good as the first one, it is still a very good film. Just don’t get your hopes up too much for it, and you’ll have an enjoyable evening (if you’re watching it in the evening. could be morning, etc.). That’s it for this review, and remember: I didn’t spoil the ending if you know the original story. You knew the ending all along.