New Books, or, How To Look Smug While At The Pool 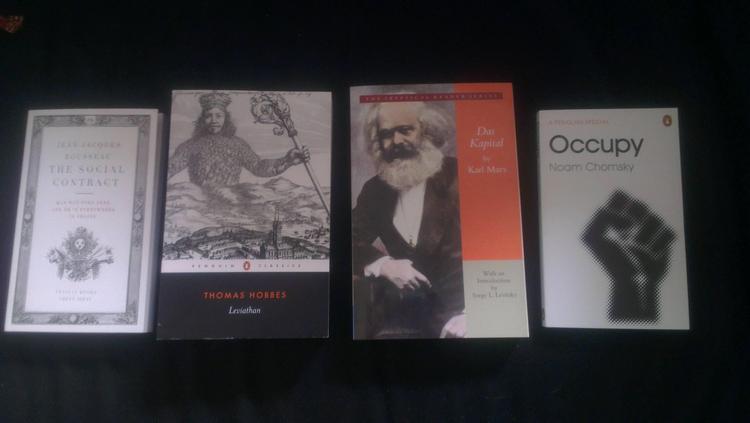 In a month’s time, I’ll be travelling to Italy with (probably) my brother-in-law-to-be to where my parents are supposed to be (a campsite just south of Florence, Tuscany). I’ll bring my electronic toys (tablet, phone, etc), but I will finally have some peace and quiet time to read some books. I’ve had a few on my list already, but I’ve just added these on there as well. Some of these have to do with my current assignment (I’m writing a paper on Anonymous as a social movement), some are purely for enriching my intellectual mind. Please note, I will not be making any summaries on these. It’s a holiday, goddamnit.

I’ll do a rundown on the books, why I bought them, and what I will think I get out of reading them, after the jump.

Jean Jacques Rousseau – ‘The Social Contract’
Rousseau is an authority on Utopian thinking. His theories have influenced a lot of philosophers since his book was first published in 1762 as ‘Le Contrat Social’.  The tagline on the cover reads “Man was born free, and he is everywhere in chains”. It is a great summary of his works, and it still stands today. If I recall correctly, he also stated that ‘man is only truly free on the day of elections’, after which he would have to be a subordinate again for a number of years. I think I can probably use this for my essay, and for life in general. I’m looking forward to reading this.

Thomas Hobbes – ‘Leviathan’
Hobbes’ work ‘Leviathan, or The Matter, Forme, & Power of a Common-Wealth Ecclesiasticall and Civill’, first published in 1651, has been used as an authority on law, property and much, much more. It’s quite thick (~725 pages), which could pose a problem. I might not read it entirely, just some interesting passages. It’s a good one to have on my shelf anyway, both due to the thickness and due to the weight of the words written on those numerous pages.

Karl Marx – ‘Das Kapital’
I don’t think this book needs an introduction. Karl Marx formed the basis for Communism as we know it today, however, much of his teachings have been used differently: the USSR practiced Leninism and China used Maoïsm, both derivatives from Marxism. I’m going back to the source, the 296 pages of Marx’ Das Kapital. I don’t know if I have enough time to wrestle through the entire book, but it could be a good starting point for future essays, to which I can use this book as a reference. And as with Leviathan, it will undoubtedly look good on my shelf.

Noam Chomsky – ‘Occupy’
The only contemporary work on the list. Almost brand new, this book was published in 2012 by the ‘linguïst-turned-philosopher’. It handles the Occupy movement, and I’m interested to learn what he has to say about the subject. Why did it fail? Why did it subside? I haven’t read the summary yet, but I’m expecting to see a few interesting observations from mister Chomsky. The cover (furthest on the right) is a nice work, fitting the simple design ethics most companies have used since those became popular with the introduction of the iPod.

Well, there you have it, a complete rundown of my newest investments.