So I heard the internet likes Cats 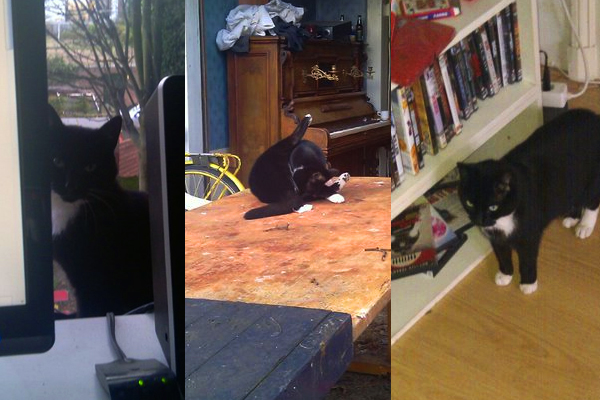 Cats, cats, cats. The internet is full of cats. So, I’ll introduce you to mine. Well, he’s not actually my cat, he’s my studenthouse’s cat. He was adopted from the animal shelter about three years ago. He had been a stray cat for the first 2-3 years of his life, after which he was submitted to the shelter. When we got him, he had to go on a special diet because of the plastic still resting in his stomach.

I think he still equates plastic with food. Whenever there’s something plastic in the room, he starts sniffing it, after which he starts chewing it, ripping it to pieces. We try to teach him not to do it, but teaching a cat to not do something is like rowing up a waterfall. You can try peddling all you want, the moment you take a rest you’ll immediatly be at the start again.

We had a previous cat, which died at age twelve. We started to get mice again, so we had to take some form of action. So we got Dick. Yes, he’s called Dick. He’s not named after the phallic genitalia, but after our nearby grocer, which used to give our deceased cat free food, as a tribute.

Our cat is a fierce mouse killer. We don’t really have mice, but when we do, they’re already dead. Sometimes he likes to keep them alive for a while, to play with. Sometimes, he’ll drop them at someones doorstep, as a present perhaps. Sometimes, he eats them. The sound when he crushes the little skulls is terrifying.

Dick likes to be social. Whenever there are multiple people in a room, he always comes to check what is going on. Whenever there are new people around, he usually jumps in their laps to make acquaintances. He enjoys being petted, not being held. He’s about six years old, so he’s got some years to look forward to. He’s a great cat.

I just wish he didn’t threw up all over the place. STOP EATING PLASTIC, you stupid cat. That’s not food.

As an added bonus: he looks like the ‘Felix’-cat from the catfood commercials.