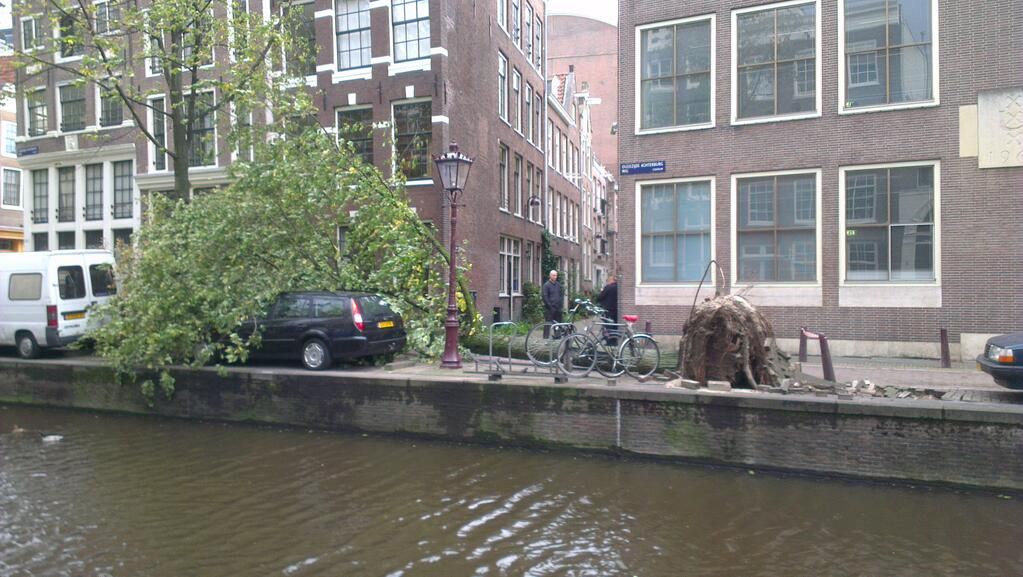 I walked past this fallen beast, due to the dreadful storm that kept me from being at home for ~3 hours.

Yesterday, there was a storm in the Netherlands. The biggest storm in my lifetime, actually. Since 1990 (I was born in ’91), there hasn’t been a storm such like this one. And I was right in the middle of it. I thought it was fun. It broke up the daily routine a bit, it brought some excitement to my daily life. This is my story. My story on how I survived, which some of the media already call, the ‘storm of the century’.

I woke up at 8 o’clock. I had class at 11 o’clock, so I had to leave at 10. Normally, I would get up at 9, but because there had been so many warnings the day before, I decided to put my alarm an hour early in case the storm would’ve arrived earlier than expected. It didn’t. When I woke up there was some wind, but nowhere near someone would describe as a ‘storm’. I monitored the national railway website to see if there was anything going on on my trajectory. Nothing yet. As usual, I took the 9:57h train to Amsterdam, which goes through Haarlem.

Everything went alright, until the last moment. A minute before we would arrive on Amsterdam Central Station, there was a loud bang on my window as a tree dangerously swept against the train. However, we could continue our journey, and we arrived just two minutes late on our destination.

I continued on my normal routine – walking from the platform to the trams. I was waiting for one of the possible trams to arrive, when I heard another loud bang. This time, I heard people screaming and running towards a piece of woodwork that had fallen over just 30 meters besides me. Before I could react, there were already 50-100 people hoisting up the woodwork to free the people who were laying underneath. Call it selfish, but I decided everything was under control and there was nothing I could do to help, so I kept standing there waiting for my tram to arrive.

Which did arrive a minute later. Riding with the tram, we came past the point where the woodwork had fallen. I counted four people laying on the ground being helped by the police and other officials (I later learned these four people all had to go to the hospital, but weren’t severely injured luckily). The tram was dangerously swaying sideways under pressure from the wind. I remember it vividly, as I had to stand because there were no seats available.

I arrived in time to get a coffee and drink it patiently before class would start.

And then… it was time to go back. It was ~17:00h, and I had to get home. However; still no trams – so I walked for 20 minutes to Central Station. At CS, I had another lucky break: there would be a train departing for Haarlem in about 3 minutes. I ran up to the platform, just in time to get into the overcrowded train. 30 minutes later, I was at Haarlem’s station. But from there, I still had to get to Leiden. And the only possibility where busses. Just plain, regular busses.

I got on one, after waiting for 15 minutes. However, I had underestimated its estimated travel time: about 1,5-2 hours. Luckily I had downloaded the newest ‘The Walking Dead’ episode that morning in the spare hour I had. After watching the episode, the battery of my tablet immediately gave out. I still had a book I could read.

19:45, that was the time I arrived in Leiden. It had taken about 3 hours to get home, but at least I had gotten home. It was quite interesting for me, however, if you didn’t enjoy reading this, it was probably a typical case of ‘you had to be there’.

Tags: amsterdamHaarlemLeidennetherlandsStormStorm of the Century