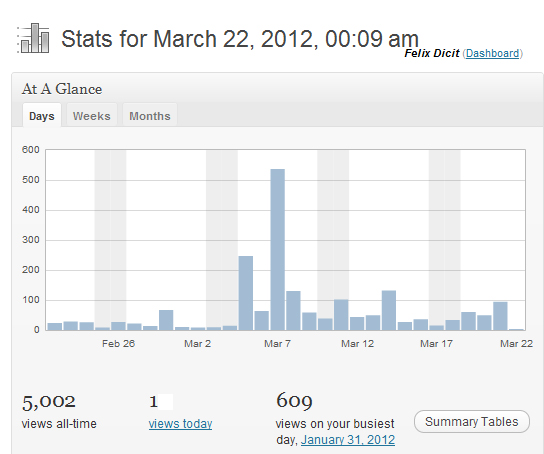 Yesterday, at about 23:00h, saw the 5000th visit to my webpage. I don’t know who you are, and you probably don’t know you where the 5000th, but I both want to congratulate you and thank you. You know, for visiting my site. I shall post some statistics on my view count. You know, because statistics rule. That, and I have to be able to do this for my exam next tuesday, so this’ll be a fun way not to study.

Okay, so up until 0:00h this morning, I had 5012 visitors. This blog has been up for 53 days until that point in time. Which means, 5012/53=94,5 average visitors per day. The median, however, is a lot lower, because I had some traffic spikes due to people being linked here by my sister. I don’t know what it is exactly, because my CMS doesn’t keep track of views per day for more than a month. Because of that, I can’t calculate the mode either. So there goes my plan. However, I’ll post what I dó know.

February is still my biggest month in traffic, but March is going to overtake that in the next four days, I believe. March has an average of 84 visits a day, while February has only 75. The average of January, however, is way above that with 545 visitors on average. This however, isn’t fair, because there where only two days in January, while this blog was up, left. These where heavily influenced by my sister’s blog, so I’m not going to take January into account.

However, the change from 75 to 84 average visitors per day is something I value highly. It’s not much, but it does prove that interest isn’t falling.  Thanks to you, you, you and you. And ofcourse you, I wouldn’t forget about you.