Let’s go for something different now, a change of pace. Something serious. Being a Political Science major, I (have to) read a lot of political themed literature. Not all of them are easy to read through, especially the older works from the likes of Hobbes and Locke are quite hard to read if you are not a native english speaker. I imagine that even people who do have english as their first language, find it hard to understand what is written down by these enlightened philosophers. But what I do understand, is that Montesquieu proposed the trias politica: three powers which keep each other in balance. Executive, legislative and judicial powers are there to prevent one taking too much power for themselves. If one grows too big, the other two will bundle forces in order to bring that power to its knees.

With the rise of the newspapers, radio and later television, the media became the fourth controlling power. Revealing mistakes made by either of the former three, making them known to the public; raising awareness. The media would then report on the uproar caused by these actions, pointing it out to politicians, judges and bureaucrats. This went great for a number of decades, but there’s a growing problem which concerns the media as a whole.

Sensationalism in the media is rising for the past two decades. Maybe even three. But it has now come to a point where I doubt the integrity of the coverage I see on television each day. What is true, what is bullshit? What is ripped out of context? What was carefully put together to satisfy the audience? How did it come to this?

My opinion on this matter, is that its a downward spiral. In the beginning, there where fewer networks. With the emergence of new networks, these networks where struggling to get an audience. Just like my blog is struggling to retain its audience, networks needed to find a way to appeal to the public. That is why they started jumping into niches. They started conforming to their audiences, giving it what they want.

The one broadcaster that is most succesful at doing this, is Fox News. They saw that there wasn’t enough right-wing media, so they created a whole new network dedicating it to right-wing propaganda. They over-analyze anything that has to do with democratic politics, ripping footage out of context, contemplating conspiracy theories connecting Obama with Al-Qaeda. Their ignorance knows no boundaries, but it doesn’t matter. The audience loves it, because Fox News is the biggest 24h-news network on American television. They just give the audience what they want.

The effect is so large, that other networks, like CNN and MSNBC, try to defend their grounds. Certainly MSNBC has taken a swing to the left, in order to oppose Fox News. Meanwhile, nobody covers the truth anymore. 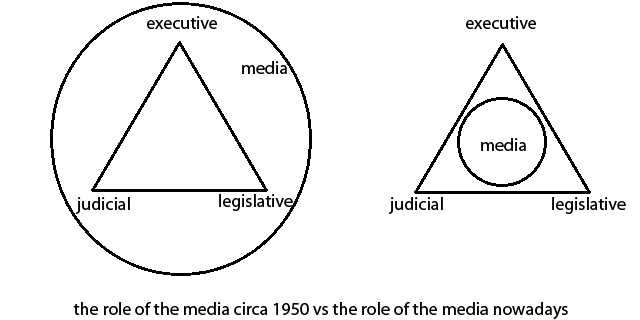 That is my problem with the media. Their previous function was to inform the public, nowadays it’s like they’re not even trying anymore. They are just trying to entertain their audience. And of course, this is all the result of capitalism. No, I’m not a socialist, but there is truth in my reasoning. Just hear me out.

Capitalism revolves around money. The statement “Money makes the world go ’round’ “, is sadly true. In order for a corporation to exist in the modern, capitalist world, you have to turn a profit to your investors. If not, it’s bye-bye for you and your employees. How do networks make money? By advertisement. Other companies trying to make a living for themselves, pay to get their name spread to the public. For more than a century, the media has walked hand in hand with corporations. But how can you trust something that is depending on payments by others to provide you with true information, especially when it is unfavourable to one of your sugar daddies?

This is what happened around the Occupy-movement. As we all know by now, this movement is targeted mainly at Wall Street, but it doesn’t end there. All over the world people started demonstrating against banks and stock markets. But the media kept it mostly silent. They didn’t want things to escalate, because this could very well mean the end of banks and large corporations, and thus their own money.

And so, coverage on the occupy-movement was mostly removed from the headlines, just small pieces interviewing some of the more irrational protesters. This gave an unfavourable image of the Occupy-movement, so that people didn’t relate to the ideals of the Occupiers. The only place where the truth was revealed, was the internet. Websites like Reddit, where during the start of the demonstrations stories explaining the situation made it to the top of the front page, where news networks just made fun of some of the clowns that where among them.

And so, the occupy-movement was kept alive by the internet, and slowly grew. Because websites are accessible internationally, it became a world-wide movement. Nowadays, the momentum the movement had gained the following months after the initial start of the demonstrations, has slowly subsided. It has sustained for half a year, which is exceptional for such a movement, but not thanks to the media, but because of the internet and social media.

Then why, why is the media still regarded as the fourth power, as their futile attempts at keeping something on the down-low failed so miserably? That’s not all, why is the media even considered as a power if it tries to work against the democratic-process?

It’s simple: politicians still think the media is a worthwhile platform to spread their ideas, directly into the livingroom of the average man, woman or child. Brainwashing them. Confusing entertainment with information, keeping people unknowledgeable in order to control them better.

There was a time the media was there for the people, giving them a voice to the far away politicians. Now, they just try to silence the truth speakers. I want them to be disregarded as a power, but this isn’t easy. All we can do is making known we are sick of the way the media is trying to meddle with our brain, making us believe things that aren’t true. This will take time, if not forever. But it is the only way for us, the people, to regain our own voices, and not let the media dictate what the public opinion is.