Barrier Breakers 2016; Turning the Internet into a (not so) New Political Frontier

A couple of weeks ago, Hillary Clinton associated Super-PAC Correct the Record openly declared to spend one million US dollars on a new project they called ‘Barrier Breakers 2016’ in an attempt to influence the online debate. “Barrier Breakers 2016 is”, according to communications director Elizabeth Shapell, “focused on pushing out positive content to Hillary supporters online to counter negative attacks and false narratives”. In doing so, the task force hopes it will help Clinton-supporters push back on ‘online harassment’.

‘The internet’ did not take kindly to this announcement. The internet, as it is now, is mostly a battleground between Sanders-supporters and Trump devotees. Sanders’ reddit-page has, at the time of writing, over 232.000 subscribers, while subreddit ‘the_Donald’ has 122.000 members. In comparison, Hillary Clinton has a little under 14.000 subscribers to her unofficial reddit page. If one saw everything black and white, he would jump to the conclusion this is because reddit is a young white male dominated website, blaming a lack of diversity in both race and gender for the popularity of Sanders and Trump over Clinton.

True – reddit is mostly young white men, as found by a survey by Pew. 69% of (American) reddit-users are male, while 31% are female.  And, of the total population of reddit-users, 66% are white. So, if you take a random redditor, there’s a 46% chance that you’ve picked a white man. The odds of that person being an African-American woman are just 3%. The disparity is big, but it does not account for the 25:1 ratio of Trump/Sanders supporters to Clinton’s following.

What does, however, contribute to this disparity is the lack of an equal starting point. Since almost half of reddit are white and male, reddits voting-system gives the largest group the biggest say in what is popular. Content putting Sanders’ in a positive frame might have inherently less hurdless to overtake than content framing Clinton positively. This makes Sanders more likely to feature on the front page of specific political subreddits, or even the front page of reddit itself (‘/r/all’). And this positive exposure, in turn, makes people like Sanders, or reaffirms their previous affection towards his persona or political platform. Drawing in new ‘recruits’, who will upvote positive Sanders content. If this were the goal for Barrier Breakers 2016, to create a more level-playing field online, than I would not object. No, I don’t condone vote manipulation, but the way reddit works makes it very prone to snowballing, and peer-pressure or groupthink might make Clinton-supporters feel uneasy to voice their opinions online.

Maybe a more female oriented website nets different results? Tumblr has a male to female ratio of 10:11, meaning ~52.5% of users on the website are women. Surely, if anything, this website must be more favorable to Hillary? Nope.

Barrier Breakers 2016 is not about creating a level playing field. It is about playing a victim card, in a manner resembling how many radical feminists have used the victim card to create a following and career online, and justify kicking loads of shins in the process;

Hillary’s supporters are more enthusiastic than Sen. Bernie Sanders’ supporters, yet oftentimes are discouraged from engaging online and are “often afraid to voice their thoughts” because of the fear of online harassment. Many of Hillary Clinton’s female supporters in particular have been subject to intense cyber-bullying and sexist attacks from swarms of anonymous attackers (Correcttherecord.org, 2016)

While there are a lot of bold and unsubstantiated claims in the statement, Correct The Record uses hyperlinks to validate their claims. One of which leads to a Politico article, the purpose of which is unbeknownst to me since it only detracts their cause. In said article, Bill Clinton complains about people attacking his wife’s online supporters, without providing an ounce of proof for said accusation. He complains about vicious trolling, profanities and sexist remarks. I can excuse Bill for not coming up with a practical example during an interview, but despite the article itself being quite sceptically written with a fairly negative undertone towards the Clintons, the most remarkable thing is that this article is chosen to establish the necessity of the program and its 1 million dollar funding. It is almost as if they could not find a better example than an anecdote by ol’ Bill. 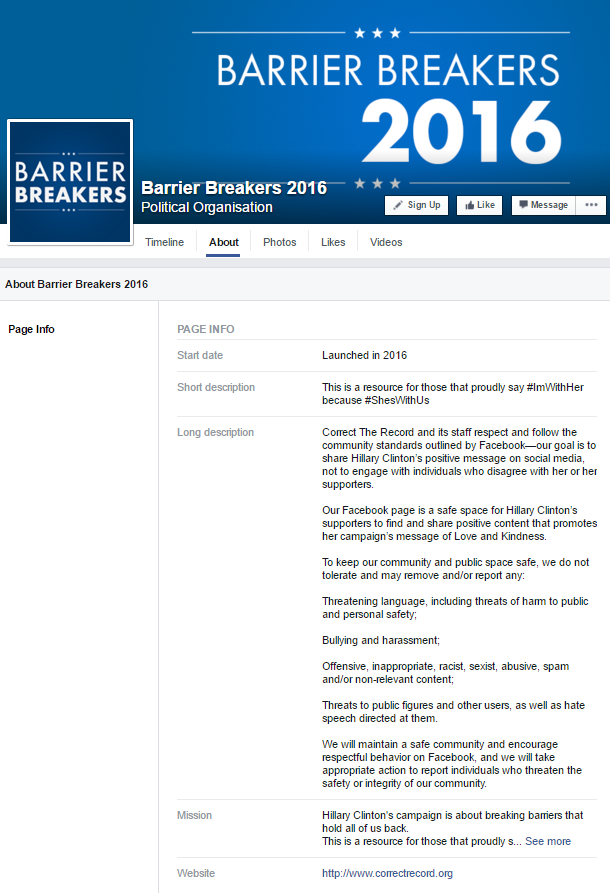 In fact, when you google ‘clinton supporter online harassment‘, the first result is an article on Medium.com detailing the response Emily Ratajkowski received when she openly endorsed Sanders, with attacks coming from Trump supporters complaining about women having a right to vote, and Clinton supporters ridiculing her for not supporting a fellow woman. To ensure whether my browsing history wasn’t an issue, I repeated the search while in the incognito-mode of Chrome, netting the same top results.

Yes, Clinton supporters might be harassed online. But so are Sanders’ supporters, or Trumps supporters for that matter. Politics is a battlefield, and if you openly take a side you inescapably make enemies. That is the nature of current partisan polarized politics, which feeds into a populist undertone. The ‘Us’ vs. ‘Them’ rhetoric. Clinton supporters call Sanders’ camp full of ‘Bernie bro’s’, while Trump’s camp calls them ‘cucks‘. People voting for Sanders call Clinton’s camp ‘drones’, or ‘establishment’, while they call Trump’s camp on their (not so) closeted racism. Namecalling the other camp is what careful political marketing has established through a strong partisan identity – paired with the online disinhibition of the online anonimity and invisibility of the ones calling names.

If not groupthink and peer pressure, why then is Hillary not proportionally represented online to her offline primary performance?

This is the reason for the discrepancy between actual Clinton voters, and Hillary’s meager support online. Not the fear of voicing their thoughts online, as Correct the Record presumes. The internet doesn’t want Hillary. The internet is not part of Hillary’s demographic. And one thing the internet hates, is being tought how to think. You don’t tell the internet what to do. You don’t openly try to influence the debate. You embrace the debate. Authenticity is key on the internet. If you are not authentic, you will get called out on it in a manner of minutes. While it has become quite a tired cliché, citing Anonymous’ ‘mission statement’ (“we do not forgive; we do not forget”) is quite appropriate for online political marketing.

The announcement itself is what Hillary did wrong. Well, not Hillary, but the Super-PAC associated with her. Everyone knows politicians fund programs attempting to frame them favorably. It’s called marketing. Some, like Obama, have perfected their way of covertly marketing on social media. The following document is a Powerpoint I created detailing how parts of his 2012 AMA on reddit where carefully planned in order for him to get the opportunity to cover his talking points;

The internet, as a political battleground, has not been entirely mapped. Technological changes combined with ever-changing popularity of websites means that political marketing strategists have not yet been able to devise a single, catch-all strategy. Step one, however, is quite clear. If you are trying to influence the debate, don’t announce it in advance. That would be akin to Churchill announcing in detail his plans for D-day. You either do it badly and get found out, or your do it well and nobody bats an eye.

On top of that, the internet’s initial outrage to the news of the PAC spending 1 million dollar on online communications is hypocritical at best. Everyone knows it is happening, just like everyone knew the NSA was tapping everything before Snowden’s whistleblowing. Be thankful you got the confirmation that you are not wearing a tinfoil hat. Yes, you are being marketed to on your favorite websites. What did you expect? Did you really not think you were being spoon-fed stories on facebook, twitter, reddit, tumblr or whatever the hell you like? If it were Sanders, or Trump, who announced they would engage with social media and pledged 1 million especially for that purpose? I am not a Hillary supporter, no, but come on. At least be happy that they announced it, so you can stay vigilant when reading propaganda online. If anything, the absence of such a program before is what surprises me, but this brings us back to my earlier point: the internet is not an important demographic for Clinton.