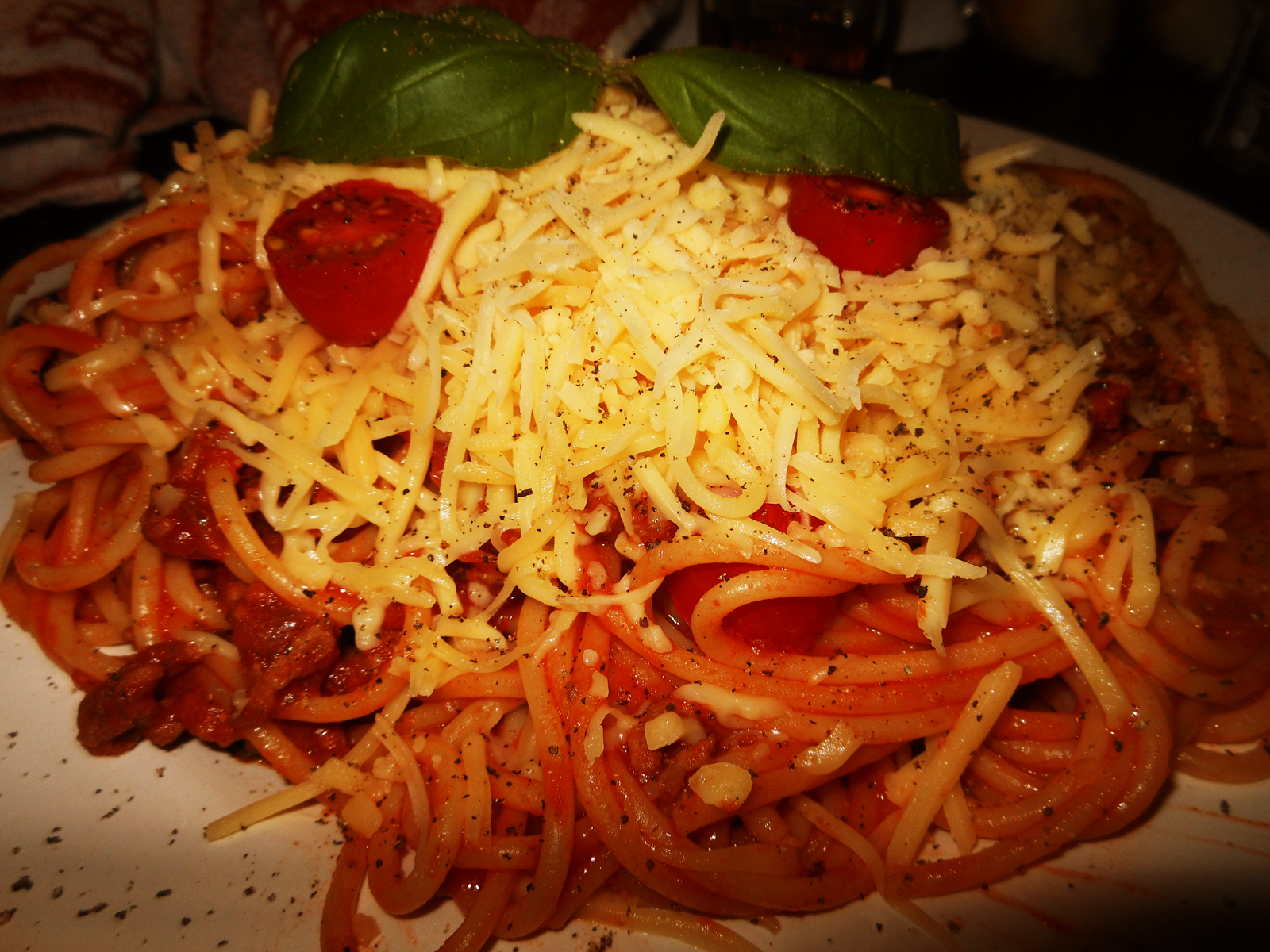 Do you see the above picture? Do you think; “hmm, that looks good. But how do I make such a meal?” Have no fear, Felix is here. I will tell you how to make this, both in pictures and text. I like to cook, and I like to experiment in my cooking. Also, I don’t ever do measurements, so you won’t find any in this recipe either. Every now and then, when I’ve made something worthwhile, I will share it in a blog post. This dish I called Pasta Quattro Pomodori, that’s Italian for ‘four tomatoes’. Why? Because it has four types of tomato in it. Here’s what you’ll need: 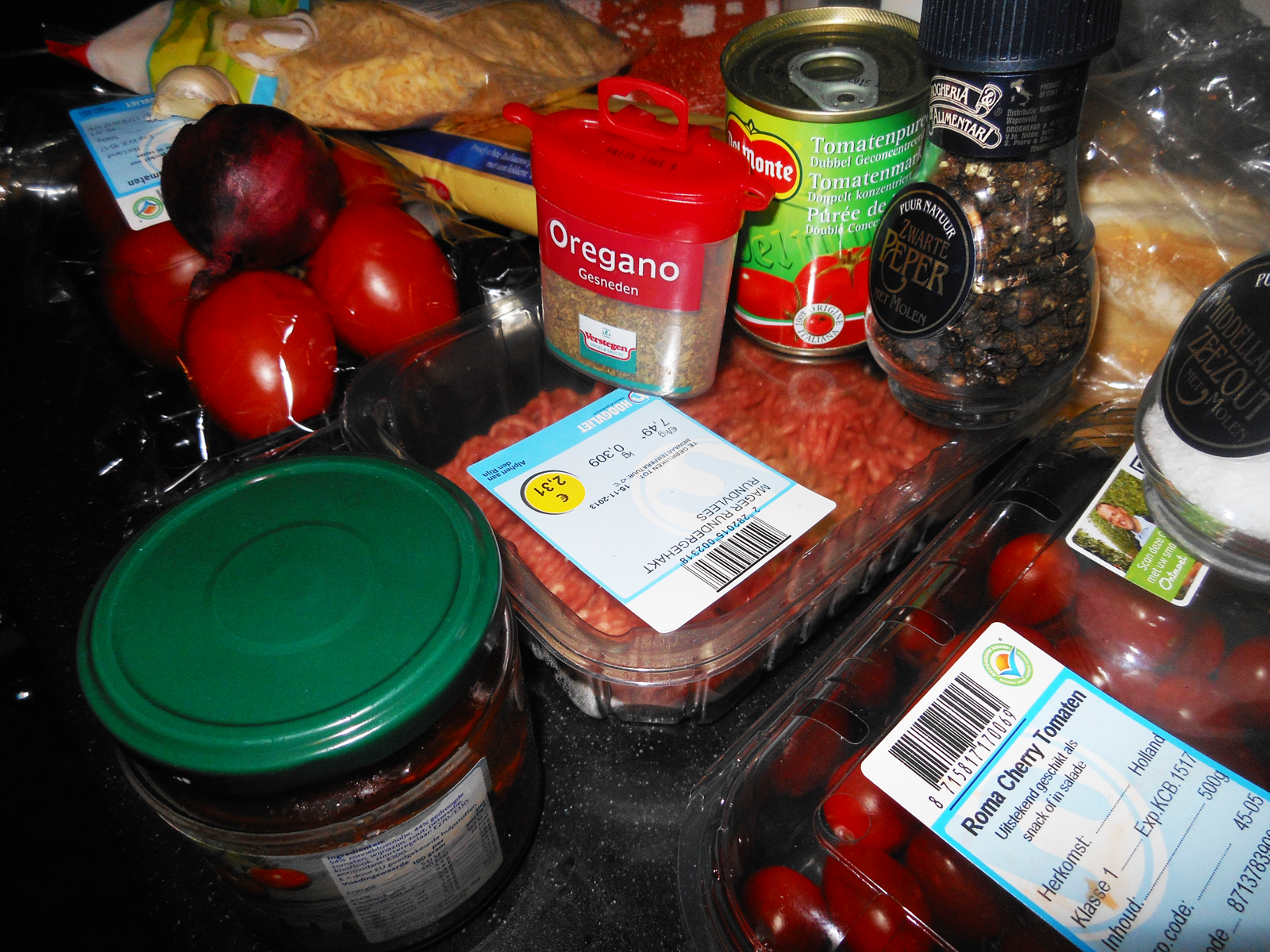 Step 1: Preliminary Phase.
Start by cutting a large cross over the crown of the (large) tomato. This will help peel of the skin of the tomato later. Put them in boiling water and boil them for about five minutes. 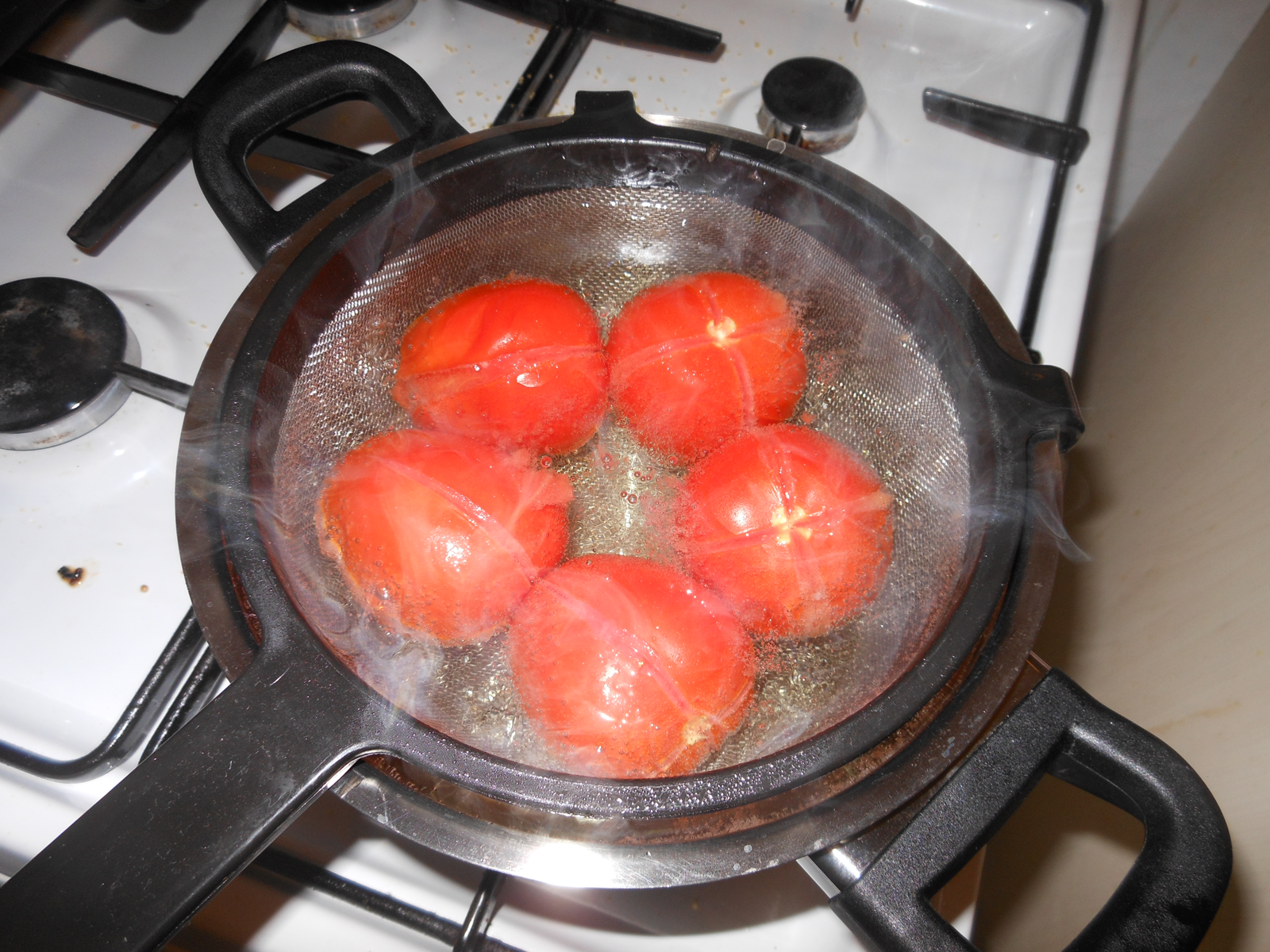 After five minutes, take them out of the boiling water and let them leak off any excess water. Take a cutting board and chop up some garlic and some onions. Also chop up some dried tomato along with it. Take the pan you’ve used to boil the tomatoes and drop the spaghetti into the same water you used to boil the tomatoes. Add some salt to the water while you’re at it. 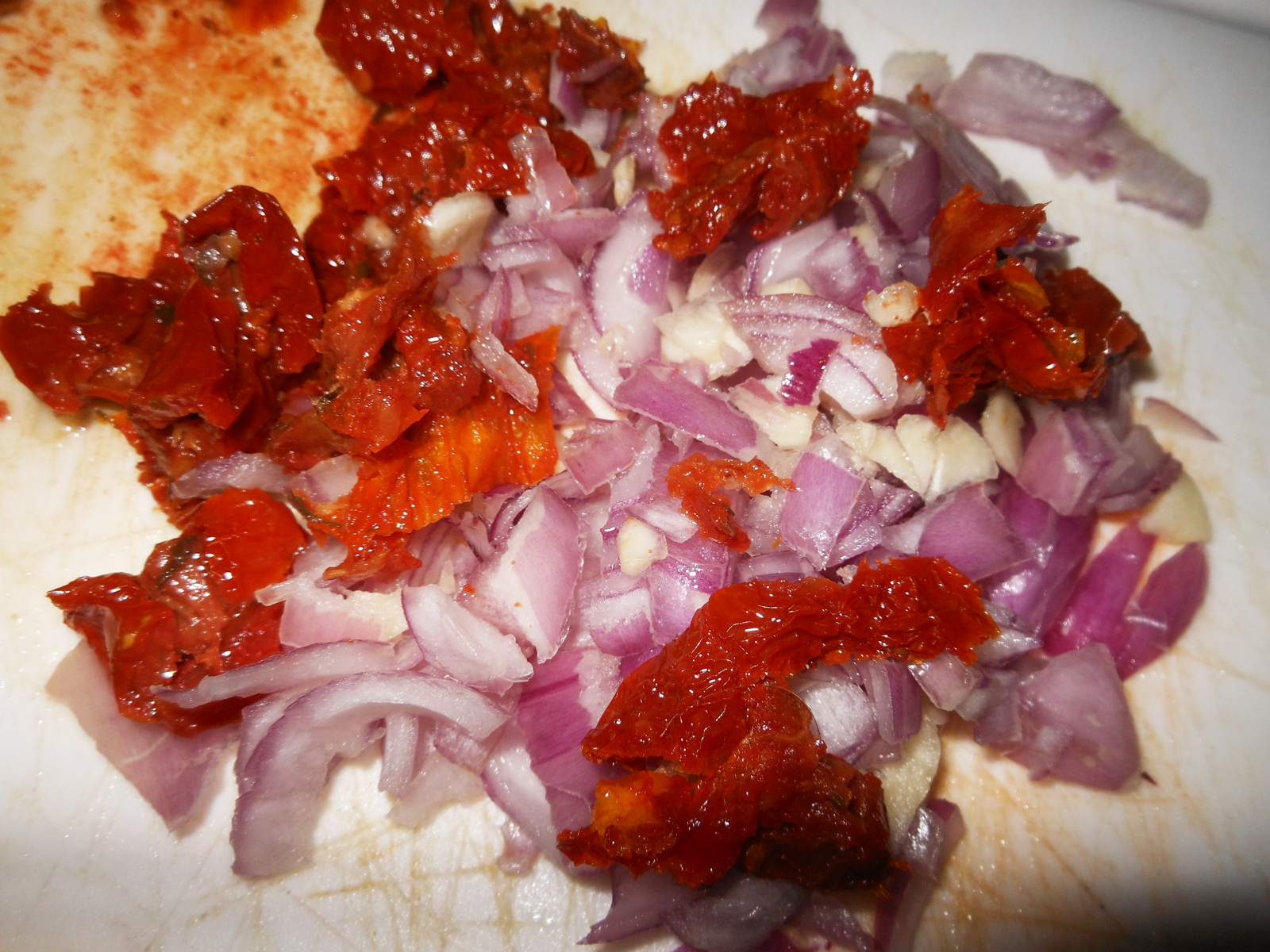 Step 2: The Real Cooking Begins
Take a large pan and put some olive oil into it. Let it gain some heat first and throw in the onion-garlic-tomato mixture second. Stir-fry this for a few minutes. When that’s done, throw in the meat. Let the meat cook until all colour has gone. It should look as grey as this: 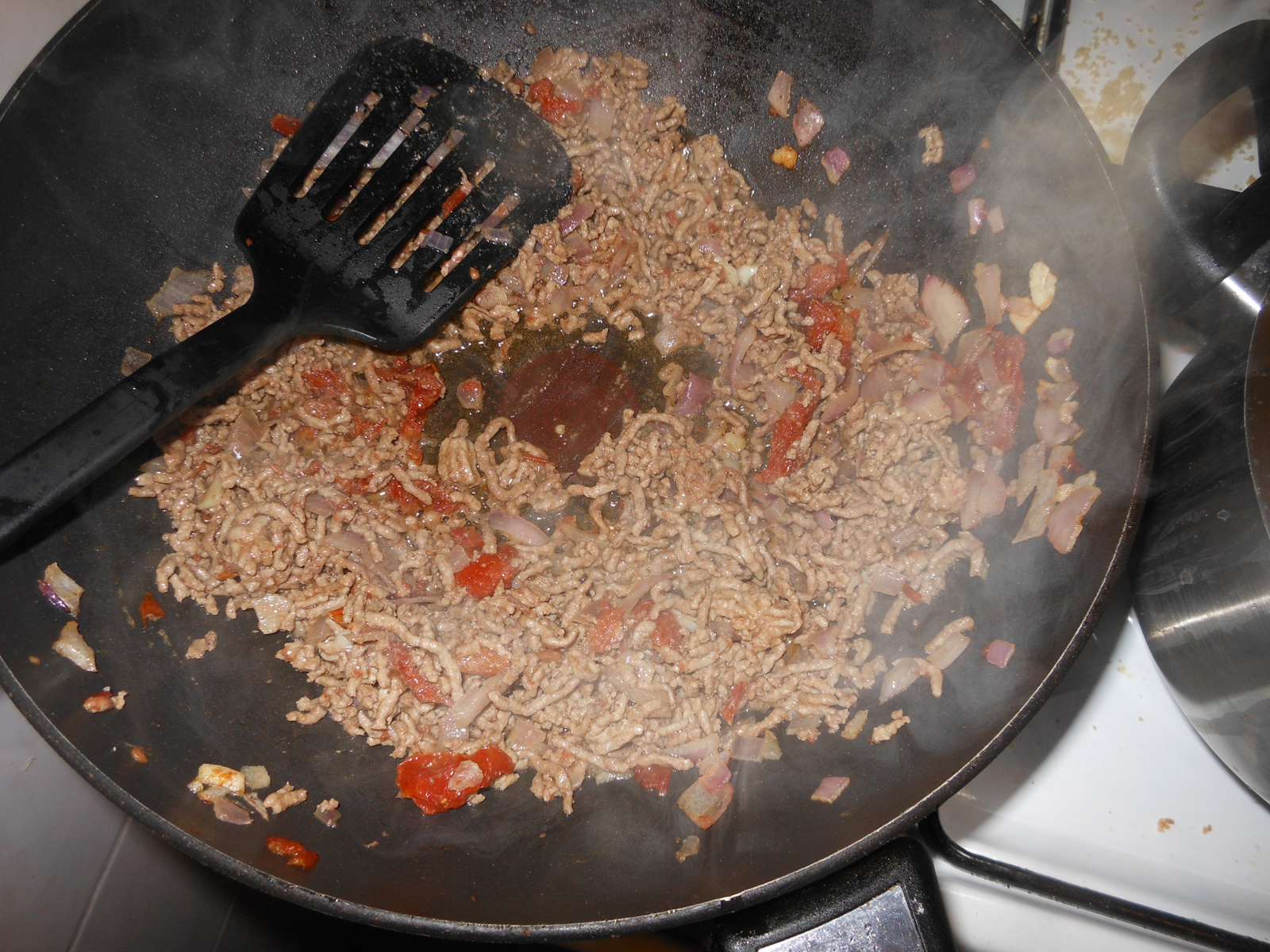 Right. Turn the heat down and start peeling those tomatoes you boiled earlier. Thanks to your handy cuttings earlier, this should be no hard task. But be careful, those bastards can be damn hot if you work too fast. 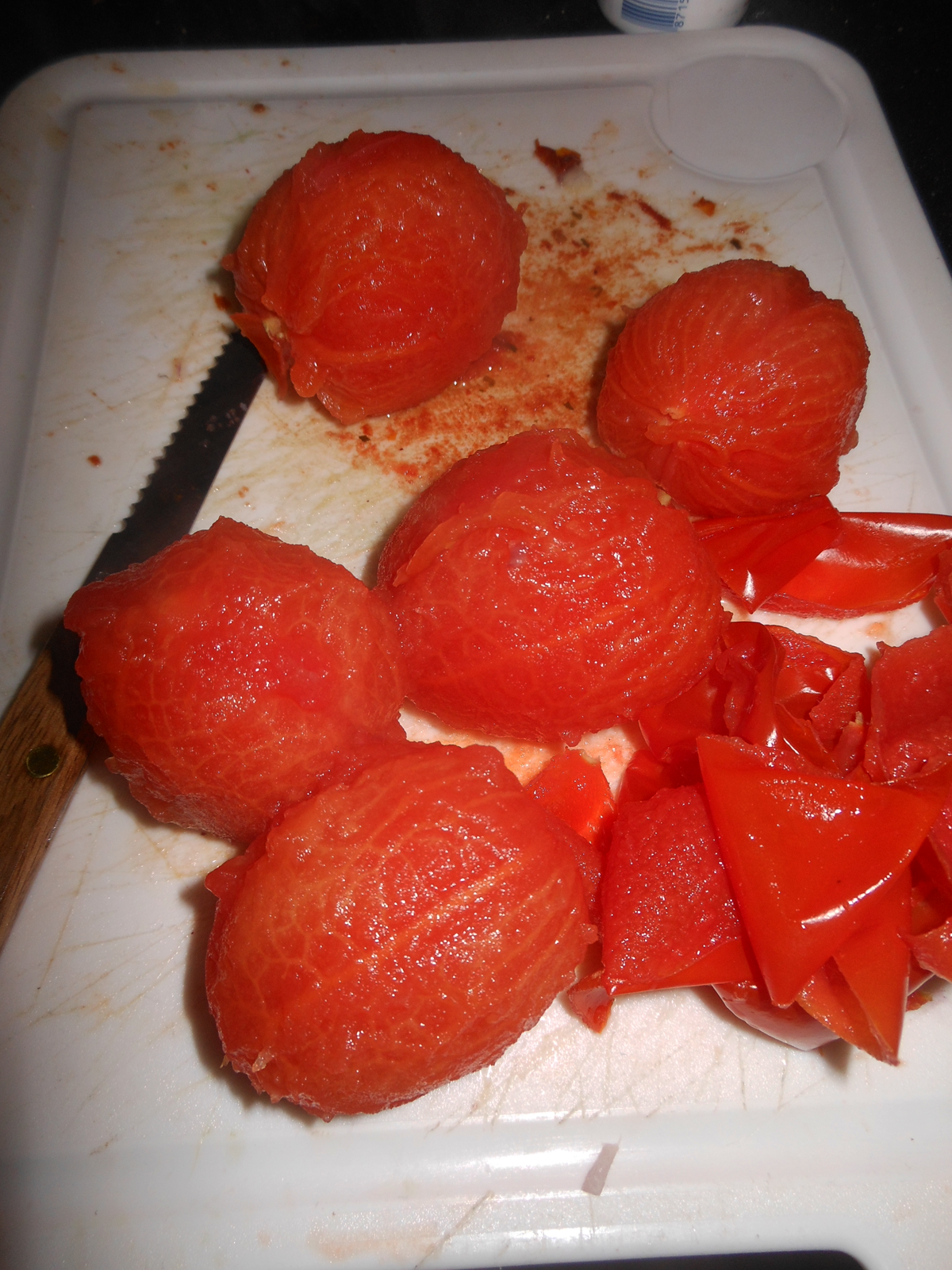 Toss them whole into the meat and start pushing down on them, they will almost instantly fall apart if you’ve boiled them long enough. If not, they can still be quite hard inside. If so, just push harder. Take your tin of tomato paste and throw it into the mix. Stir it up firmly so it looks like a proper mix, like this: 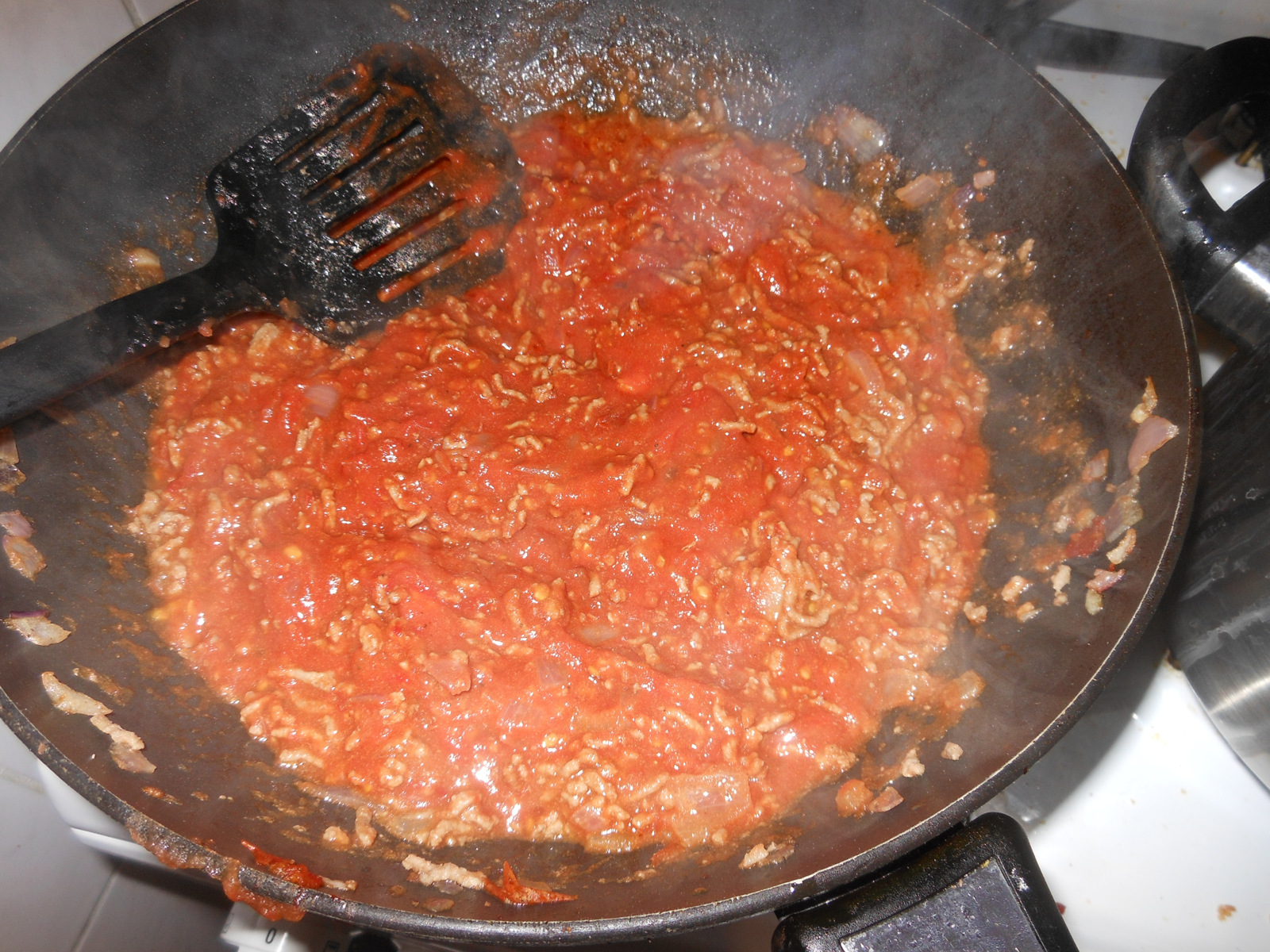 Step 3: Finishing Touches
Your spaghetti should be done boiling by now, so take it off the heat and poor about 80% of the water out. Take some fresh basil from your basil-plant and slice it up. Grab the cherry tomatoes and slice them in halves as well. 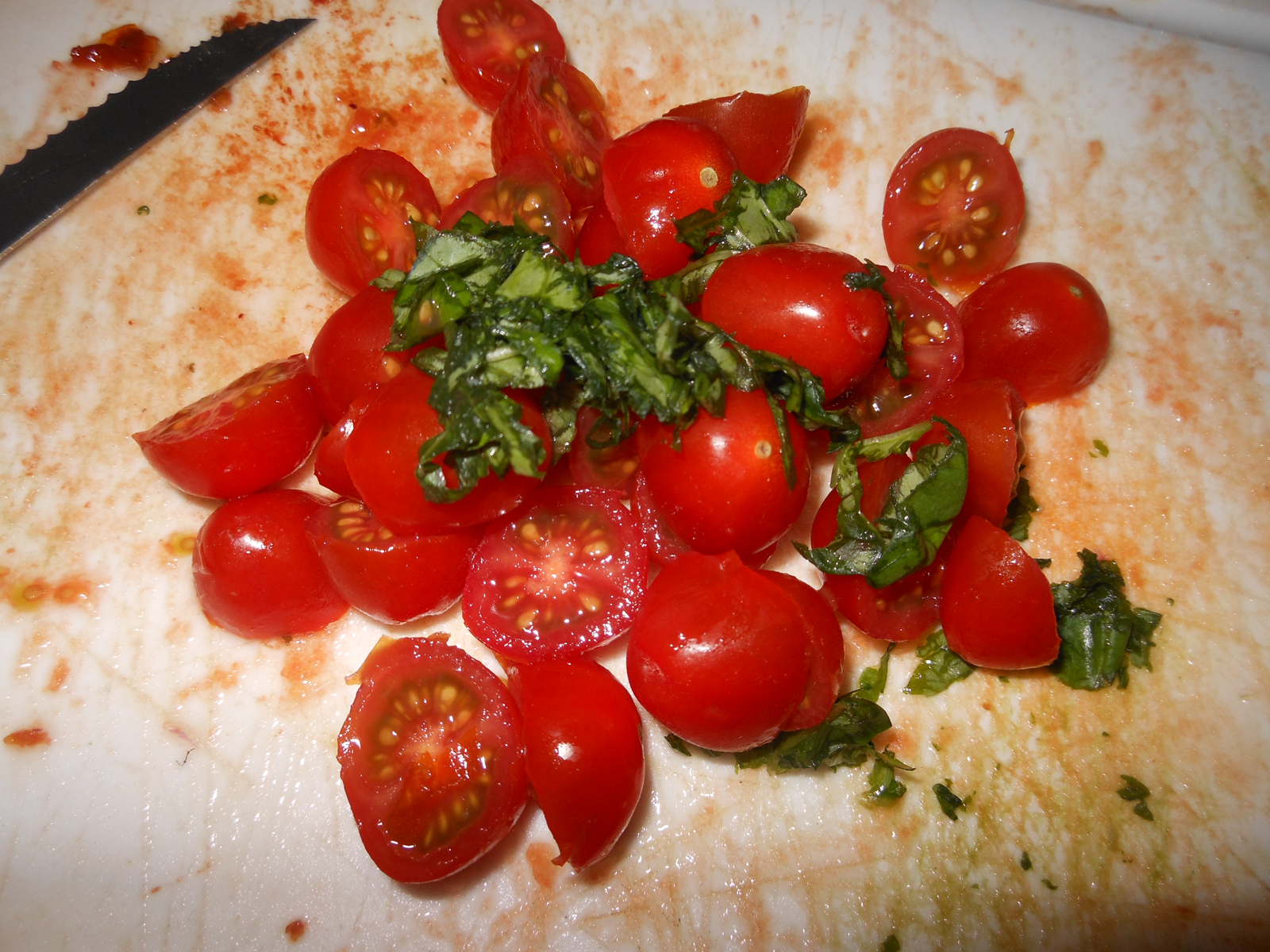 Throw them into the bunch. This is also a good time to add the herbs and spices. I usually go with oregano, black pepper and sea salt; but I guess parsley and rosemary would also fit into this meal. Throw the spaghetti and the 20% of leftover water into the sauce. It is vital you throw in the water as well, because it makes the sauce stick to the spaghetti much better. Stir it up with a spoon and a fork, like so: 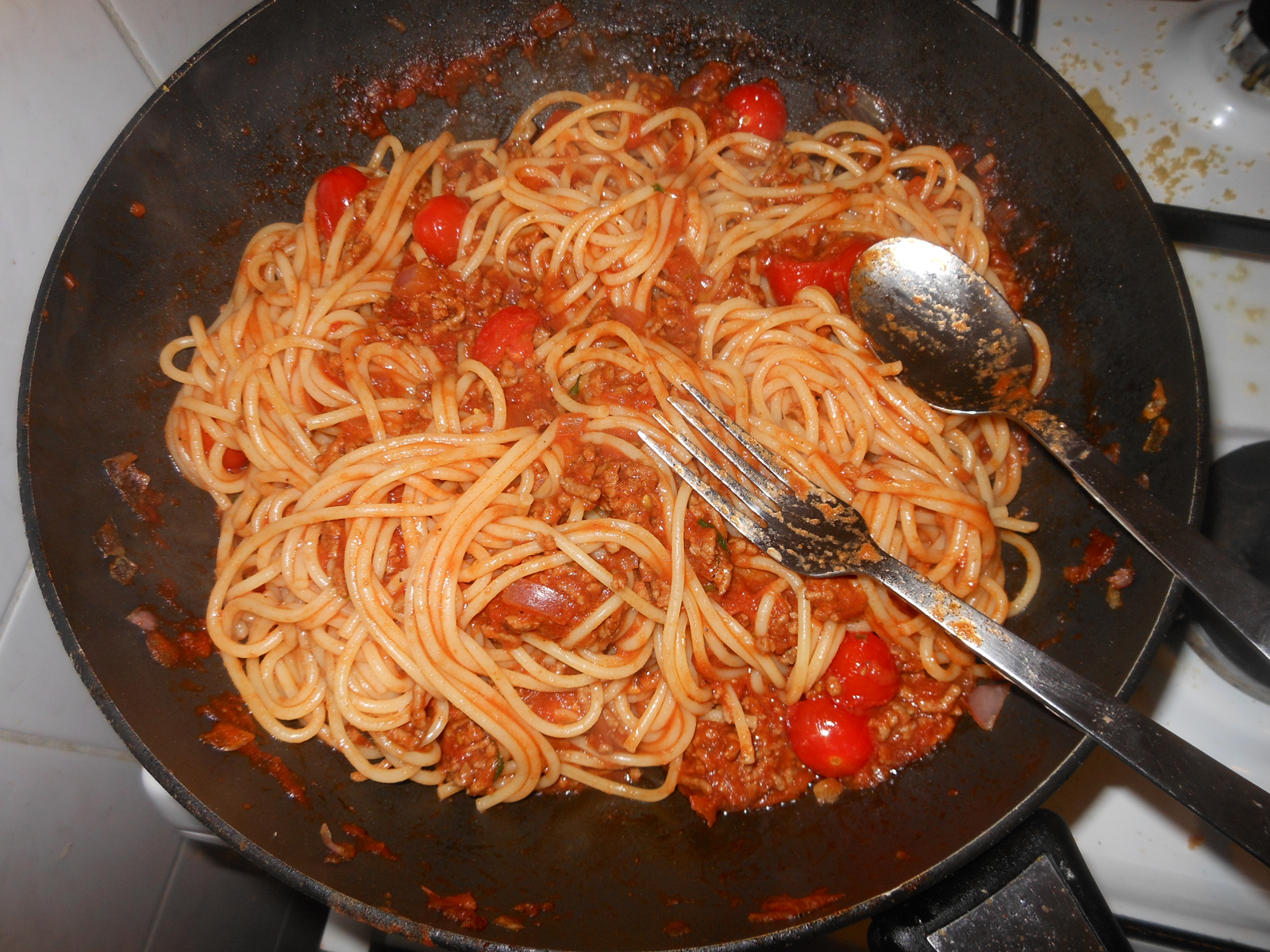 Now all you have to do is serve it on a plate, throw on some cheese. I used a creamy Dutch cheese, but I think parmesan would be best. I just couldn’t be bothered to grate the cheese myself. Add some decorative basil and/or cherry tomatoes, and finish with a large dosis of black pepper. You can never have too much black pepper. Et voila, Pasta Quatro Pomodori. Enjoy. 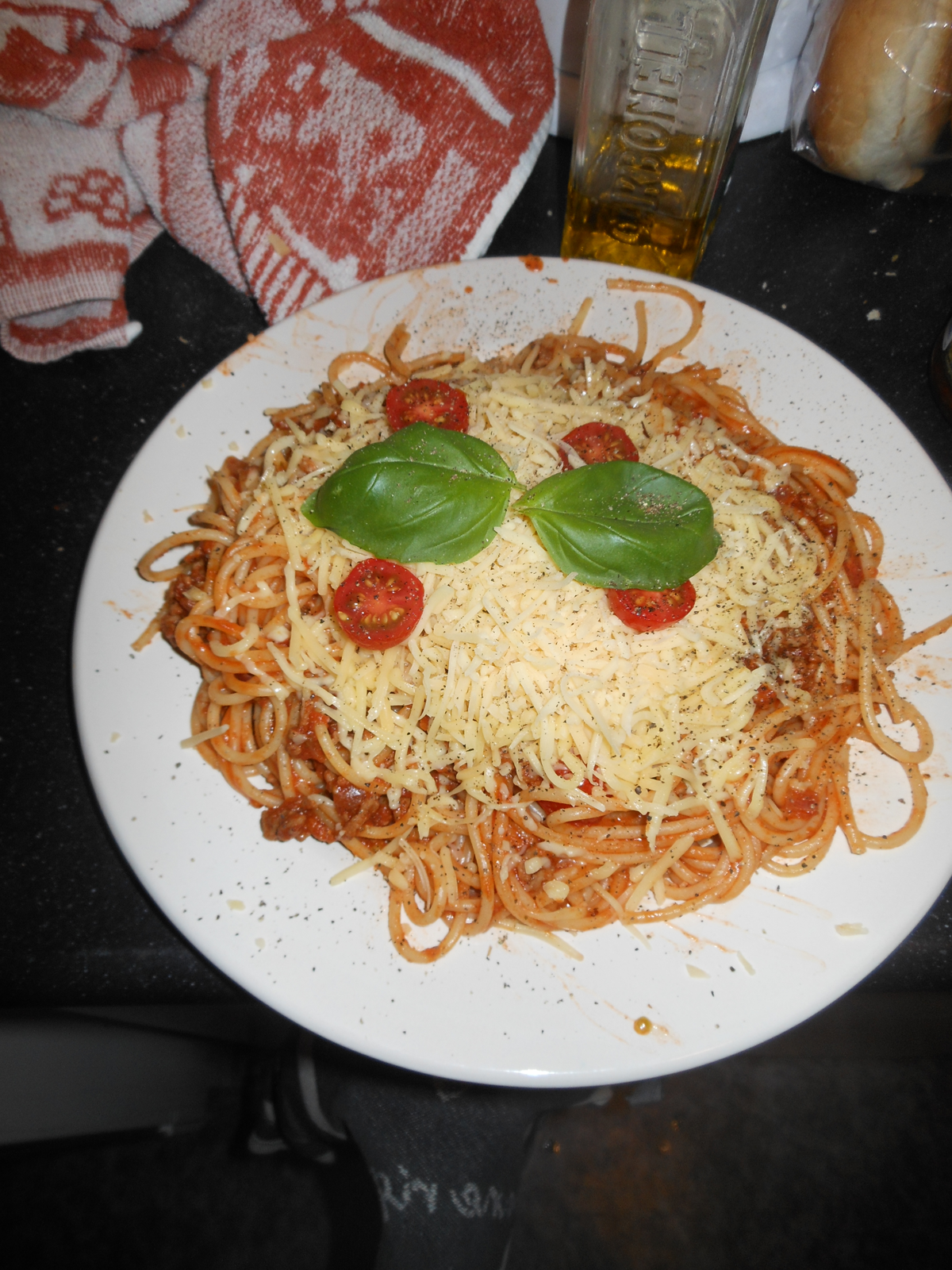