This post will detail the goings-on at the Circuit de Montmelo for the third day of the second week of testing, taking place on March 9th, 2017. If you want to know more detail about these pre-season tests, or want to know the importance of it, feel free to read this post first. For the recap and analysis of week 1, as well as the predictions I made for this second week, you can click here. For yesterday’s post detailing day 6, click here, while day 5 is available here.

9:00: As the sun is rising, the track is warming, and when the clock hits 9 o’clock, Palmer is the first to head out once the lights turn green. He’s immediately followed by Ocon and Vettel, whose engineers have fixed the damage sustained by Raikkonen’s crash yesterday overnight. Hamilton is, however, the first to register a time (1:28.394) but immediately improves to a 1:21.011. One lap later, he is already down to 1:20.686, just twelve minutes into the session. The rest is taking it a tad slower, with Vettel on softs registering a 1:22.968 as his first lap. Hamilton continues setting faster lap times, inching closer to the 1m20s barrier already, but ending on a 1:20.626.

10:00: The start of the second hour is Ricciardo’s, as he’s consistently improving for about 15 minutes. His 1:21.550 takes him to second on the board, but still almost a second off from the Mercedes. Talking about Hamilton, he is doing long runs on the medium compound tire. Ricciardo goes back out on fresh tires, registering a 1:20.824, leaving just two tenths between him and Hamilton. Stroll is currently the leader in the mileage department, having run 36 laps in 107 minutes. 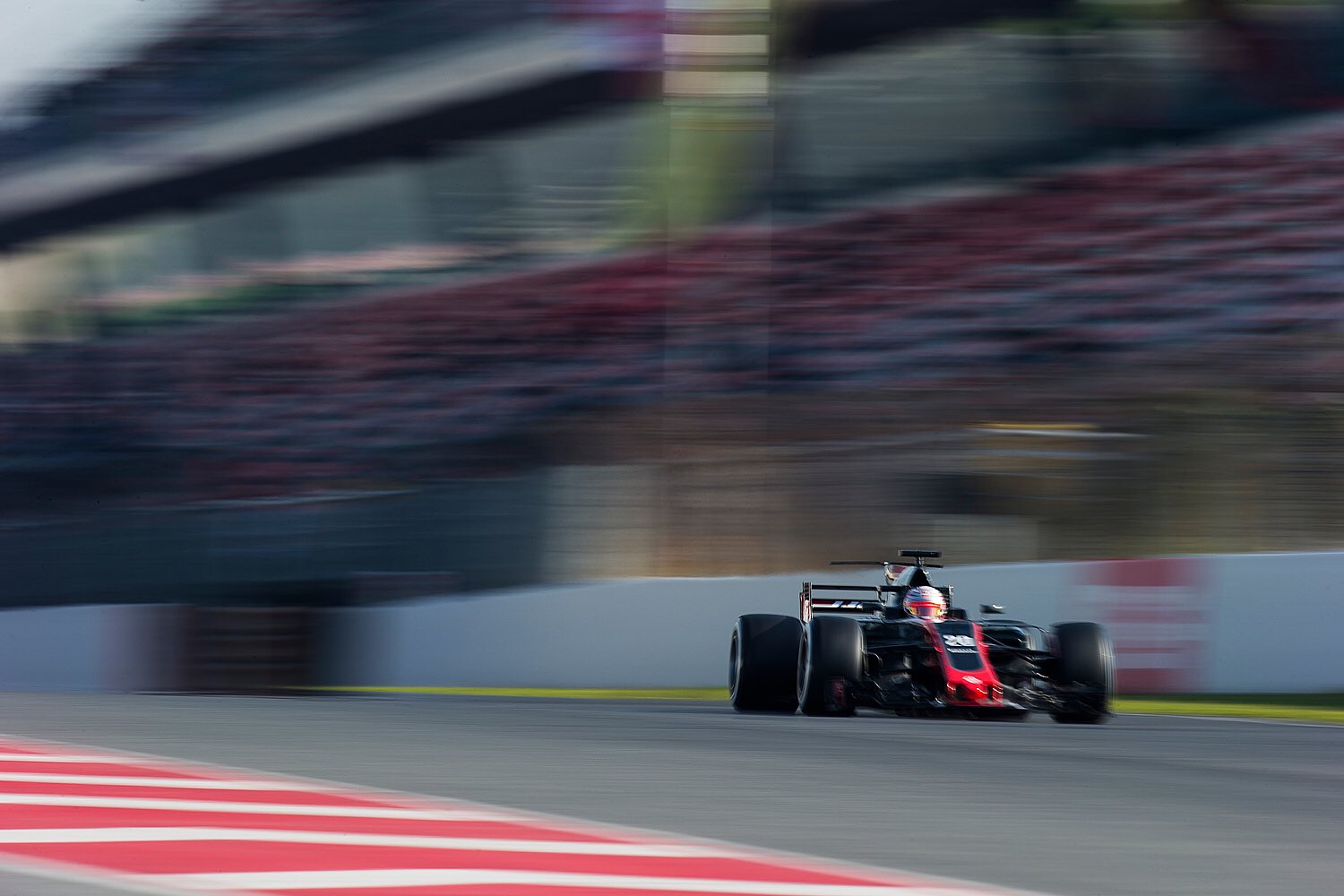 11:00: Stoffel Pantoffel is also out driving his McLaren, and his 1:22.055 is roughly a second better than Alonso’s best time yesterday (1:23.041). Apparently, the McLaren mechanics have found some confidence in the Honda power unit. Stroll shows he can be a reliable driver, as he crosses the 50 lap mark 130 minutes in. His times are, relative to Massa’s in the past two days, conservative at best. Whose lap times are not conservative, is Vettel’s. On the regular soft tire (Ferrari still seems allergic to anything softer) he goes fastest in a whopping 1:19.341 – just .031s off Bottas’ fastest lap yesterday. Vandoorne makes a run on ultra softs and records a 1:21.671, which is the fastest time the McLaren has set the past couple of weeks.

12:00: With just an hour to go, Ocon (who is already on 77 laps) records a 1:20.161, also the fastest lap ever for Force India on the Barcelona track. Vettel does another quick lap but lifts before hitting the finish line. Still his lap time is 1:19.314, just .004s down on Bottas yesterday. What is even more remarkable though, is the fact that Vettel did that lap on the super soft tire – proving my theory that Ferrari is allergic to soft rubber wrong in the process. A couple of minutes later, another theory of mine is blasted to smithereens. Vandoorne stops his car with another engine failure on track, meaning the first red flag of the day is flown just over three hours into this morning session. It does not matter if you love or hate McLaren, the sound the Honda engine made when dying is like your fingers applied to a cheesegrate. With half an hour left, Vettel goes out on ultra softs (yes, really) and breaks Bottas’ record time: 1:19.164. He’s not done quite yet, as he improves again to a 1:19.024. The annoying thing though: he’s still lifting the throttle on the straight. McLaren seem to have fixed Vandoorne’s problem as he heads out again with five minutes on the clock, but two minutes later another red flag marks the end of the session as the MCL32 screeches to a halt.

14:00: Kvyat is the first to head out after 13 minutes of nothingness. Massa, Bottas and Wehrlein take over from their respective teammates, setting some conservative laps on the board. Our record breaker of the day, Vettel, heads back out but is preparing to do long runs. I predict we won’t see any more improvements on his time today. Other drivers don’t seem to keen on trying to overtake Vettel on the board today, as everyone who exits the pits appears to prepare for long runs.

15:00: As even the top teams are driving lap times between 1:23 and 1:25s, not much is happening. Around 15:30 though, a red flag is caused by Kvyat parking his car at the exit of turn 5. Just over ten minutes later, the car is recovered and the session resumes. Still, nobody seems too keen on setting fast times, as Sauber hits a combined 100 laps today as Wehrlein completes his 12th. Bottas sets a 1:21.819 and is the first to go under 1m22s in a long time, but as we know, his time is nothing special. 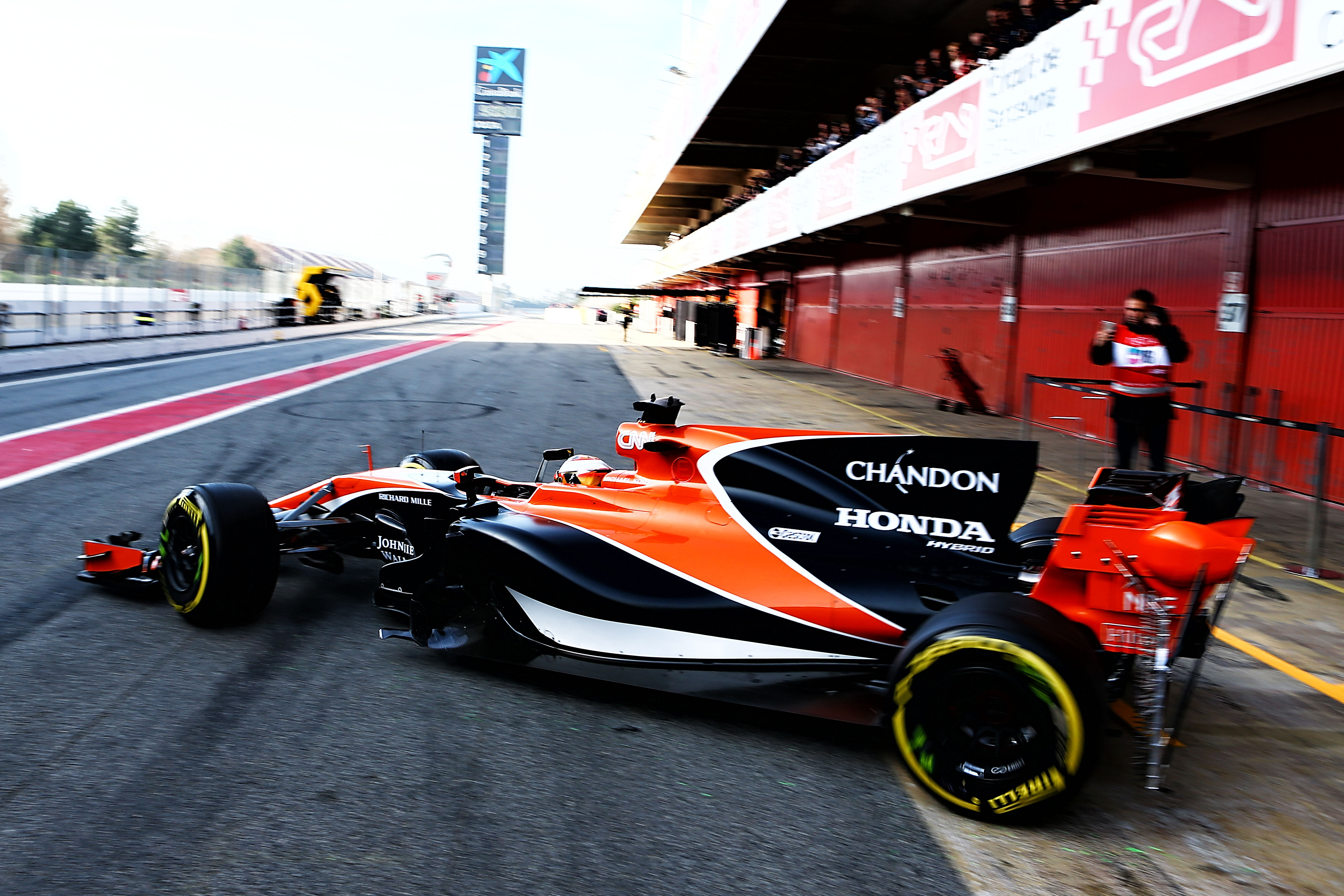 16:00: The start of the final two hours today means the return of Vandoorne, the Belgian in the Dutch-themed British car. Again, his mechanics seem confident the car will hold after the two red flags it caused this morning, which were stated to be an electrical problem. This is soon followed by a red flag, which is (surprise!) not caused by the McLaren this time. It’s actually Palmer at the run off in Turn 10 this time. 13 minutes later and it’s green again.

17:00: Toro Rosso plan to have Kvyat out shortly, as he hadn’t been on track since causing the red flag two hours ago. Vandoorne is out again in his McLaren which I reckon by this point is held together by duct tape. As the drivers drive in circles, it gets quite boring on track. They are quietly raking up more laps at an unremarkable pace. With just fifteen minutes to go, one by one the drivers head back into the pits tying a quiet end to this seventh day of testing. 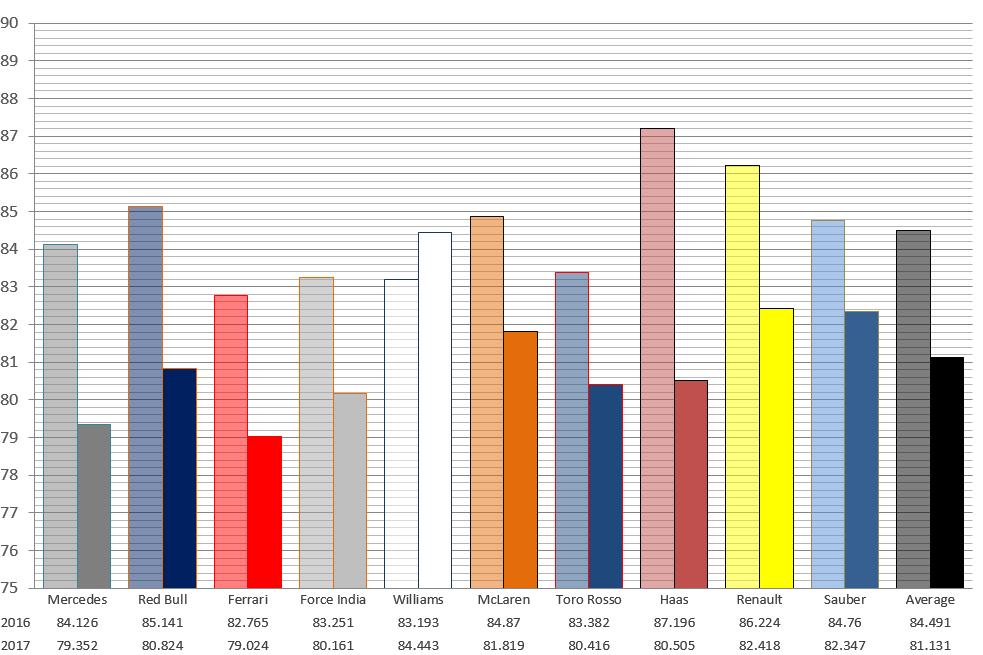 How can you start with an analysis, and not start out with Vettel/Ferrari today. The annoying thing is: we know he can go faster than this, but not by how much. Yesterday, I said we could expect a 1:18.9XX today, and I was mightily close. Hamilton’s 1:19.352 is nothing to scoff at, but his time is overshadowed by Vettel today. Still, I’m not getting my hopes up about Ferrari’s pace. Last year, they equally showed such an advantage to their nearest competitors, and we know how that turned out.

Red Bull had a good day today with Ricciardo putting in the most laps Red Bull has done all testing, 128. Their sandbags are still on the car, but Force India might have taken a few off today. Ocon set a particularly good time today, but they did so last year as well. Still, I predict they will run comfortably in midfield, but perhaps less so than last year. Williams had a dreadful pace today, but we know they can do a lot better than this. I’m just mad that they ran so slowly since I predicted today’s average to be below 81 seconds, which it would’ve been if Williams had driven a sensible 1:20.

Toro Rosso had a pretty good day today, Kvyat’s fourth place shows they will be able to be right up there with Force India, Haas and Renault. I still think Williams will be dead set on 4th in the WCC behind the Mercs, Ferrari’s and Red Bull’s, but the battle for fifth becomes ever more widened.

As for one team who will probably not be able to battle for 5th in the WCC, McLaren, again, fail to show reliability. While the problems today were relatively quickly fixed, the quantity of problems prevented them, as always, from running more than 50 laps. While the teams that would have been their competitors last year are driving 100+ laps and setting times in the 1:20s, McLaren is stuck at a best time of 1:21.819. I’m just happy I’m not a McLaren or Alonso fan. 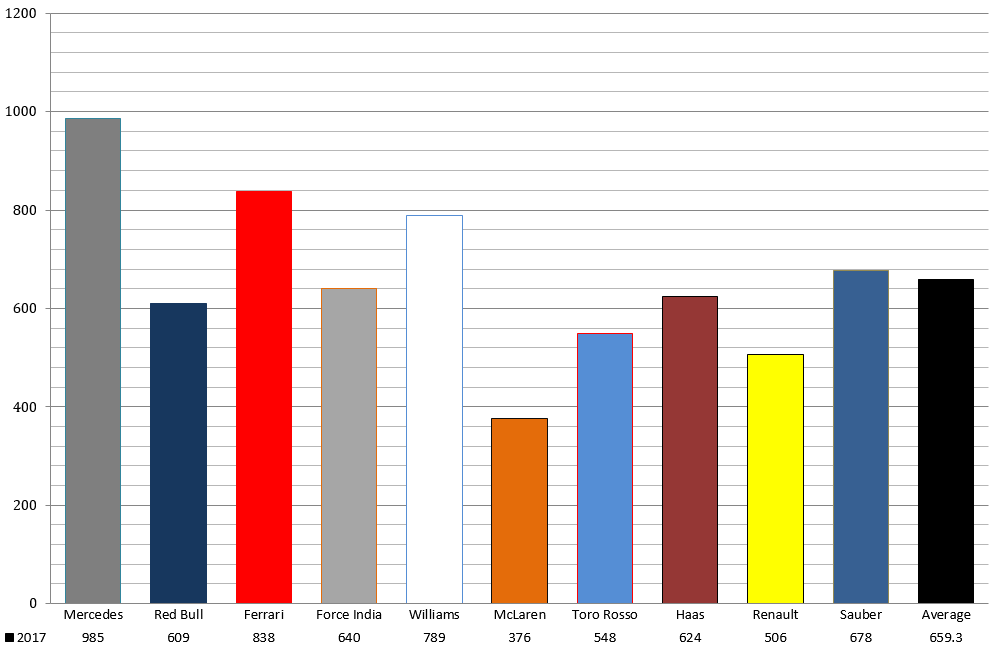 After yesterday’s crash, Ferrari has taken a nibble at Mercedes’ mileage lead, but their advantage will not be taken away from them on the final day tomorrow. Williams had the most laps today, nine more than Ferrari’s 155. Ocon set a very respectable 137 laps on the board bringing them closer to Sauber, as Wehrlein did only 44 while Ericsson drove 88 laps today. Toro Rosso and Renault are still behind and will remain so, but the absolute dreadful mileage of McLaren means they are almost 300 laps down on the average lap count, 314 laps if you remove McLaren from the average. As McLaren struck a 10-year contract with Honda, I’m sure they are frantically trying to renegotiate the deal right now. 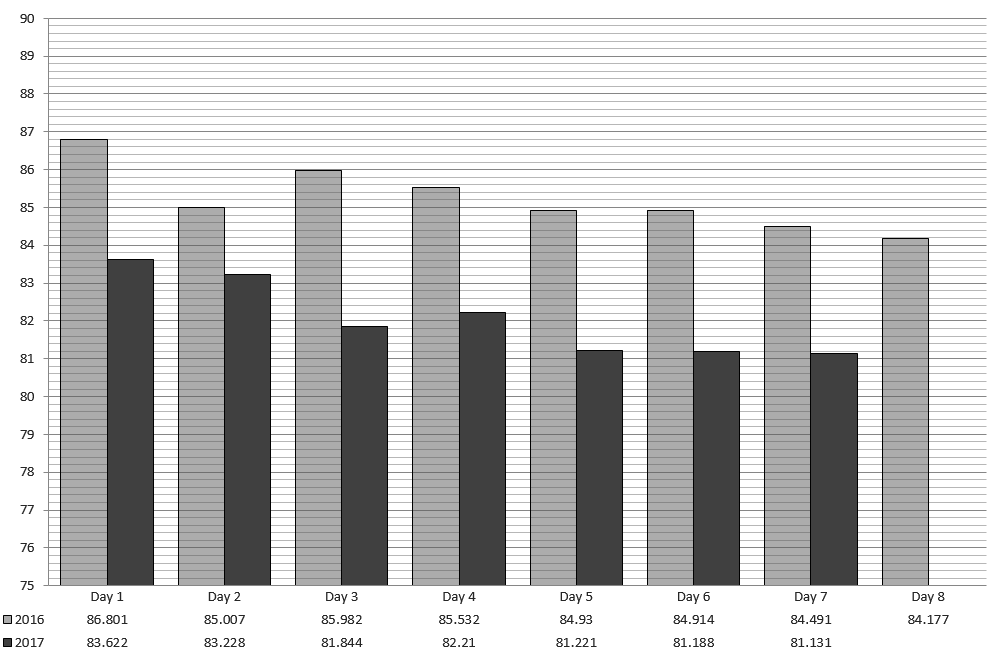 As I predicted yesterday, today again saw a slightly faster average lap time but not by the amount I predicted – thanks to Claire Williams. Lets hope tomorrow will see them return to their normal pace, and we can have an average time of 80.8s. Yes, that is my prediction. As far as individual times go, I do think we will finally break the 1m19s barrier, and I think it will be Bottas to do it first, and Hamilton second – demoralizing the competition ahead of Australia.

Thanks for reading again today, I will be back tomorrow for another recap, this time for day 7; the second-to-last day of testing. If you’d like to support me writing this blog, why not share it, or like my page on facebook or follow me on twitter, or consider whitelisting me from your adblock! See you tomorrow!