As the 2017 Formula 1 season draws near, many fans flock to F1-related pages in order to keep up with the latest developments as teams test their new cars before the season starts officially on March 24th, 12:00h local time in Melbourne, Australia – when the lights for the first free practice session of the Australian Grand Prix turn green. In these series of posts, I will transcribe the most important stuff happening on track on an hourly basis, and follow it up with an analysis based on 2016 testing results.

This post will detail the goings-on at the Circuit de Montmelo for already the  third day of testing, on March 1st, 2017. If you want to know more detail about these pre-season tests, or want to know the importance of it, feel free to read this post first. For the recap and analysis of day 1, you can click here. Day 2 can be found here.

9:00: As the lights turn green to mark the beginning of the third day of testing, Ericsson is the first to leave the pits, followed by Kvyat and Bottas, who gets to do the morning session today. Others follow suit, including Palmer and Alfonso Celis Jr. who is Force India’s third driver. The first red flag of the day is caused 26 minutes in as Palmer spins his Renault into the gravel turning into turn 3, providing us with excellent on board video footage. Sixteen minutes later, the track is cleared and Ericsson is, again, the first to head out. Grosjean makes his debut in the new Haas VF-17. Meanwhile, Bottas is the first to put in some serious lap times, clocking 1:22.816 on the Super Soft. Vettel, running the medium tire, drives a nice 1:22.222 just before the hour is over.

10:00: Bottas, having traded in his Super Soft tires for the regular Soft tires, nabs P1 by clocking in at 1:21.632, while Stroll enters the track gets a chance to redeem himself having spun yesterday, damaging his car. Vettel, still on mediums, reconquers the lead by edging Bottas’ time to a 1:21.609. Palmer is able to leave the pits again, as there wasn’t any terminal damage following his spin. The Ferrari and Mercedes continue to battle for first as Bottas bites a chunk out of Vettel’s time posting a 1:21.099 on softs. Meanwhile, McLaren seem to have a relatively problem-free day compared to yesterday as Alonso continues to put in laps, cruising to a decent 1:23.956. 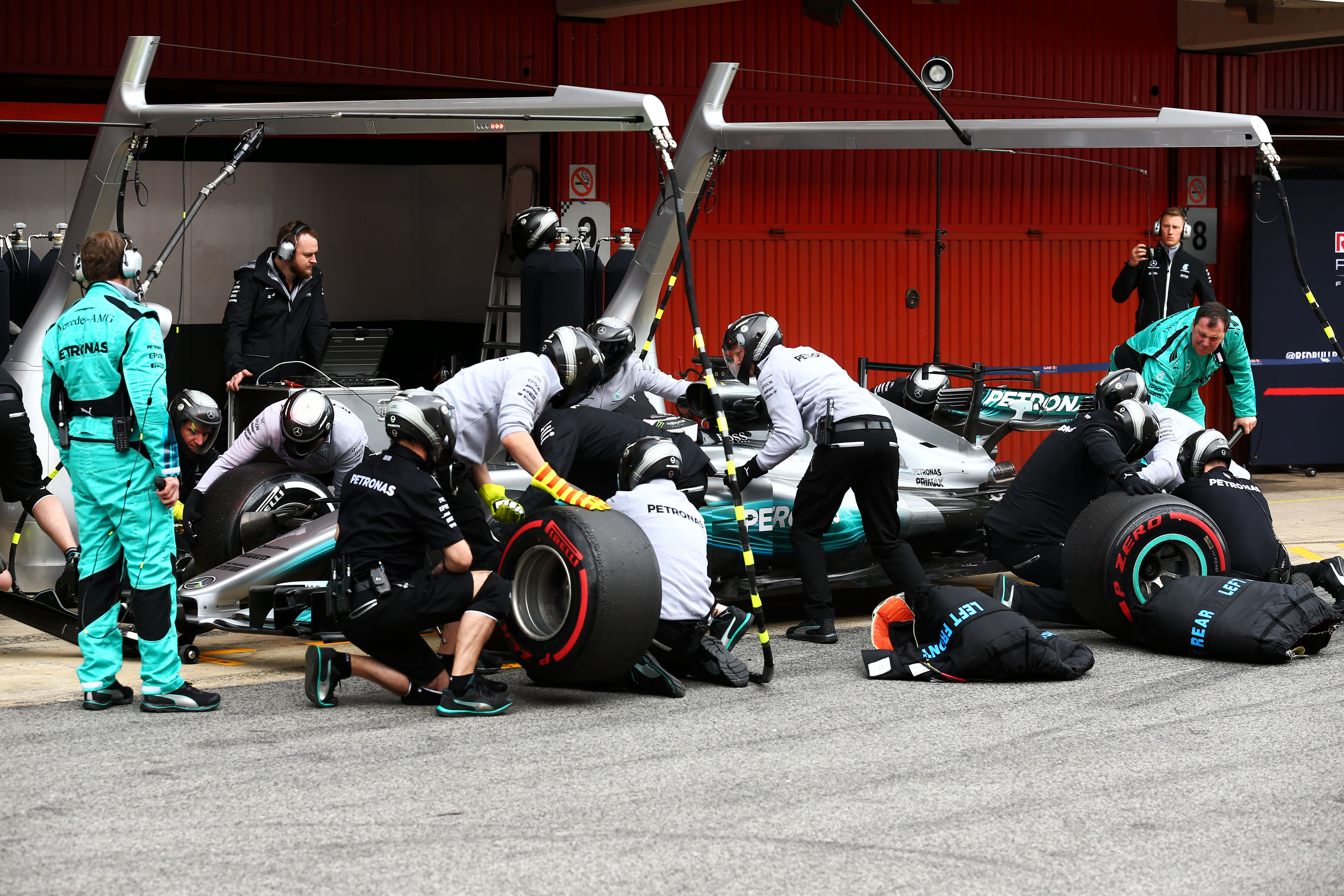 11:00: Grosjean posts his first lap time, meaning that all 10 cars have now set a timed lap. It is actually the first time all teams post a time in the first half of the day, as McLaren missed out on day one, and both Renault and Sauber did on day two. Progress! Talking of progress, Ericsson drives his Sauber to a 1:22.636, which is a full two seconds faster than anything they recorded previously. It is still someway off the pace of the leaders, as Bottas records a screamer: 1:20.107, which is .8s faster than anything we’ve seen before. He heads back into the garage, exchanges his softs for super softs, and does another run. This time, he goes even faster recording a 1:19.838, clearing the 1:20 threshold and being 2.062 seconds faster than Hamilton’s 2016 pole-time. I reckon we won’t see anything faster than that for a while. This will probably put an end to the musical chairs for P1 between him and Vettel.

12:00: With one hour to go in this morning session, others are out to improve their times as well. Ericsson sets a 1:21.824 on super softs, proving that Sauber does have some pace. Ricciardo takes his Red Bull to a 1:21.153, while Stroll records a 1:22.351. This is nothing compared to Bottas, however. He sets out on another run, this time on the softest of soft tires, the ultra soft, and is (as far as I know) the first to do so this year. He takes another tenth of his lap time, recording a 1:19.705. Fun fact, this is a quarter of a second faster than the fastest lap ever recorded in an official session on this track (a 1:19.954 set by Rubens Barichello during the 2009 qualifying session for the Spanish GP). The fastest ever time including non-official sessions is, however, a lap by Felipe Massa in ’08: 1:18.339. While Bottas returns to the garage after setting 75 laps, Stroll ends this morning session by once again spinning into the gravel as the checkered flag drops.

14:00: The start of the afternoon session means that Palmer, Bottas and Kvyat can go and hit the showers, they will be replaced by their teammates Hülkenberg, Hamilton and Sainz Jr. respectively. After fifteen minutes of no action at all, Ericsson is again the first to head out of the box, followed by Hamilton and the rest. Drivers are doing long stints and race simulations, not improving on their times in general, except for the few that took over from their teammates.

15:00: Vettel starts to gnaw at Bottas’ lead by setting a 1:20.572, and is the second one to dive under the 1m20s not long after, driving a 1:19.952 on soft tires – not even the ultra or super softs. Alonso does a run on ultra softs and records a 1:22.598 which would’ve turned heads yesterday, but with the knowledge of today… Not so much. Back to Vettel, as he becomes the first one to pass the 100 lap mark today, right before the hour is over. 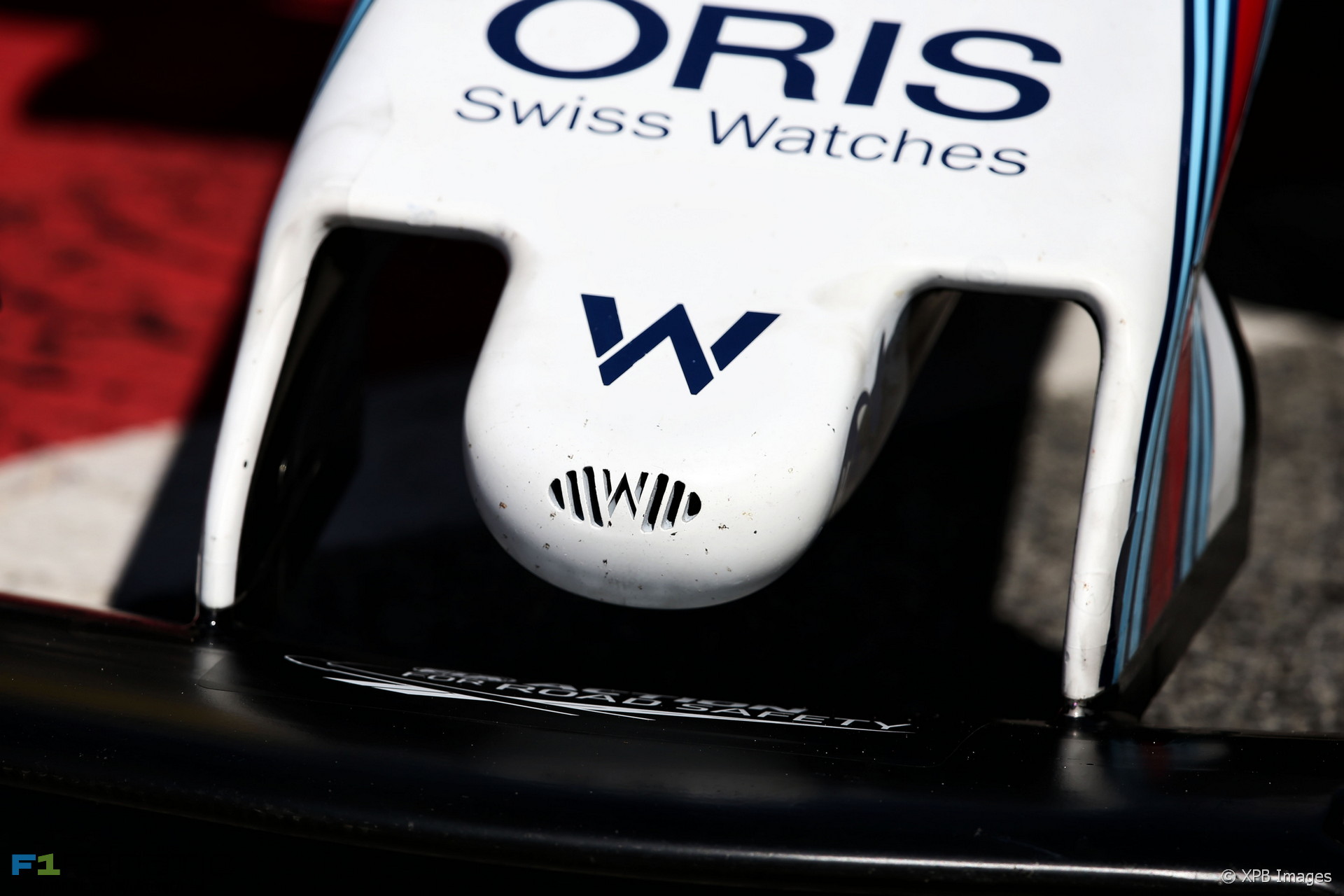 16:00: This hour is kicked off by a red flag, caused by Sainz Jr. getting stuck in the gravel. The car is recovered, and ten minutes later green is shown again. Three minutes later, however, there is another red flag. This time, it is Stroll – again. While on his 99th lap of the day, he has spun and clipped the inside wall, breaking his front wing in the process. That’s his third incident in about eight hours of partaking in pre-season testing. This incident, just like the first, means that Stroll will not be able to continue. Meanwhile, McLaren seem to have a problem-free day today at last, as they are slowly raking up their lap count.

17:00: The final hour starts off with just Hamilton on track, but he’s done 75 laps in about three hours time. Red Bull is out with an exhaust issue. Vettel is still on track, but just as he comes onto the finish straight, his car stops. After having driven 139 laps today, it seems his car just couldn’t keep up with it anymore. No need to panic, as this is the first time Ferrari has run into an issue. He does cause a red flag, which is lifted with five minutes on the clock. In these last five minutes, however, the track remains silent as the checkered flag falls to close out day three.

To compare these results like we did yesterday and the day before, we need to take the weather into account. In 2016, the second day of testing was held on February 24th. At that time, it was a sunny day peaking at 16 degrees Celsius in Barcelona, with mild winds reaching 24km/h. Today, temperatures reached 17 degrees, with wind speeds up to 27km/h – remarkably similar to last year. Weather will, again, not play a deciding factor in any large differences in times. So, let’s look at the differences in lap times on day 3 between this test, and last year’s. 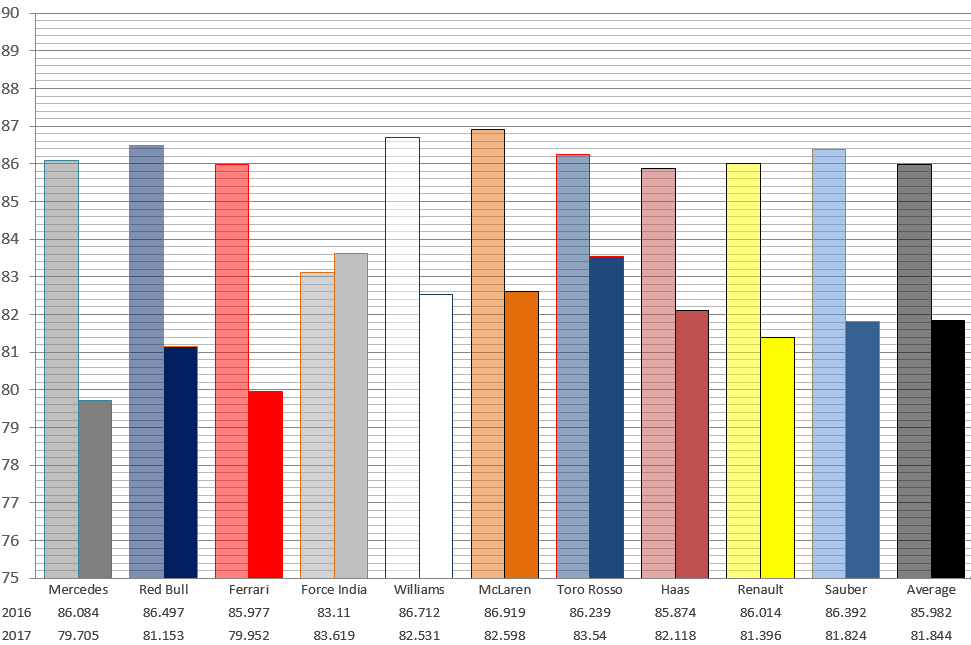 Yesterday, I predicted not too much fireworks for today, as teams would do race sims and long stints. Well, I was partially right. I was wrong about the lack of fireworks though, as both Mercedes and Ferrari broke through the 1m20s barrier. Both were six seconds faster than they were last year, and over a second faster than yesterday. Overall, the average lap time went down from 83.228 yesterday, to 81.844 today – something I predicted for yesterday, but did not happen.

Mercedes ground breaking 167 laps yesterday were eclipsed by two today, they got another 169 laps to add to their tally. And, as far as I know, they haven’t had a single mechanical failure. This is getting scary at this point. The only redeeming factor is that Ferrari drove their fastest time on normal soft tires, while Bottas used ultra’s. Red Bull didn’t have the best of days, but are still within sight of the two teams heading the boards at the moment.

Encouragingly, Renault and Sauber proved today that they do have some horsepowers packed under their engine covers. Renault even came close to beating their more succesful sibling Red Bull. Alonso’s 1:22.598 is decent, but if you take into account the fact that he drove said lap on ultra soft tires, I wouldn’t want to be a McLaren fan right now. At least they did not run into any mechanical trouble today, as Alonso could more than double their total lap count. Up until today, they had 68 laps under their belt, while Alonso could do 72 laps today. They are still someway behind the other mid-field cars in terms of lap count as the graph below shows. 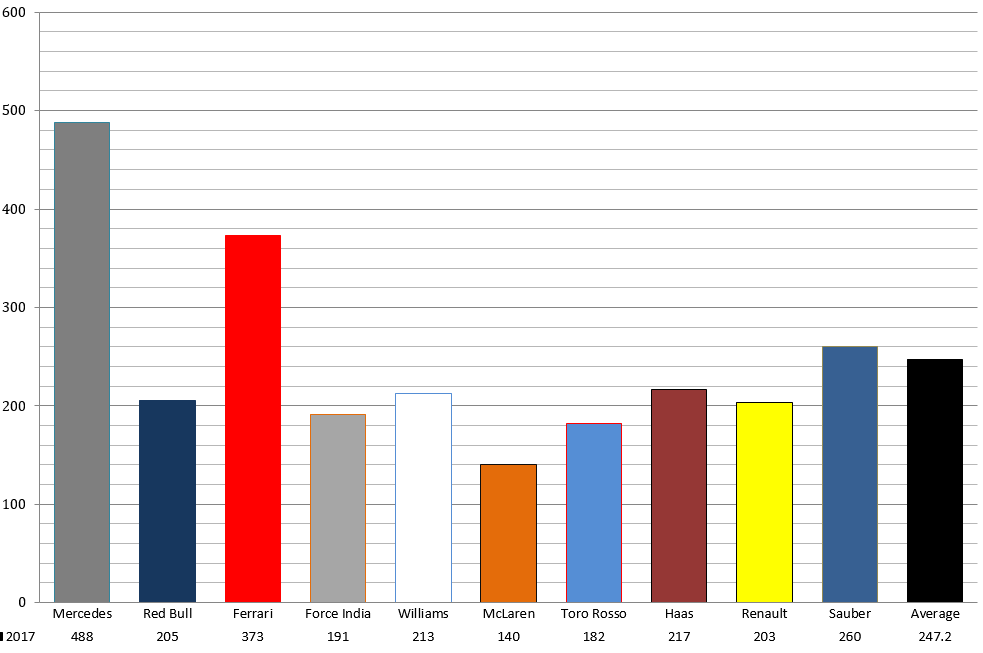 Mercedes and Ferrari are well clear of the competition in terms of laps tested, while Mercedes themselves are well ahead of Ferrari. They skew the average lap count so much, there is only one other team that has driven an above average amount of laps: Sauber. Ericsson really showed the Sauber can be reliable today, as his driving today accounted for nearly 50% (47%) of their current total.

Tomorrow will mark the fourth and last day of testing. Tomorrow will be at least partly spent at simulating wet weather conditions, so Pirelli can get some much-needed data on their new wet weather tires and intermediates. I suggest Williams keep Stroll backstage, as he has enough problems keeping the car on the road as is. The last graph I will show you below, shows that just one bar is missing. It won’t be, tomorrow evening around the same time. 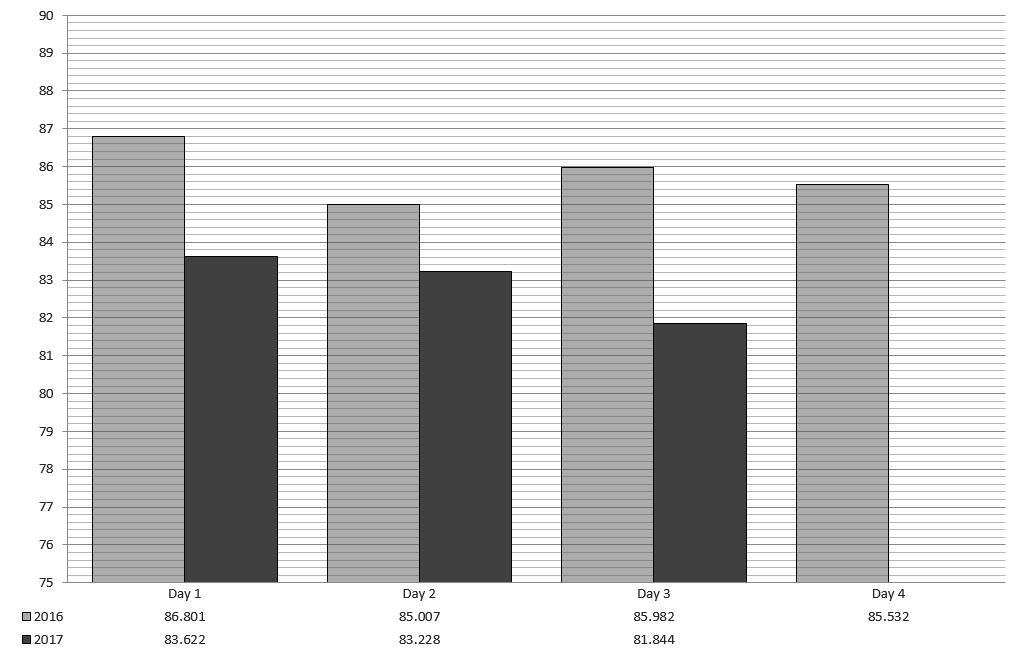 I hope you enjoyed reading this as much as I enjoyed writing this. Stay tuned for the fourth and last wrap-up and analysis tomorrow, which will be live approximately one hour after the checkered flag drops (19:00CET). Saturday I will post a large write-up consisting of all data gathered through these tests, so I hope to at least meet you here again on saturday! In the meantime, to support me writing this blog, why not share it on facebook or twitter, or consider whitelisting me from your adblock (I have one ad positioned in the sidebar). You can also give me an upvote in the reddit thread, which helps with the exposure on /r/Formula1!