This post will detail the goings-on at the Circuit de Montmelo for the final day of the second week of testing, taking place on March 10th, 2017. If you want to know more detail about these pre-season tests, or want to know the importance of it, feel free to read this post first. For the recap and analysis of week 1, as well as the predictions I made for this second week, you can click here. Yesterday’s post can be found here, while the post detailing day 6 you can click here, while day 5 is available here.

9:00: Grosjean and Ericsson are quickest out of their respective Haas and Sauber garages, soon followed by Sainz, Raikkonen, Alonso and Stroll. Bottas heads straight for a fast lap, culminating in a 1:22.809. Two days ago, when Bottas was also the first to set a competitive lap, he opened with a 1:21.229, but he takes it relatively slow today. While Raikkonen and Perez are lapping on unmarked tires [ed. note: can anybody explain to me what the deal is with those?], Stroll is doing long stints on soft tires reaching twenty laps in the first hour.

10:00: Hülkenberg, on his ultra soft tires, sets the first competitive time of the day: 1:20.248, which is also a new record for Renault.  Their previous best was a 1:21.213 by Hülkenberg on super softs on day 6. If the other variables are comparable, we could say that the ultra’s have a second advantage over the super’s – but we don’t know the other variables. Half an hour into the second hour the first red flag is caused by Grosjean, who spun his Haas entering turn 5. Not long after the light turns green again and Verstappen (on his first timed lap of the day) improves his personal best time to a 1:20.221 driven on softs, .027s faster than Hülkenberg but slower than his teammate on day 5 (1:19.900). The Hulk is quick to react though, as he drives a 1:19.885 not a minute later on the ultra soft compound. Stroll goes third with a 1:20.335, which is also a personal best for him – but not for Williams as Massa drove a 1:19.726 on day 5. 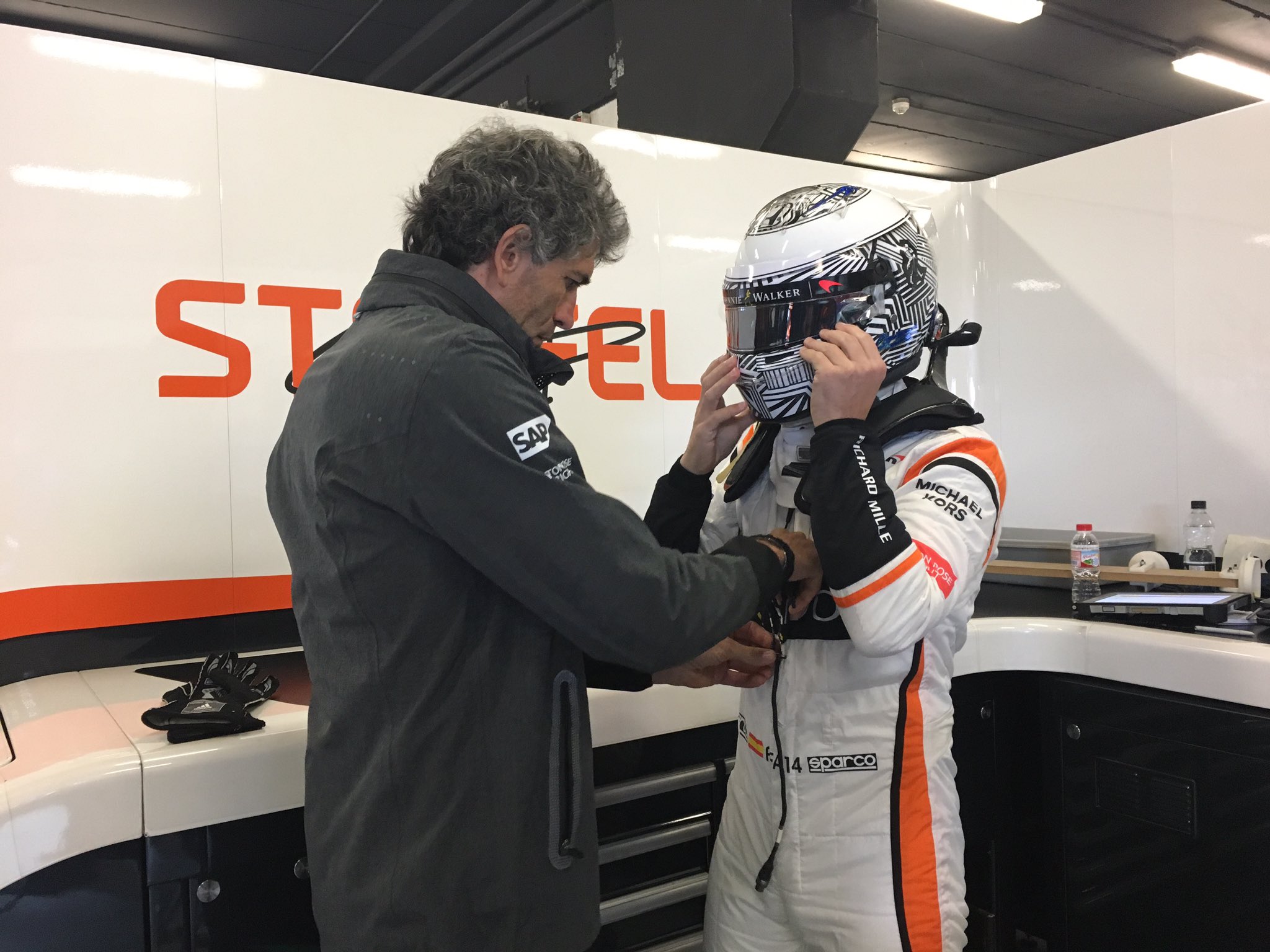 11:00:  Verstappen improves his time – again on softs – to a 1:20.110. Bottas completes his 15th lap, meaning that Mercedes have now driven over a 1000 laps in total. Meanwhile, Alonso does what the McLaren does best: cause a red flag. Experiencing the same electronic issue Vandoorne had yesterday, he stops his car on the straight following turn 7. When the track is cleared of the black/orange trashcan [ed: get it? Because there’s garbage under the lid!], Verstappen improves again. This time, a 1:19.852, ensures him the top of the chart (for the time being, at least), and breaking Ricciardo’s best time in the RB13. His time was driven on softs, but he pits for super softs, goes back out again, and drives a 1:19.491. Apparently, McLaren got their car working again, because Alonso made it until turn 4 before causing his second red of the day. This must be some kind of record.

12:00: Raikkonen opens the final hour of the morning session with a bang, improving on Verstappen’s time with a 1:19.267 on the regular soft tire – just a quarter of a second slower than Vettel on the ultra soft yesterday. He pits, switches to the super softs, and drives a 1:19.019, beating Vettel by .005s. He pits again for a new set of super softs, but this time the chrono marks 1:18.634, finally breaking the 1m19s barrier which I predicted would happen yesterday but predicted again for today after it didn’t happen. Just in time as well, as Grosjean makes sure the third red flag of the day happens before lunch, after which nothing of substance happens.

14:00: Perez is the first to head out, extending his lunch break by 12 minutes, but quickly heads back in. Another 15 minutes later, he heads back out again, followed by Stroll and Wehrlein 10 minutes later. Hamilton makes his first appearance of the day as well, clocking in at 1:21.020, before heading back in. This first hour is unusually quiet, perhaps teams are already tearing down their equipment to pack for Australia.

15:00: Hamilton improves by three tenths, while Palmer also makes his first appearance today. They are joined by Raikkonen and Grosjean on track. Race simulations are what are being driven right now, so the individual lap times reflect this. 90 minutes in and the Red Bull of Verstappen is still missing, while Alonso tries for a third time to keep the duct tape on his engine intact. As Raikkonen completes race distance, Stroll is already nearly halfway his second with 92 laps to his name, while Alonso goes back into the pits with just 25 laps today. At least he gets there on his own. 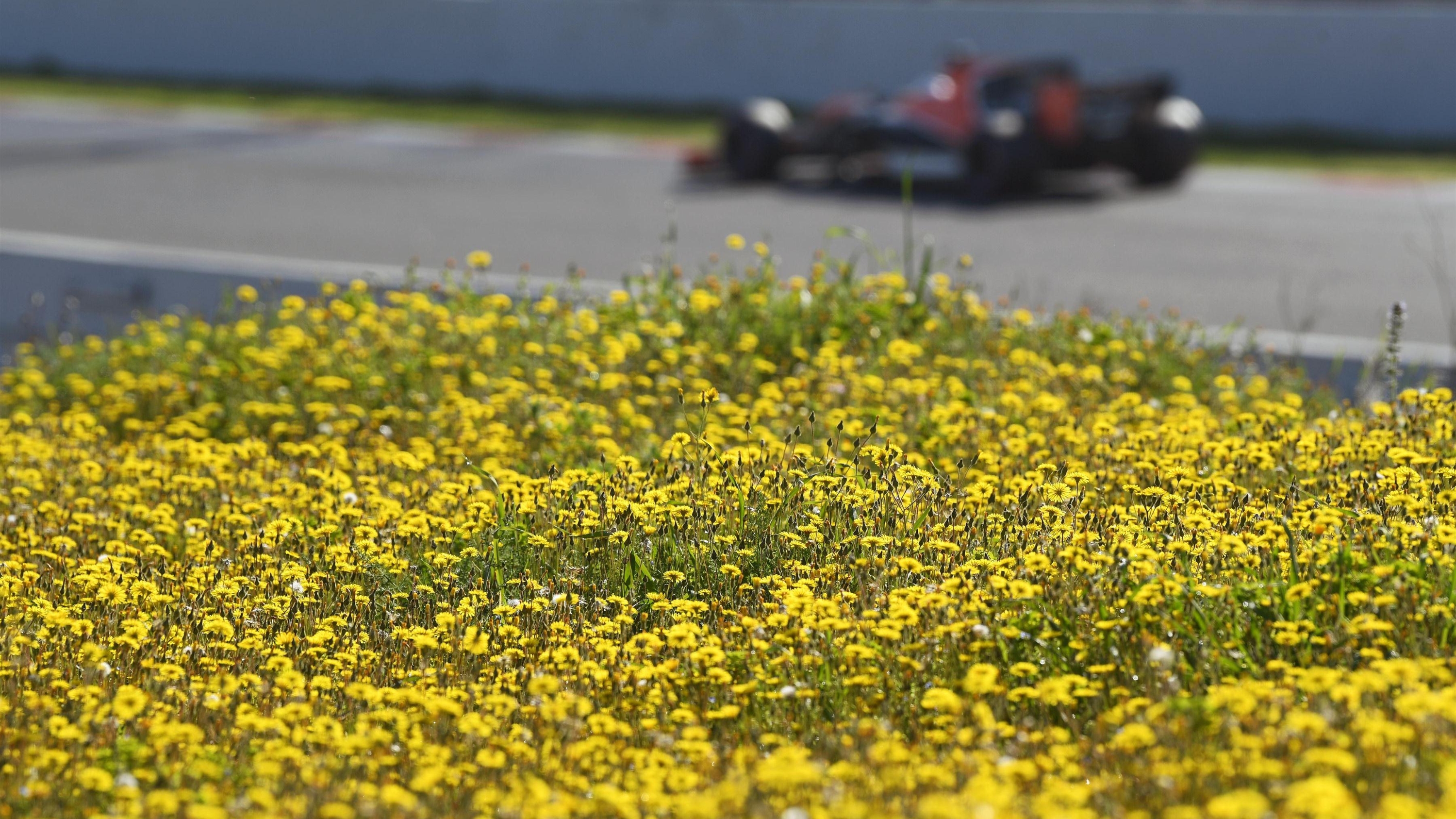 16:00: But, Alonso quickly moves out of the garage again to add some more distance to McLaren’s dreadful tally. He is joined by his countryman Sainz and former teammate Raikkonen. As Stroll passes the 100 lap barrier, the latter of the aforementioned two ends up facing the wrong way in the final chicane, meaning the fourth red flag of the day is a fact.

17:00: Palmer sets a competitive lap time as soon as the green flag is shown, a 1:20.205 on super soft rubber. Alonso finally dives into the 1:21’s with a 1:21.811, while Hamilton goes up to fifth with a 1:19.850. Eight minutes into the final hour of testing, the fifth red flag of the day is brought on as Sainz Jr. parks his Toro Rosso at the end of start/finish straight. With just 40 minutes to go, a race to the finish ensues – for McLaren at least, desperately trying to put in laps. Alonso improves to a 1:21.389, McLaren’s fastest time in testing. Even Raikkonen rejoins the track after his little spin, while Perez needs a push to his pit box with just five minutes to go. Not long after, the checkered flag is waved for a final time in Barcelona, marking the end of testing. 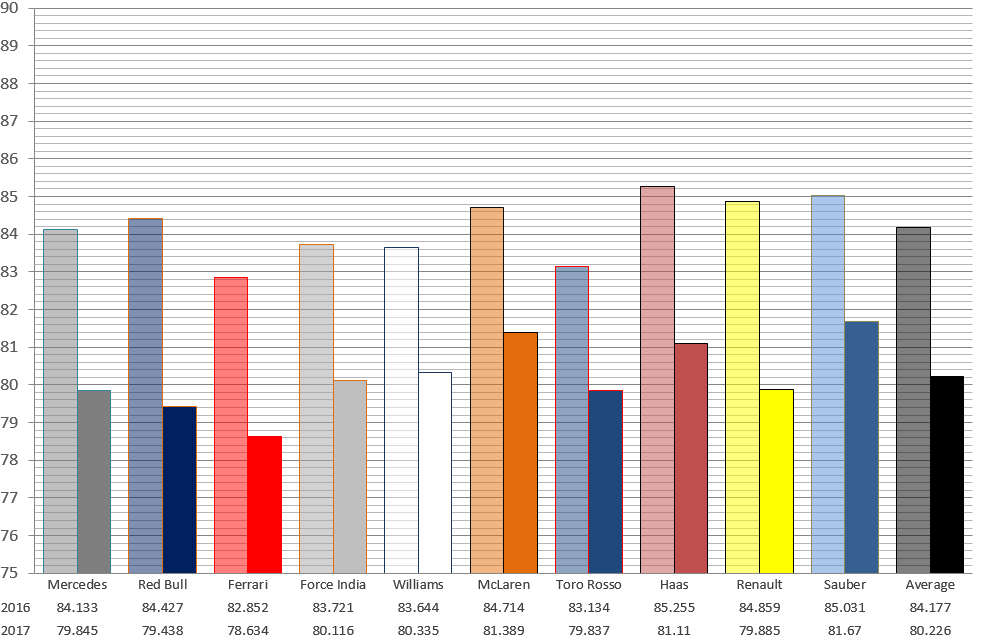 Yesterday, I predicted Mercedes would be the ones to break the 1m19s barrier. I was wrong. It was actually Ferrari, but I’m sure Mercedes would be more than capable to do so. They must read my blog and want me to make a fool of myself. Anyway, the barrier has been broken, and not by a small margin. Unfortunately, the absolute lap record by Massa in 2008 (1:18.339) wasn’t broken today, but it will be come Barcelona qualifying. Last year, the fastest time in testing was a 1:22.765 driven by Raikkonen on day 7, but the pole time during qualifying was a 1:22.000. I am confident pole time will be a high 1:17 on May 13th.

Mercedes’ sandbagging was predicted, but is still frustrating. Red Bull finally showed they are still top 3 at least, which I did expect in advance of testing. Renault was, in my opinion, the surprise of today. Not the team, but the engine. All three teams running Renault engines ran sub 1m20s today, for Toro Rosso and Renault (the team) it was their first time. With the expected engine upgrade coming ahead of the Spanish Grand Prix, they have a lot of potential. I still think Williams will earn 4th in the WCC, but it is comforting to know that Stroll showed decent pace today while not making any errors.

With Ferrari’s pace, I don’t think we have seen the full potential of Haas yet. Just like last year, they were at the bottom half in testing, but in the top half in the Australian Grand Prix. Sauber, with the 2016-spec engine, looks set to finish last in the WCC, unfortunately. Honda will eventually fix their engine problems, but I don’t expect this to happen until the second part of the season.

I’m getting a bit ahead of myself – the full analysis on testing and season preview will be posted (presumably) sunday. Instead, lets look at the mileage. 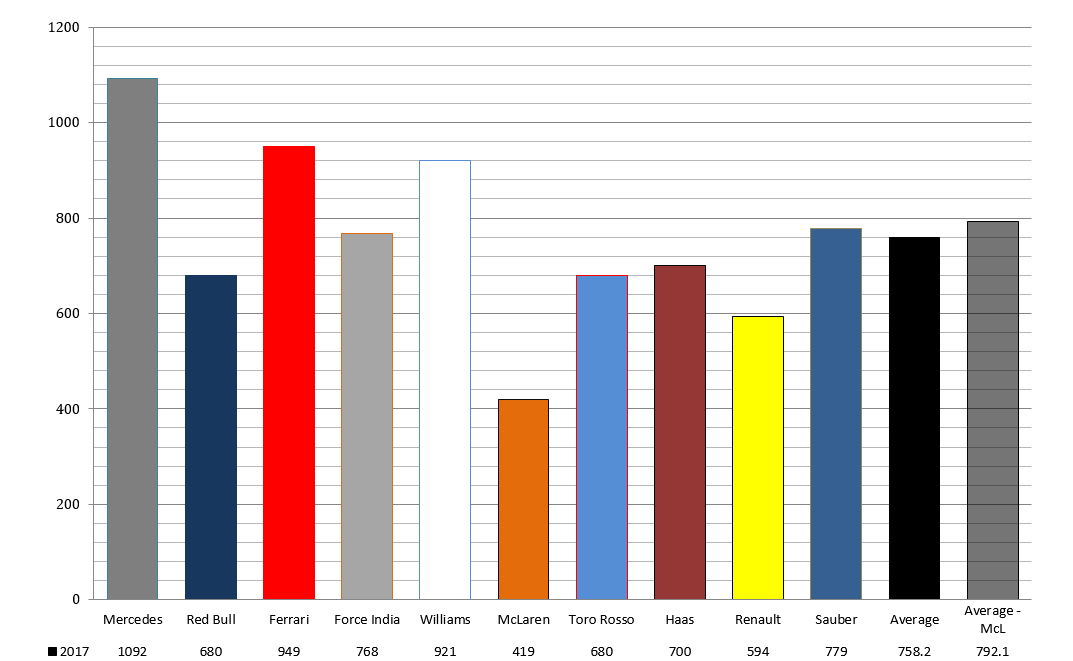 For today, I added another bar, the average with McLaren removed from the average (Average – McL). This shows exactly how much McLaren is behind on the competition. Their 419 laps is just 52.9% of what the other teams did on average. The top three, in terms of mileage, is clearly discernible: Mercedes, Ferrari, and Williams. I think we can call Williams the winner of this second week, after their dreadful first week (caused by Stroll’s many incidents) left them #8 in terms of mileage. While not exactly copying Massa’s lap times, Stroll made a remarkable recovery, which he can be proud of.

Toro Rosso was, in my opinion, the winner of today. Their 132 laps today put them on even count with their bigger brother. Their lap time today was also nothing to scoff at. They might have gone all out today, but even so, their result today was encouraging.

In terms of average pace over these days, lets look at the averages from 2016 and what we have now that the final day has run its course: 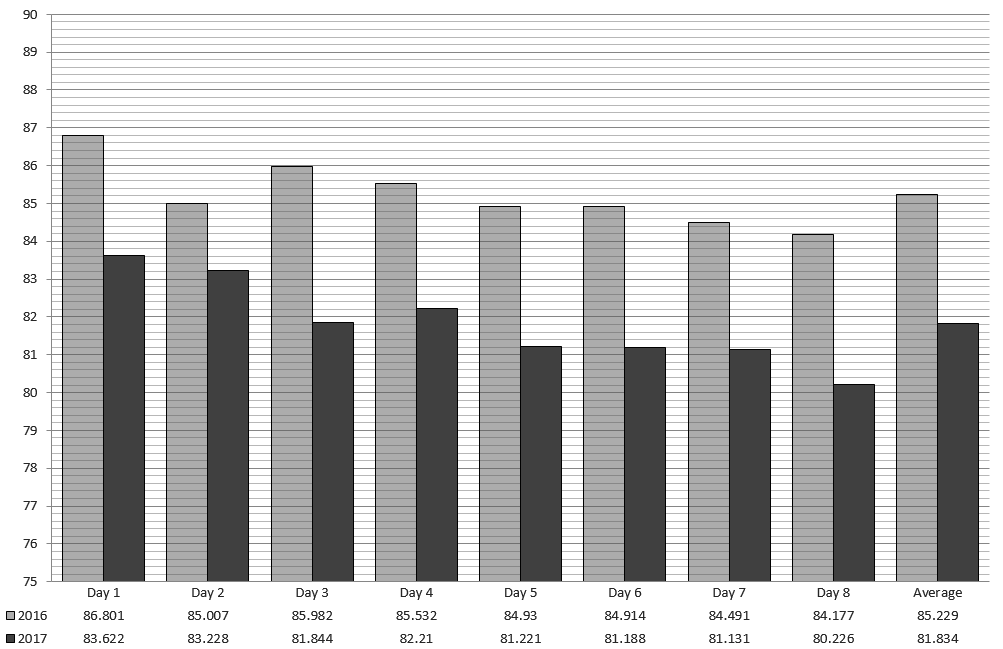 As there is no more testing to be done, there will be no more predictions. Well… not exactly. I will finish this post with a very bold prediction. This prediction, which you will see below, will be the final standing in the WCC in 2017. How I think this will come to fruition, you will read in my testing analysis and season preview post.

Want to discuss this on reddit? Show me your predictions for the WDC on reddit, I’m curious what you guys think.

That was it. It was a long ride, but a joyful one. At times, I felt my sanity was wavering, but I pulled through. Once again, thank you for reading. Stay tuned for a final post on these tests, which will in all likelihood go live this sunday. If you’d like to support me writing this blog, why not share it, or like my page on facebook or follow me on twitter, or consider whitelisting me from your adblock! See you (presumably) sunday!