The F1 Oracle – Predicting the results for GP #02: Shanghai, China

In this series of posts, which will be published the friday before each race weekend, I will attempt to predict the top 10 of both the qualifying session and the race ahead based on previous form and the individual performances in the first two free practice sessions on friday ahead of the weekend. I will enter these predictions on GuessTheGrid, a website which takes your top 10 predictions and ranks them against other’s. Feel free to sign up and battle me for the title of F1 Oracle – but first, read on what my prediction will be for the 2017 Chinese Grand Prix and why I think this prediction will ring true come sunday afternoon (local time).

Before I will present my prediction, let us take a look at how my prediction for the Australian Grand Prix worked out.

Overall, my prediction result was quite disappointing – though the result itself I found quite promising since Vettel broke my predicted Mercedes hegemony at the very first opportunity. In the picture above, the top (bright) name is the actual placing, and below shows my predicted result.  With the exception of Hulkenberg, I had at least all names right during qualification, though their places differed. The biggest reason for that is Ricciardo’s off at the start of the third session of qualifying, putting the back of his Red Bull in the wall.

Due to rain and a persistent fog (meaning the medical helicopter couldn’t land at the nearest hospital, a requirement for F1 to run a session), FP1 was cut short and FP2 was cancelled altogether. This means there is next to no meaningful data to base my prediction on. Instead, I will look at other factors, such as pre-season testing performance, Australian performance, the weather, and historical Chinese results relative to the Australian GP (2016).

On that last part, we see that especially Valtteri Bottas in his Williams and Sergio Perez in the Force India performed notably better in China 2016 related to Australia 2016. This shows me that this circuit slightly favors the Mercedes engine. This is not entirely surprising if you look at the track layout, and the one kilometer long back straight where top speed is essential. Red Bull’s Ricciardo however, was still close to Rosberg’s Mercedes, while the Ferrari of Kimi Raikkonen ran a close third.

As Ferrari seemingly closed the existing power gap to Mercedes, I reckon it will be close between the Ferrari’s and the Mercedes (possibly 2/4 and 1/3 respectively) for qualifying. Red Bull will be some way off in 5th and 6th, while I suspect Haas (both drivers), Williams (Massa) and Force India (Perez) to fill the final spots of the top 10 for qualifying. 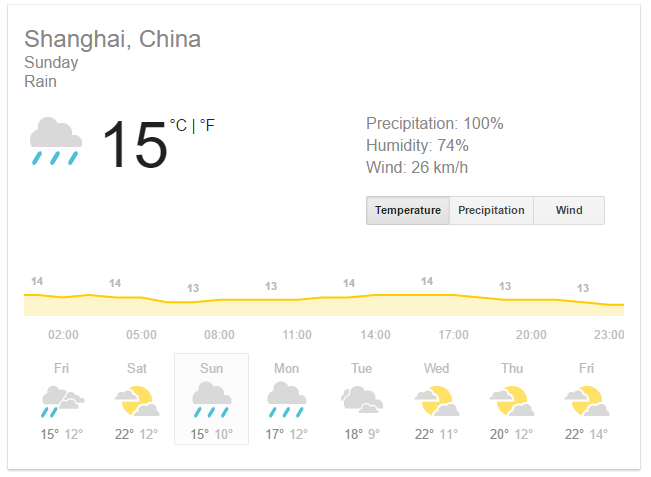 For the race, one condition trumps all others: the weather. While saturday is expected to be run under normal conditions, sunday sees a large chance of showers. In the case of rain, which I expect will at least play some part during the 1.5 hours the race will take. Be it a damp track at the start, a sudden downpour midway through the race, or just an overall wet race as we saw in Brazil last year (please please please). In any case, even if it does stay dry, it will still impact the strategic choices teams will make. They will try to do long first stints in order to not get caught out when or if the rain starts falling. This means a situation similar to Hamilton’s after he made his pitstop is unlikely to occur again.

At the time of writing, though, there is no rain predicted between 13.00 and 16.00h, so I am not going balls deep into a wet race prediction. I do think Verstappen will outpace Ricciardo in the race due to the conditions. Furthermore, there is an option for more surprising results behind the top 6. We might even see a McLaren snatch a point, if their engine holds it together. While Alonso DNF’d in Australia, it was a suspension failure which caused his retirement. Both Honda engines seemed clear from any problems during the race, which is remarkable based on pre-season testing performance. Anyway, the conditions for my prediction are set, let’s look at it!

I know it is not the most radical prediction out there. You might even think it is boring. While I do think it will rain at least a bit during the race, it will not be enough to create the chaos as it did in Brazil 2016. Having a Merc-Ferrari-Merc-Ferrari top 4 is me playing it safe, as I honestly have no idea how the performance of the cars relates to the other. Grosjean showed in Australia he feels right at home behind the Haas, but reliability is a problem. Therefore, I think it will be Magnussen to DNF during the race creating a spot for Ocon in my top 10.

Massa might come close to beating at least one Red Bull, but I don’t think he will be fast enough around the corners to overtake either of them on the straight. He will be able to overtake Grosjean. Furthermore, I doubt Stroll will make it to the finish, especially once it starts raining. I suspected he would drop out during the Australian Grand Prix, and he did. I wouldn’t say he will DNF this race as well, but he will make an error which puts him out of point-scoring contention.

What do you guys think? Does your prediction align with this one, or do you have a radically different opinion? Let me know, either in a comment, or on reddit.com/r/formula!