The F1 Oracle – Predicting the results for GP #07: Canada

In this series of posts I attempt to predict the top 10 of both the qualifying session and the race ahead of qualifying. I will enter these predictions on GuessTheGrid, a website which takes your top 10 predictions and ranks them against other’s. Feel free to sign up and battle me for the title of F1 Oracle – but first, read on what my prediction will be for the 2017 Canadian Grand Prix and why I think this prediction will ring true come sunday afternoon (local time).

Before I will present my prediction, let us take a look at how my prediction for the Monaco Grand Prix worked out.

This was, for me, a terrible result. Okay, sure, I had predicted a Ferrari 1-2 in qualifying, but I had the order wrong. On top of that, Lewis got shafted by Vandoorne hitting the wall exiting the swimming pool chicane and missed out on Q3, while Vandoorne himself made it in. This meant that the balance I predicted was broken and it all fell down like a house of cards. My score of just eleven points might even be my lowest ever – but I’m not bothered enough to actually check four years of predictions.

The race result wasn’t much better since I couldn’t account for the mishap in qualifying – once I set a prediction, I will not go back and change it. Still, Vettel overtook Raikkonen which meant I got four points for him. I had put Hamilton second, something which I knew wouldn’t be possible after qualifying.

All in all, it was a dreadful result which I am keen to bounce back from. Sadly, my overall position on the leaderboard dropped from 9th to 20th, and the gap to number 1 grew from 17 to 27 points. I hope I am able to compensate for this deficit in the coming race(s). 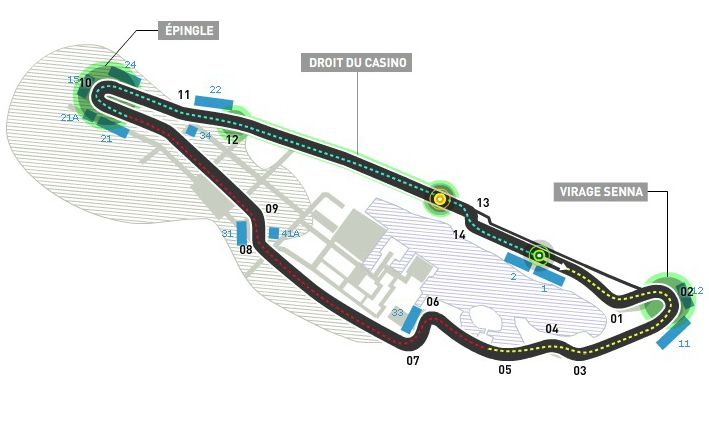 Ferrari and Mercedes look to be on equal footing around this track, perhaps with a slight edge to Mercedes. I expect it might very well be another 1-3/2-4/ or even a 1-4/2-3 split between them. Furthermore, I think it might run close between the Red Bulls and Force India’s during the race as the Mercedes-powered Force India’s have a great advantage on the back straight. It all depends on whether they can keep up and get close enough to overtake on the winding first part of the track. I expect Red Bull to have enough punch to see them off, but expect some fun battles in the early phase of the race for P5-P6.

Behind them, we have a very packed midfield with Massa’s Williams, McLaren (!), Toro Rosso, Haas and Hulkenberg’s Renault. Stroll and Palmer are too far off their respective teammates to play a role in this race.

(Sidenote: I’m actually starting to think it might be better for Stroll to sit out the rest of the season and try again next year, as the gap between him and the once retired Felipe Massa becomes ever more painfully clear with each session. Yes, Palmer is in the hot seat for replacement as well, but at least he doesn’t damage the car as often as Stroll does. And hey, Grosjean came back stronger as well after Renault sidelined him halfway through the 2009 season, only to return in 2012 for Lotus. Stroll is actively damaging his reputation as a driver by now.) [/rant]

Another factor for Canada will be the brakes. You might remember both Rosberg and Hamilton experiencing massive brake issues in 2014. Brembo posted an infographic about a month ago detailing which tracks were the hardest on brakes, which you can view here. Canada is shown as being the hardest on brakes. Which team saw two earlier brake failures? Right, Red Bull (Max in Bahrain, Dan in Sochi). Just to be sure, I predict either of them to retire with brake issues.

For the actual result, I’m taking inspiration from the Barcelona results, as I feel both tracks are similar in layout and surfacing. As such, I’m going to make another bold move: I’m moving Alonso into top 10 for my qualifying prediction. 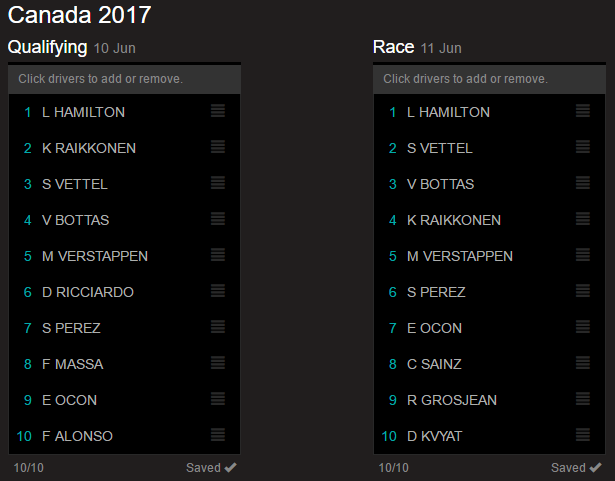 For the race, I think at least one of the traditional top 6 will retire. In Monaco I chose Max, this time I will go with Dan as he was the last of the RB-drivers to experience brake issues. Even if neither of the RB drivers retire, chances are at least one of the Ferrari or Mercedes drivers will with similar issues, as the stress put on the brakes is equal for everyone (unless you go slow like the McHonda’s, then you have no need for brakes at all…!).