Opinion: Why Vettel deserves to be punished for Azerbaijan (more)

A lot has been said about the clash in Azerbaijan, and what I’m about to write might not be news to anyone. Nevertheless, I feel the need to voice my opinion on this subject, as it is currently still a hotly debated subject among fans and even the FIA higher-ups.

But first, you need to know my biases, so you know where this is coming from. I am a Vettel fan. Have been since about 2005, when he became BMW Sauber’s test-driver and he had success in his first Formula 3 season. As a big Schumacher fan, I saw in him his logical successor. I’ve cheered for him ever since. For chauvinistic reasons (I am Dutch after all) I lean more towards Max Verstappen nowadays, but will always have a soft spot for Vettel.

This, however, does not prevent me from being critical of his performance when criticism is justified.

You might say that does not make me a true Vettel fan. If being blind to someone’s faults just because you are a fan, so be it: I am not a real fan. It won’t change the way I identify myself, but if it makes you feel better: sure.

There’ve been numerous occasions before (such as his clash with Webber in Turkey 2010, or Multi-21 in Malaysia 2013). More recently, his behaviour in the 2016 Mexican Grand Prix was unacceptable. Yes, it provides good television and a lot of drama (which gets us fans through the two-or-so weeks between each race weekend) but I do think Vettel has an issue. An anger issue. I will come back to this statement later, but first, let me explain (in detail) what happened this time around in Azerbaijan. (PS: Well done Baku) 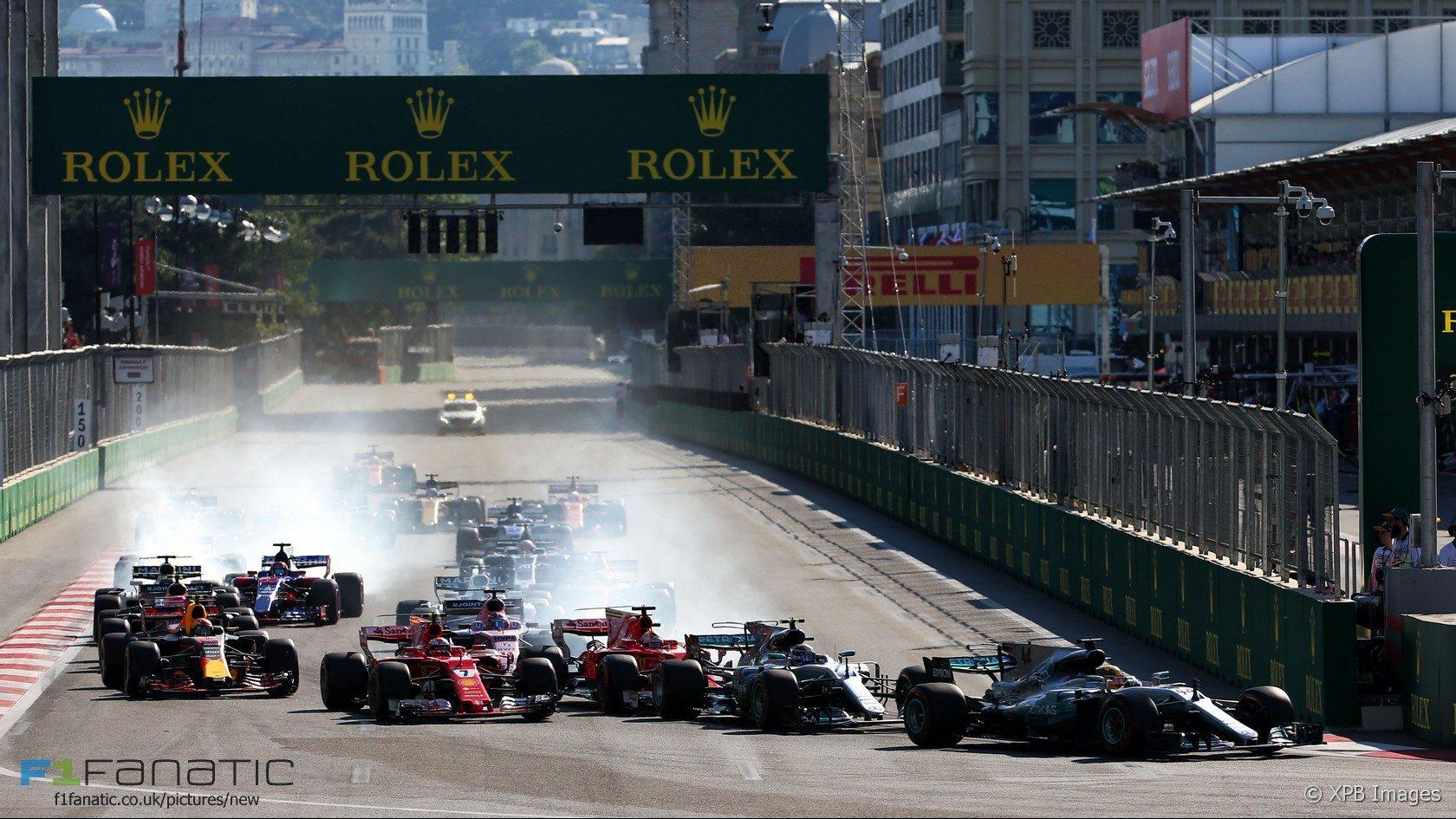 The field entering the first corner of the 2017 Azerbaijan GP after the start. Credit to F1Fanatic.co.uk for the picture.

After the Azerbaijani marshalls were unable to recover Daniil Kvyat’s broken down Toro Rosso, a safety car (SC) came out. It took an unbelievably long time for it to go in. For non-racing fans: once the safety car lights go out, the driver in front is allowed to dictate the pace of the field. Cars behind are not allowed to overtake cars in front. The first car then tries to race off while the ones behind are not expecting him to, to gain an advantage. Most often, the first car of the bunch goes full throttle in the final slow corner of the track, as distance gained on slow speeds is multiplied on higher speeds (i.e. a distance of 10 meters at 50kph is equal to 60 meters at 300kph).

Due to Azerbaijan’s long start-finish straight, Hamilton (the car in front) almost overtook the SC before he was allowed to do so. Remember this little fact.

After this first SC, another soon followed as there was still a lot of debris on the track as a result of multiple clashes before the first SC, which marshalls had failed to collect during this first period. When the lights of the SC went off, it was once again Hamilton’s job to get enough distance between him and the safety car for him to go full throttle coming out of the final slow turn, turn 15.

However, Vettel had been caught off-guard during the previous release from the SC, and was probably determined not to be caught sleeping again. This meant that he was following Hamilton extremely close.

Hamilton went through the second-to-last corner (turn 14) at the same pace he did after the first SC period. However, this time around, he did not accelerate after leaving the corner. Vettel expected him to do so, but failed to notice Hamilton not speeding up, leading to Vettel hitting the back of Hamilton’s car.

He brake tested me! What the fuck is going on? – Vettel, on his teamradio.

In the heat of the moment, Vettel thought Hamilton had brake checked him (where a driver intentionally brakes in order to ‘scare off’ the car following, which is prohibited in F1). Vettel immediately steered alongside Hamilton, took his hand off the steering  wheel, and bumped wheels with Hamilton’s Mercedes by steering into him.

Vettel hits Hamilton and gets a little airborne. Picture from the official highlights by Formula 1 (0:07)

You can review the incident (from multiple angles) on this video (click) provided by the official Formula 1 channel. The picture above is taken from 0:07 into the clip.

During the race, Vettel received a 10-second Stop-and-Go penalty. Furthermore, he was handed three penalty points to his name, putting him at a total of nine points. These penalty points remain for a 12-month period, after which they automatically expire. Once a driver has twelve penalty points, he is handed a one race ban. Since this system’s inception in 2014, no driver has accumulated more than eight points in this twelve month period. F1fanatic gives a nice overview of Vettel’s past penalties leading up to his current score on this article.

On top of these penalties, Auto Motor und Sport (AMuS) reports (article in German) that Jean Todt, former Ferrari team boss and current head of the FIA, is exploring whether to bring this case before a special court, the Court of Arbitration for Sport (CAS) in Lausanne, Switzerland. This court is mostly notable for its cases against alledged users of doping in athletics and cycling, but they take any case regarding sports as long as it is not a criminal offense.

Previously, Vettel’s tirade in Mexico would’ve come before this court had he not formally apologized for the incident.

In this case, however, Vettel denies the incident took place. I once again refer to the video I linked earlier, but this time at 1:50. He refuses to take blame for what clearly was his fault, and furthermore states that his action after that was justified because Lewis was the first offender.

On the other hand, Mercedes’ team boss Toto Wolff thinks the matter should be forgotten about now, which is a very PR-thing for him to say. Had he called for further measures against Vettel, opinion on him and his team would sour as they are currently battling Vettel for the title. This runs parallel to how Ferrari complained about the McLaren’s width during the 1976 season, turning Hunt into an instant fan favorite. I don’t think Wolff actually thinks the matter should be forgotten about, but in his position (being three time consecutive WDC and WCC-winners) he and his team would become subject to fan’s hatred.

However, Lewis Hamilton (as much as I dislike him) was not, as illustrated by this excellent graph by reddit user mrpranz using telemetry data he gathered from the official Formula 1 app. The graph shows a steady decelaration for three seconds from 90kph to 50kph which was caused by him releasing the throttle. If Hamilton were to have touched his brake, even by a little, you’d see an immediate jump of decelaration by at least 10kph in about 0.1 second, as can be seen at around 7 seconds into the graph where both drivers went from 150kph to 130kph in one tick.

The same graph also quite clearly shows that Hamilton was not much slower in this corner than the first time they were released from the SC.

Vettel is entirely in the wrong. What he did might not have been dangerous, but it creates a precedent. As the interviewer asked Vettel, it would create a precedent for younger drivers (be it in karts, Formula Vee or any other junior series). The punishment Vettel has received up until now had very minor consequences, especially because Hamilton had to enter the pit because his headrest came loose.

As I recounted earlier, Vettel has a history of these type of incidents. I believe it is because he has anger issues. These anger issues result from his fanaticism behind the wheel. I firmly believe the stories that, outside the car, Vettel is one of the most down-to-earth and likeable guys. But once he puts on his helmet, his competitiveness fully takes over any rationale he has, resulting in incidents like this and Mexico. He is like a bull in a bull fighting ring, full of uncontrolled adrenalin.

I am not advocating any far reaching punishment, like scrapping points from the current standings. I don’t think the CAS has the authority to do so, unless specifically granted by the FIA. But the CAS could grant a monetary fine. The punishment should show that actions have consequences, but they should not meddle with the high tension that is the 2017 F1 WDC. It should be both symbolic and not symbolic. 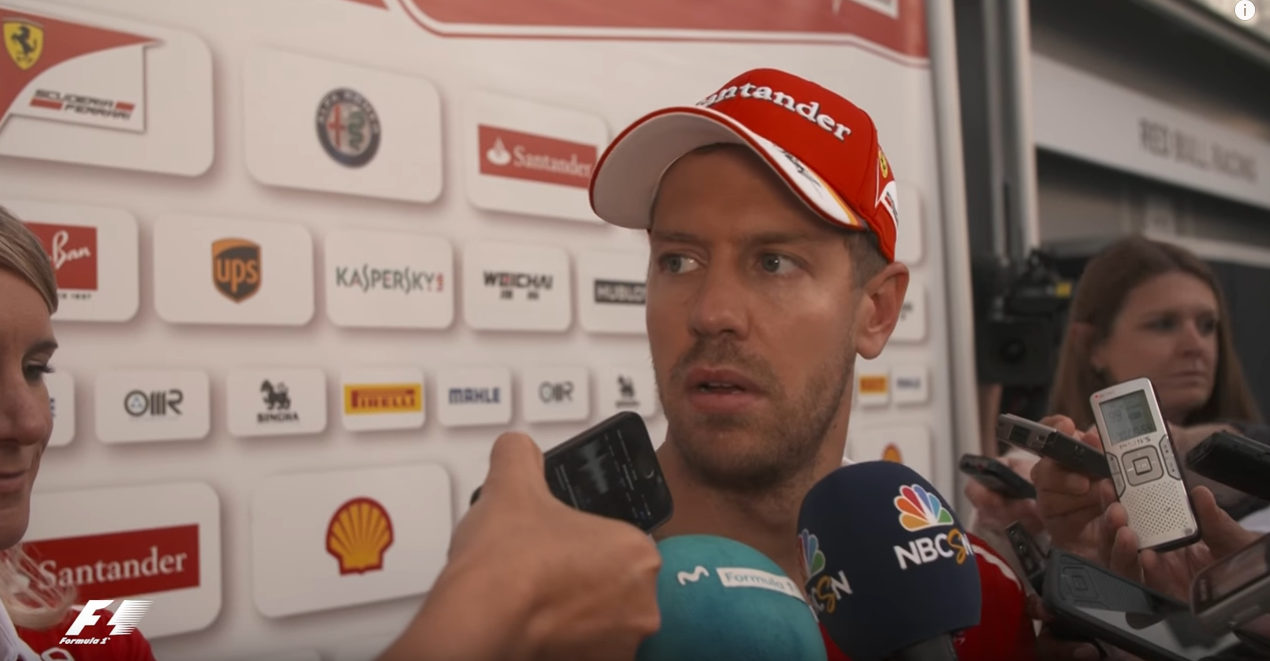 Then what do I propose the punishment to be? Lets start out with a monetary fine. Vettel’s salary reportedly earns 30 million dollars (plus bonuses) each year. He would laugh off a fine like 50.000 dollars. No. I propose a fine of one million dollars. To be paid to one or multiple racing-related non-profits. Hell, have him pay a sum to Billy Monger’s fund. A sizeable donation to Michael Schumacher’s foundation for patients with brain damage. As it is a fine, I don’t believe it can be tax-deductable (but don’t quote me on this), so he can’t profit from it.

Furthermore: have Vettel go to mandatory ‘Anger Management’. Perhaps it might not work. However, there is a lot of ridicule for drivers who need some sort of psychological counseling. Somehow, it is one of the biggest insults you can make to a driver. Last year, Lauda called for Max Verstappen to get counseling. A few years back, Grosjean was called upon to get his head checked.

Having Vettel go to mandatory sessions would maybe bruise his ego a bit. Hell, it might even open up his eyes that the way he sometimes reacts is not normal, even for an F1 driver.

Still, I love Vettel, for his fanaticism and for his dedication. But, he (and many of his fans) is unable to reflect upon his own wrongdoings. If Vettel wants to be the great champion that he thinks he is (and the numbers, truly, back it up), he should be able to acknowledge things like this.

He can do better.