Emma Watson, star of movies like ‘Harry Potter’ and ‘The Perks of Being a Wallflower’, was rumoured to have her nudes leaked. It turned out to be a hoax, and was widely reported. The hoax itself, however, was another hoax, orchestrated by someone or some group. This article tries to find some truth in all the rumours.

On the 21st of September a fairly unknown site called FoxWeekly.com went viral. The topic being a story about alleged leaked nudes of Emma Watson. The site linked to a page titled ‘Emma You Are Next’, and featured a four-leaf clover – the logo of 4chan (nowadays often referred to as halfchan, since the exodus to infinitechan/8chan started). Fingers were therefore quickly pointed at 4chan as the responsible party, and a social media initiative called ‘#ShutDown4chan’ re-emerged. You can find a screen cap of the original post by FoxWeekly linked here. This coincided with a speech Watson gave a day earlier at the UN, at the start of the ‘HeForShe’ campaign of which she is a representative.

The speech (which can be found in this link) advocated for the participation of boys and men alike around the world to better the position of women in their respective communities. Many countries around the world, mostly non-Western states, still feature oppressed women who are handled as objects rather than individuals. Countries like India, where rape is the fourth most common crime. Or Saudi Arabia, where women aren’t allowed to even drive a car. These instances indeed need fixing, so why then would 4chan try to blackmail miss Watson with nude pictures to pull her support from the campaign? Spoiler: they don’t. It’s hoax. No, it’s a hoax of a hoax.

4chan: An Easy Target
Most of the internet, and especially 4chan, has a long-standing conflict with ‘RadFem’ (Radical Feminists) and ‘SJW’s’ (Social Justice Warriors). A longer explanation of this conflict can be found here. These kind of feminists rarely use sound argumentation structures, often based on logical fallacies, to attack matters that aren’t even in such a dire need of addressing as compared to other problems that actually occur world-wide. These people congregate on websites like LiveJournal and Tumblr and create a microcosm in which their own first world problems are the centre of attention.

4chan, in turn, likes to mess with these people. Partly because they are easy targets, getting upset at even the tiniest mention of an opposing viewpoint. As some kind of weird joke, they’d for instance post a quote from Adolf Hitler and say it came from Martin Luther King Jr., to try to get these people to agree with them for their own enjoyment. These are then shared back at 4chan, and the more outrageous a statement you could get someone to agree to, the better.

4chan has a long history of trolling. Even their trolling-motto, ‘Trolling is an art’, is meant to induce rage. This ranges from attacking comment sections of individual videos, to setting up elaborate and large-scale hoaxes. One example,  (October 2012)  was spreading misinformation through social media, in which tween-star Justin Bieber was announced to have cancer. They even set up the twitter hashtag ‘Bald4Bieber’, to encourage young fans to shave their heads to show sympathy to Bieber. This netted a few results in actual people shaving their heads, before word got out it was only a hoax.

This animosity, as well as a WHOLE lot of other things (such as the leaking of earlier celebrity nudes, which was attributed to 4chan but actually happened on Anon-IB), has led to 4chan gaining somewhat of a misogynist reputation. Therefore, creating a hoax and pointing to 4chan as the culprit, is at first glance, based on earlier events, actually quite believable. This isn’t to say 4chan is truly misogynist, but with all communities, there’s bound to be a few rotten examples. Perhaps a bit more of them reside on 4chan.

The Hoax
This is where things get kinda technical. I’m not really technically gifted, so I might make a few mistakes in trying to convert the specifics to layman-terms. The website FoxWeekly linked to, emmayouarenext.com, forgot to mask their server address. This led people to find that the server of this website was hosted on the servers of a certain company called ‘Rantic Media’. This company claims to have done marketing jobs for some very big companies, ranging from NASA to McDonald’s.

The twitter account for this Rantic Media, had about seven tweets, and over 220K followers. Each of these followers retweeted the story by FoxWeekly, and neither of these accounts seem to have any followers or any real tweets. These are most likely bots. Rantic, in fact, has a history of creating hoaxes. They claimed, for instance, to have been hacked by Anonymous to release the game GTA5 to PC, based on their alleged connection to Rockstar – a connection Rockstar has denied existed.

After discovering all of this, emmayouarenext.com changed their countdown timer to a black page, with 4chan’s four-leaf clover with a big stop sign pasted over it and the hashtag ‘ShutDown4chan’ (as pictured atop this page). This rotates to certain messages, the first being: “SPREAD THE WORD! Join us as we shut down 4chan and prevent more private pictures from being leaked. None of these women deserve this and together we can make a change.” The second message boasts about the effectiveness of the hoax, with supposedly over 48 million hits to the page, 7 million facebook shares and 3 million twitter mentions. 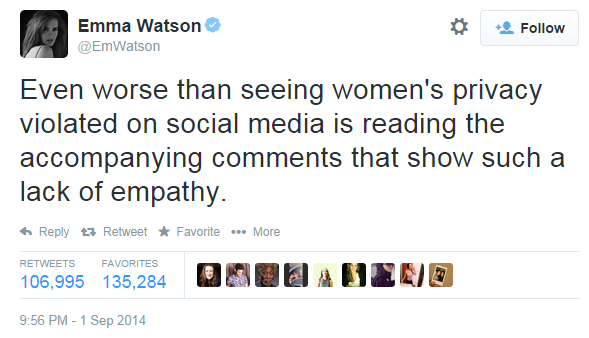 On top of that, there is a huge interest of people looking for Emma Watson nudes (see here). This interest stems mainly from people who grew up watching her in Harry Potter, in which she went from ugly duckling to a mature and (if I might say so) very pretty woman. People don’t see her as just some celebrity, she is like a childhood friend who you never got the chance to confess your love to. Nudes of her are a mythical purple dragon, chased after by many. There are, if you search for it, a lot of professional –grade photoshops of her face placed on top of a naked woman. The real deal probably doesn’t even exist. However, even the slightest mention of them existing, combined with the heightened anticipation of the Second Cumming, meant that a lot of otherwise non-gullible people took the bait anyway. Call it wishful thinking, or cognitive dissonance.

Also, want to know why the title, and this subtitle, has ‘incite drama’ in it? Well, it is an anagram of Rantic Media. This is all just a cleverly constructed hoax, made at the right time, with the right means, on the right subject. Was this the work of one of 4chan’s enemies? Was it an SJW/RadFem? Was it a disgruntled ex-4chan user who left for 8chan? No.

The most likely culprit, is /pol/. This is another board, just like /b/ and /v/. The title on the board is ‘Politically Incorrect’. And yes, they are politically incorrect. Most large-scale jokes stem from /pol/. They once orchestrated/pretended an invasion of SJW’s was hitting /b/, putting /b/ on retaliation mode by attacking tumblr. One of their latest efforts revolves around ‘Ebola-chan’, a Manga-style character who cheers on Ebola to kill as many people as possible. Recently, An Ebola-chan flyer was distributed around a Swiss hospital, where someone carrying the disease was being treated at the time. Even though this is a shitty thing to do, you’ll have to admire their dedication to their so-called ‘jokes’.

This hoax, however, is not an orchestrated event. It is more likely the work of a very tech-savvy user (he would’ve needed a large network of twitter bots, and the knowledge to operate them) on /pol/, who was just simply bored. But why would he demand 4chan be shut down? Well, because he wanted to have a huge reaction from the website he himself visits. The guy is sitting in his own fart, and enjoys looking at the people who try to find the source of the smell. He is trying to incite drama, and incite a war of internet-communities. It’s like the movie Tomorrow Never Dies. The guy is probably having a good laugh. Especially if you consider the registered CEO of Rantic Media is a person called ‘Bill Cockingham’.

What Now?
Well, you can lay down your pitchforks. No one’s trying to shut down 4chan. At least, no one other than the regular crowd. There are no nudes of Emma Watson, and neither will there be in the foreseeable future. Not every celebrity makes nude pictures of themself. Emma Watson seems highly intelligent, having graduated from Brown University May 24th of this year, and being a representative invited to speak at the UN. I am not saying people who take nude pictures of themselves are dumb, but Watson seems to understand the ramifications of such pictures leaking.

Is it possible to decipher the identity of the one responsible? Maybe. I’m not too tech-savvy, so trying to hack Rantic’s website is probably way too high above my abilities. I could take an educated guess though.

The culprit is easily bored. He is tech-savvy, but still makes some mistakes, possibly due to inexperience. He’s also pretty careless about his future and has a superiority complex. He did this to have fun, and probably has done this type of stuff before. This sounds like a typical 16/17 year old’s behaviour.

Edit: I’ve now learned that this is done by a group called ‘Frenzy’, formerly responsible for Youtubechannel ‘SocialVEVO’.

If you’d like some further reading on Internet Culture, I’ve got you covered: