The F1 ‘Oracle’ – Trying to predict the results for GP #09: Austria

Before I will present my prediction, let us take a look at how my prediction for the Azerbaijan Grand Prix worked out.

I know my Monaco GP result was bad, but this was even worse. I could feel it coming watching the results of FP3 (wherein Mercedes suddenly found the pace), but as this post-format prohibits me from making any changes I didn’t change a thing. After qualifying, it was clear: Mercedes reigned supreme, but I was unable to anticipate for the race. Luckily, the race was such a chaotic shitfest that nobody scored a decent amount of points, with the best result netting just 15 points.

My total of just 21 points is actually the worst result I ever had on a prediction (I’ve been participating in GuessTheGrid since 2014). After clawing my way back to 16th in Canada (with a gap of 22 points), I dropped down to 24th with a gap of now 30 points to the (new) leader, Heyflo, who overtook Kimiice. 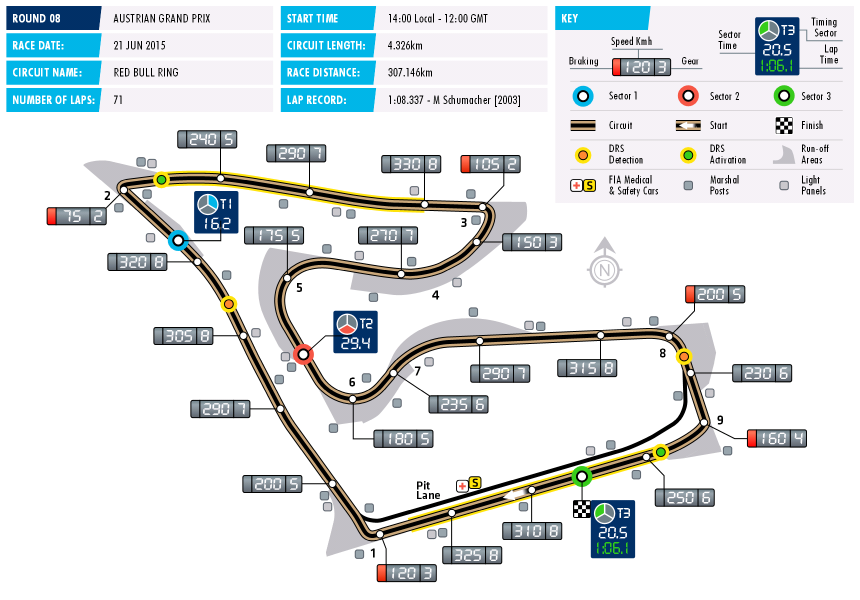 Traditionally, at least for the couple of years since the A1 Ring made a return to the calendar rebranded as Red Bull Ring, this has been a Mercedes circuit. The Red Bull Ring is famed for its long straights, it’s hairpin, short length and even shorter lap times (1:05 in FP2!). Ferrari is inching closer in terms of lap times which is proven by Vettel’s P2 in FP2. However, seeing Raikkonen not up there seems to me it was Vettel pushing extra hard to challenge the Mercedes drivers. I reckon Mercedes has it in them to see off the Ferrari challenge again, and comfortably get a 1-2 (in qualifying, at least).

I think it will actually be closer between Red Bull and Ferrari than Ferrari with Mercedes. Yes, Red Bull lose a lot on the straights, but I think they are especially strong in from turn 3, eh, turn 4 onwards (the FIA upgraded the kink before turn 2 to a real corner, making it turn 2 and the hairpin formerly known as turn 2, turn 3). However, those sectors are dreadful for overtaking, hence I think Ferrari will be able to see off the challenge posed by the Red Bulls – at least during the race.

The Force India’s haven’t shown any pace as of yet, but I reckon they have the Mercedes engine to achieve a comfortable 7/8th spot. Williams, which is historically strong here, will most likely complete the top 10 barring any technical problems with the cars in front. Especially now that Stroll finally found where he hid his talent in 2016. 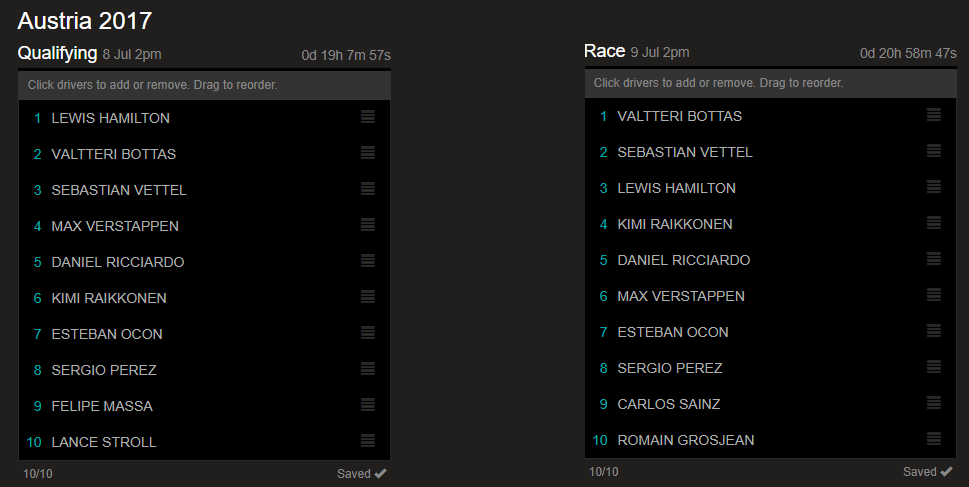 As Hamilton had a five place grid penalty, news which dropped just as I’m typing this up, he will start from 6th or lower. I think he will be able to split the Ferrari’s, but will have trouble with Vettel. Therefore, I think it will be a third place for him.

I put Kimi on 6th for qualy, as I’m unsure whether he will be able to keep the RB’s behind him in qualy. Furthermore, if Kimi does come in 4th, than maybe Max could come in second, minimizing my points loss. For the race though, I think Kimi does have the package to comfortably overtake both Red Bulls on the straights. It all depends on the start though – if he gets stuck behind a Force India, it might become a whole other story.

The reason for me putting Williams in my qualy prediction and not in my race prediction is me just playing it safe. Most often when there are a couple of retirees, it’s usually Sainz or Grosjean profitting. That is why I put them in there.