As the 2017 Formula 1 season draws near, many fans flock to F1-related pages in order to keep up with the latest developments as teams test their new cars before the season starts officially on March 24th, 12:00h local time in Melbourne, Australia – when the lights for the first free practice session of the Australian Grand Prix turn green. In these series of posts, I will transcribe the most important stuff happening on track on an hourly basis, and follow it up with an analysis based on 2016 testing results. This post will detail the goings-on at the Circuit de Catalunya for the second day of testing, on February 28th. If you want to know more detail about these pre-season tests, or want to know the importance of it, feel free to read this post first. For the recap and analysis of day 1, you can click here.

9:00: Thirty seconds after the lights turned green, Raikkonen was the first to take unto the track, followed by Williams’ rookie Lance Stroll, Sauber’s Wehrlein temporary substitute Giovinazzi and Haas’ Kevin Magnussen. Vandoorne and Verstappen also exit the pit box, but soon after Vandoorne stops at the start of the pit lane and has to be wheeled back into the garage. Hamilton is the first to set a time, sporting a remarkable looking double T-wing. Stroll posts his first lap times, but spins when searching the limits of the car, causing a very short (one minute) red flag in the process. He managed to keep the engine rolling, so he was able to drive away from the incident but heads to the pits anyway. Meanwhile, Verstappen is topping the charts with a 1:24.794.

10:00: Vandoorne has been able to get a few laps in, the problem being not so terminal as yesterday. Raikkonen is pushing for faster lap times, setting a 1:23.718. For about fifteen minutes, Verstappen is the only one on track, until Raikkonen comes out again to improve his fastest time to a 1:23.359, but by then, Hamilton has already obliterated Kimi’s time by setting a 1:21.766. Almost two hours into this session, Ocon leaves the pits for the first time, Force India having fixed the exhaust problems which cut Perez’ testing yesterday short. 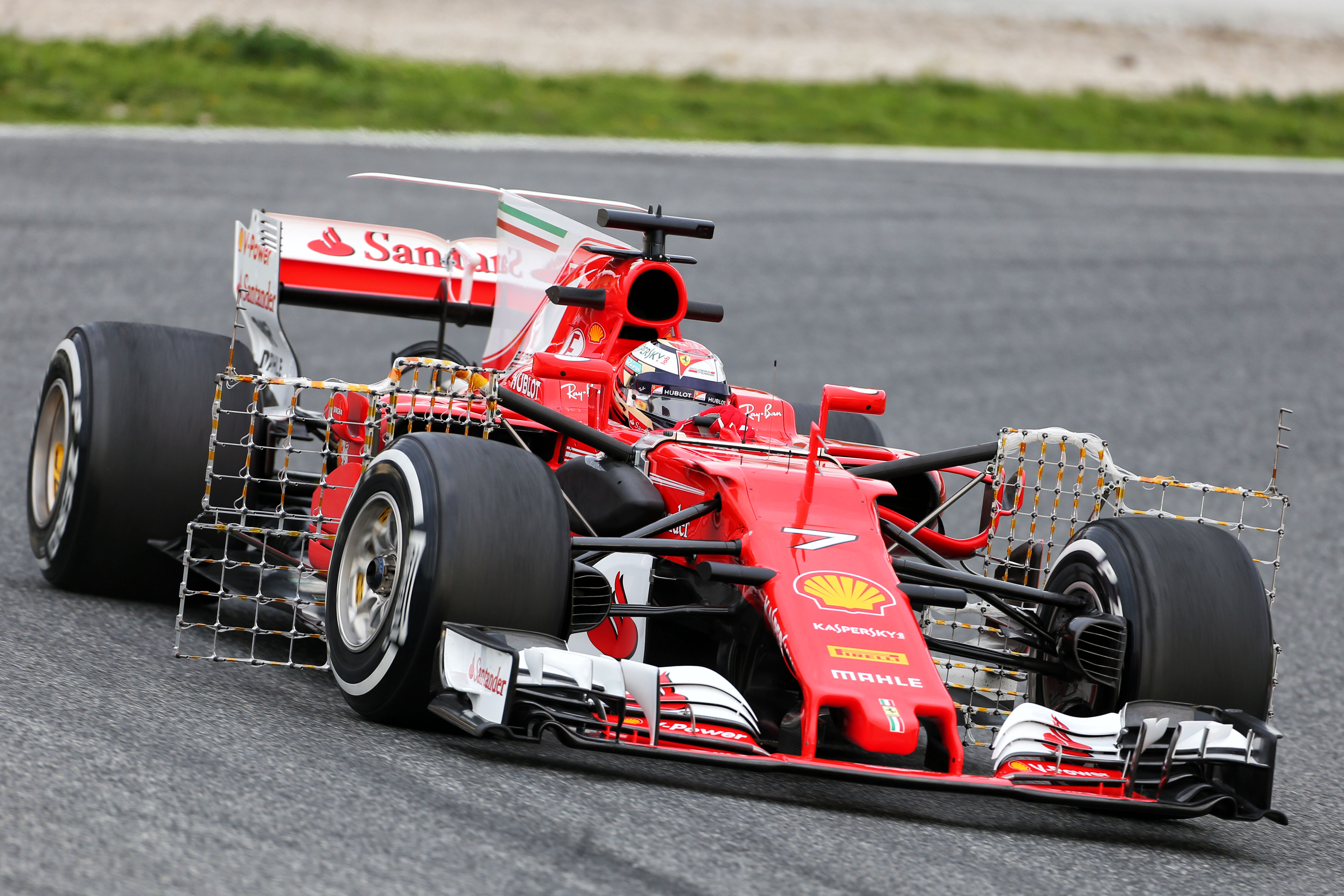 11:00: While Magnussen and Giovinazzi had yet to set a time, Palmer hasn’t driven his Renault out of the garage yet without any word about what is taking them so long. Magnussen, at least, leaves the pits and recorded a time, slowly approaching the 1:24-mark and breaking it just before the hour is over.

12:00: At the turn of the clock, Hamilton was the first to drive fifty laps, while Ocon sets a speedy time of 1:23.180 putting him above against former F3-rival Verstappen in third. Verstappen improves himself to a 1:23.627, but stays fourth. With everyone gradually improving, Hamilton takes a different stance and sets a blistering time of 1:20.963, making good on the promise I made yesterday that we will see high 1:20s – albeit a day late. With just fifteen minutes to go, Ocon causes the second red flag of the day, parking his car in the turn 10 hairpin having to be towed away. The session is extended by a few minutes, giving Palmer a chance to finally exit the garage for a outlap, but heads in right after as the checkered flag to mark the end of the morning session drops.

14:00: Green flag, and Giovinazzi went out to set his first timed lap. Soon thereafter however, there is another short red flag, but green is shown within a few seconds. Palmer and Bottas (taking over from Hamilton) set their first lap times as well. Raikkonen sets a 1:21.198 which is still slower than Hamilton’s fastest, but Raikkonen did it on soft tires, while Hamilton had the super soft fitted on his car. His fastest on the normal soft compound was 1:21.7.

15:00: Word gets out that Williams is unable to continue today after Stroll’s spin through the gravel, citing damage to certain parts they don’t have a replacement for on location. This means Stroll’s first day behind the wheel was cut short within the first hour of testing, having posted only twelve laps. Meanwhile, Raikkonen keeps pushing his Ferrari on soft tires to the limit, surpassing Hamilton’s fastest time by .023 second: 1:20.960. Mercedes is the first to pass the 100-lap marker today, after Bottas enters his 35th lap. His fastest time to that point is 1:22.986. 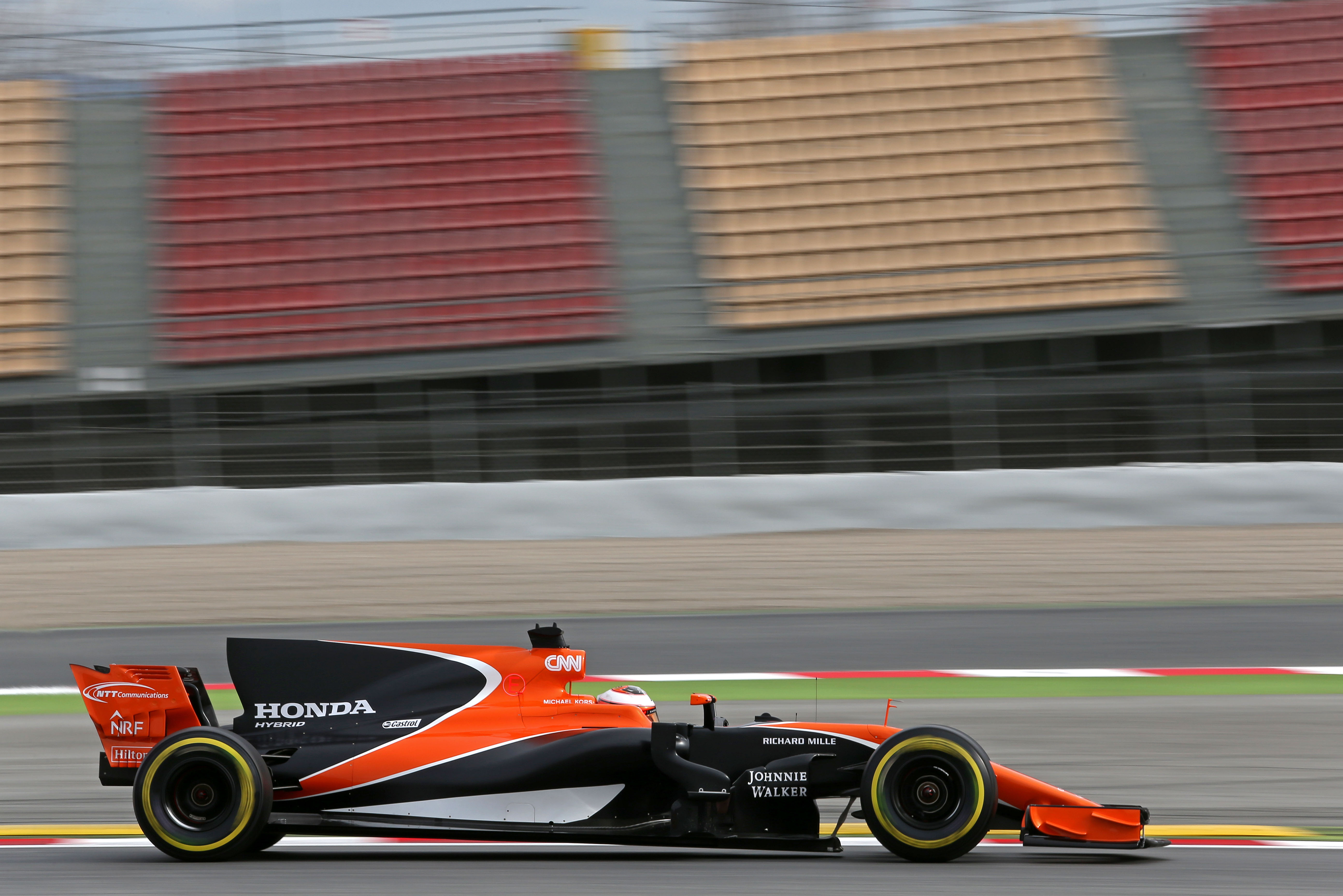 16:00: McLaren announces they have done a full power unit swap and will be heading back out later today. At 16:46, Vandoorne is finally sent out again, with just over an hour to go. It is just an installation lap though, to check whether all systems are running.

17:00: Magnussen is the first driver to hit 100 laps, soon after followed by Raikkonen, resembling Vettel’s work ethic yesterday. Vandoorne tries another installation lap. With Raikkonen, Verstappen, Ocon, Bottas and Palmer on track with only half an hour to go, it gets busy on track again. Vandoorne finally sets a lap time, 1:25.600 on the soft tire. He is the last one to improve upon his position, as the checkered flag drops for a second and final time today.

To compare these results like we did yesterday, we need to take the weather into account. In 2016, the second day of testing was held on February 23rd. At that time, it was a tad cloudy with temperatures between 15-17 degrees Celsius in Barcelona, with mild winds reaching (like yesterday) 15km/h. Today, temperatures reached 18 degrees, but with quite a stronger wind (reaching speeds up to 40km/h). These are not winds that will severely impact the performance of the cars, meaning that weather will not play a deciding factor in any large differences in times (.1-.2s at most). With the weather in mind, let’s look at the differences in lap times on day 2 between this test, and last year’s. 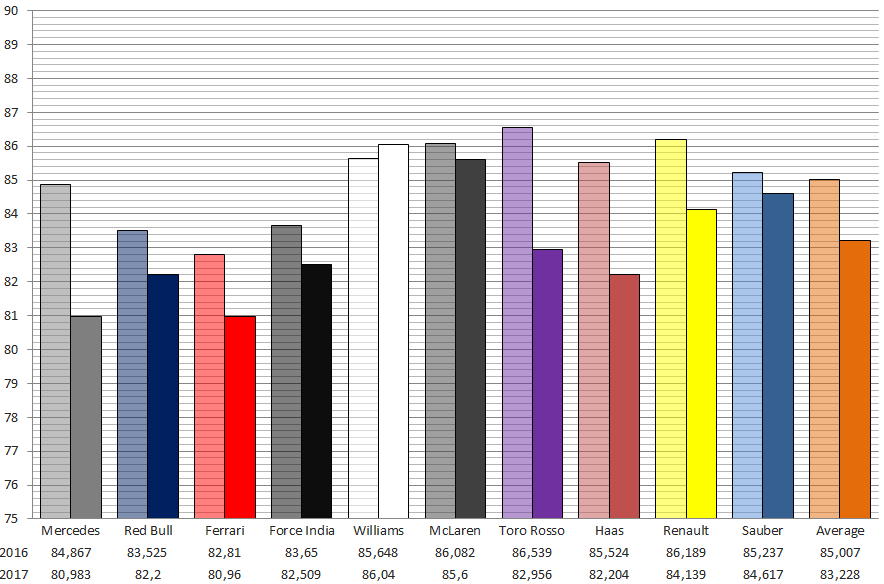 Last year, the average of fastest lap times on the second day was 1:25.007, a decrease of 1.794%. Yesterday, the times decreased by an average of 3.6%, so I expected today to have an average of 1:21.000 to 1:21.121, which I boldly predicted on reddit. Alas, it was not to be. The average time came to 83.228, but this number is likely skewed by the problems experienced by Williams and McLaren today. Yet still, subtracting those from the average still nets an average time of 1:22.571, half a second over my projected average. Oops.

Mercedes, again, looks to be most stable. They drove a total of 167 laps between Hamilton and Bottas. Ferrari looks a close second, and they have the reliability to back it up, but they always go balls to the wall crazy during testing – withholding nothing from the competition. For Ferrari fans though, the performance of Haas (running Ferrari engines) should be seen as encouraging, but this optimism can also be tempered by Sauber’s lack of speed. Sauber, however, did not have the best of days but still managed to get in 66 laps. [edit: I forgot Sauber is still running the 2016-spec Ferrari engine, their performance does not affect the 2017-spec engine]

Red Bull, still sandbagging, is where I expected them to be: over a second of the pace from the top runners. Newey has stated that they will slowly start adding updates to the car to improve upon the basis they now have, so expect them to gain grounds the coming two days, or next week. As for Renault, Toro Rosso and Force India, they had rather unremarkable days today. McLaren, or, (more appropriately) Honda, has certain issues they need to figure out since their reliability looks to be even worse than in 2015. The graph below shows the total laps driven per car for the first two days. Unfortunately for Williams, they could only do 12 laps today due to Stroll’s spin, but I have no worries about their reliability, as the other Mercedes powered car from Force India is doing fine. 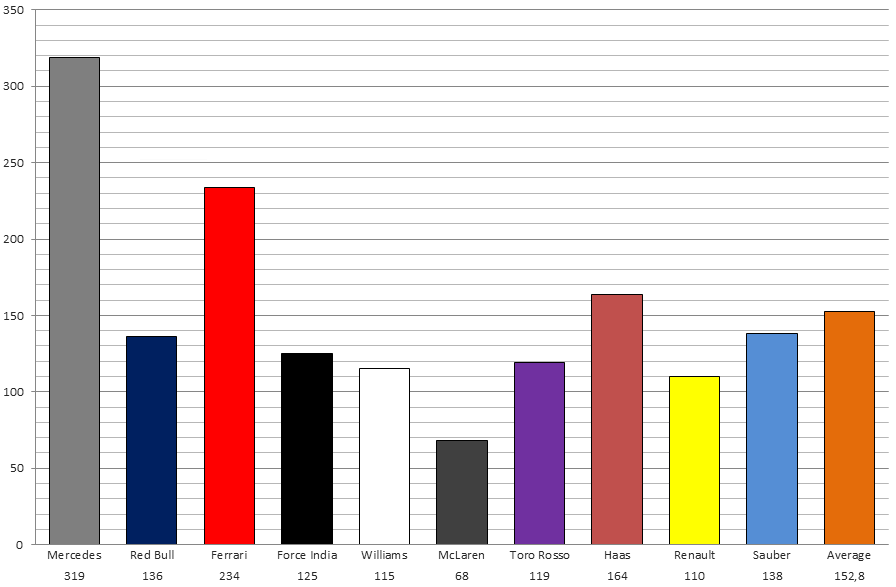 Tomorrow will mark the third day of testing. Last year, average times were up by a little as teams went for longer stints for race simulations, and more development testing. I expect the teams who experienced technical issues today and/or yesterday (McLaren, Renault, Sauber and Williams) to punch above their weight in the rankings tomorrow, as they have a lot of catching up to do. Red Bull especially will probably be testing loads of different aero elements, as they have not done as such up until now. Ferrari will probably be on top again, making Ferrari fans giddy for the season. Average lap times last year were down as well as compared to the second day, so don’t expect too much fireworks. 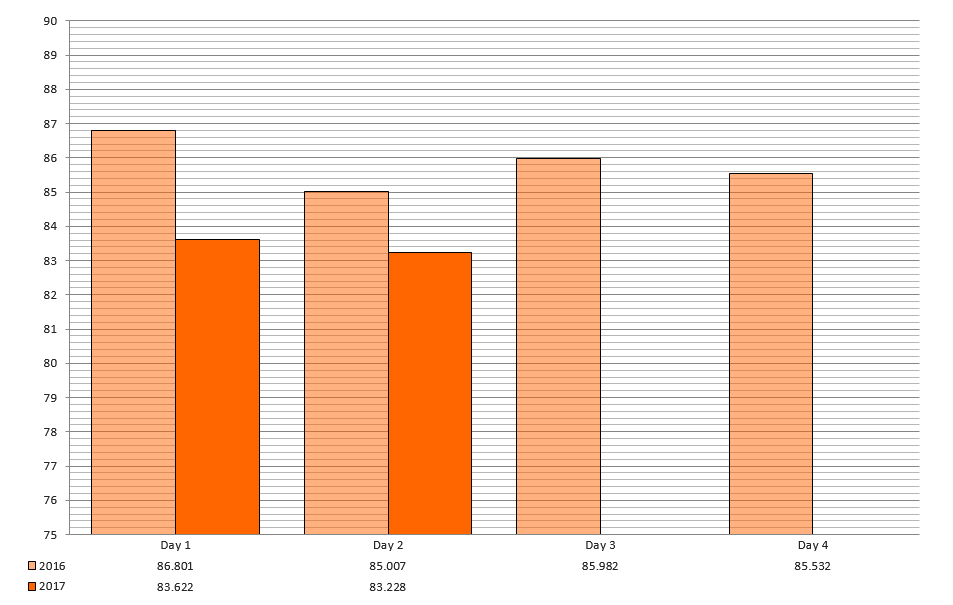 I hope you enjoyed reading this as much as I enjoyed writing this. Stay tuned for the third day wrap-up and analysis tomorrow, as well as the fourth day on thursday. Saturday I will post a large write-up consisting of all data gathered through these tests, so I hope to at least meet you here again on saturday!