The F1 ‘Oracle’ – Trying to predict the results for GP #14: Singapore

Before I will present my prediction, let us take a look at how my prediction for the Italian Grand Prix worked out.

Well, hell has officially frozen over. Not only did I finished a shared last with only 8 points for qualifying, my girlfriend (marked white) got the top result for this session. I’m not saying she knows nothing about Formula 1, but she does really like “those pink cars”. On the other hand, it shows the unpredictability of the rain soaked qualifying session. It was actually better to know little about F1, as proven by her result. Luckily, there was only a gap of 8 points between me and her, even though we were first and last.

For the race, I had another unremarkable result, but again, only with minor losses in terms of the general leaderboard. My prediction wasn’t helped by the fact that I made it on my phone while drinking a beer in Antwerp during a weekend outing.

My gap of 55 points to leader Kimiice further grew to 60 points. The gap to second place grew from 33 to 39 points. The top ten was within 17 points, but is now 20 points away. I’ve got a lot of catching up to do. 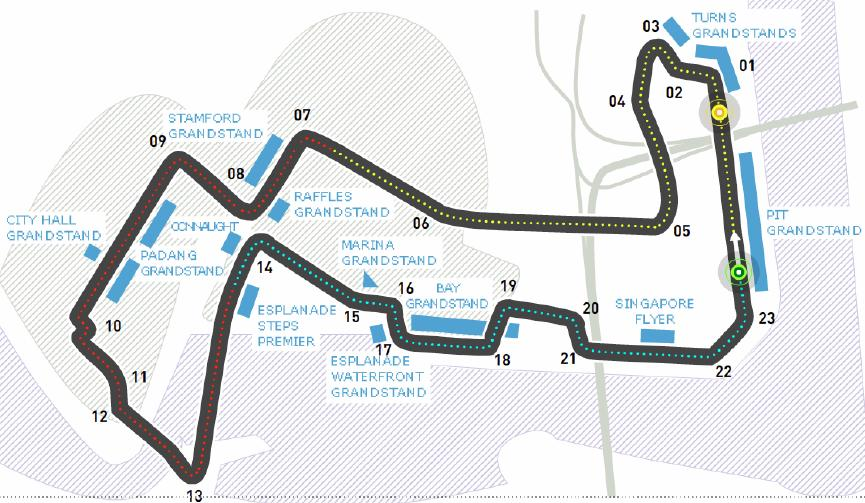 Lets move on to predicting the results for this Grand Prix. The results of FP1, FP2 and FP 3 you can view below:

Singapore is a street circuit with loads of tight corners and short straights, like Monaco and Baku. This is a track Red Bull should excel at, and they are currently showing they have the pace during the practice sessions. The Ferrari’s are up there too, closely followed by the Merc’s and McLaren’s. Hulkenberg is able to toss his Renault in the mix, and the Force India’s too are not far off the pace. The Toro Rosso’s, Williams’s, Sauber’s and Haas’s will most likely not make it into the top 10, unless something happens to their competitors.

It is very likely to become a three-way (or six-way, if you count the drivers) battle for pole. Ricciardo showed genuine pace in FP1 and FP2. Vettel only did long stints on soft tires in FP2, but showed he had the pace in FP1 and FP3. Verstappen is up there as well, with consistent fast times and the fastest time in FP3. On top of that, you should never discount the Mercedes guys, who always seem to be able to bring ‘it’ during qualy – especially Hamilton. Bottas and Raikkonen seem to lag behind a bit, but their car still has the potential for a top finish. I am genuinely at a loss trying to come up with a decent prediction.

Behind them, I feel the McLarens have a very good shot at P7 and P8. Hulkenberg seems set to get P9, while either of the Force India’s will round-up the top 10. I will look at historical results between the two to make a decision on which one I put in.

For the race result, it seems the start will be all important. I think it remains Ricciardo’s race to lose. Verstappen traditionally has good starts, but every time he seems to be in a good position, something happens to him that kills his end result. Depending on the starting grid, the top teams might be able to switch up the running order using strategy. Mercedes might be able to win a spot using their top speed. Honda’s ability to function at all is still dubious, so I doubt both cars will make it into the points. However, if points are up for grabs, Alonso seems to be able to use his experience and steer his McLaren to a decent result. Nothing seems certain.

But, I need to predict something, so here goes.

Starting from the bottom, I chose Ocon because recently, he has been beating his teammate handily in qualifying. Perez has been faster during the free practice sessions, but the gap between them in FP3 was less that .1 seconds. Vandoorne seems a tad slower than Alonso, and I predict Hulkenberg to be between the two. While the McLaren’s are 4th and 5th in FP3, I think the top teams weren’t pushing all that much and will show their true pace in qualifying. Bottas, Raikkonen and Hamilton make up 6th to 4th, with Vettel splitting the Red Bulls in 2nd. Ricciardo’s pace in the earlier sessions was just too good not to grab pole.

In the race, I think at least one of the traditional top 6 will either hit the wall or face mechanical problems. Historically, this should be Verstappen. Alonso might be able to get 6th, with Vandoorne dropping back to 10th. Hulkenberg will be able to stave off the Force India’s, which will climb up during the race to 8th and 9th.